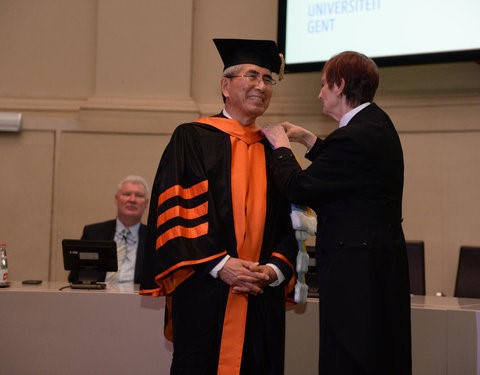 Hisashi Kobayashi, a former Dean of the School of Engineering and Applied Science and the Sherman Fairchild University Professor Emeritus of Electrical Engineering and Computer Science at Princeton University, was awarded an Honorary Doctor Degree from Ghent University on March 22nd, 2019, which was the 202nd Anniversary (Dies Natalis) of this second oldest University in Belgium. https://www.ugent.be/en/news-events/dies-natalis-honorary-doctorates-2019.htm

Kobayashi was honored for his contributions in a variety of research topics, including communication theory, queueing theory, and performance modeling and evaluation of computers and communication networks, which he carried out at both the IBM Research Center in Yorktown Heights, NY (1967-86) and Princeton University, NJ (1986-2008).

Kobayashi and Bruneel met for the first time in the fall of 1980, when Kobayashi gave a series of lectures on “Queuing theory” as an International Professor in Computer Science of Belgian NSF, hosted by Université Libre de Bruxelles (ULB). Mr. Bruneel, a Ph.D. candidate at the time at Ghent University found Kobayashi’s lecture on “discrete-time queuing models,” especially intriguing, which then influenced his Ph.D. thesis and his subsequent research, so recalls Prof. Bruneel.  Kobayashi remarks: “I feel extremely lucky that I had Mr. Bruneel in the audience 39 years ago. I am just happy to learn that my lectures impacted his research.  I am overwhelmed by his extraordinary kindness to recognize my humble contribution in such a significant manner like granting me an honorary degree.”

Kobayashi served as a director of Friends of UTokyo, Inc. since its inception in 2007. He succeeded Mr. Junji Masuda and served as its president from 2011 to 2015 when Prof. Masaaki Yamada succeeded him. Currently Kobayashi serves as the chair of FUTI’s Advisory Committee.