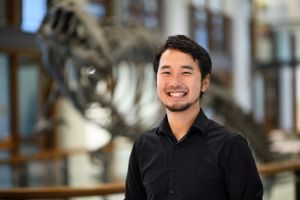 Yuki Haba
Princeton University Department of Ecology and Evolutionary Biology, Doctoral Candidate
FUTI Global Leadership Award 2015 Recipient
In the spring of 2015, I was conflicted. I was about to graduate from the University of Tokyo in April and I was faced with two paths. I could either continue to graduate school at the University of Tokyo or at Columbia University, an Ivy League school. I very much wanted to attend Columbia, but the expensive tuition made that option difficult. Winning the FUTI Global Leadership Award was the deciding factor in this choice. The FUTI Award allowed me to get a head start on my English skills and on life in general in the US, as well as financial support for my summer language studies and living expenses for before graduate school started.
In this short essay, I would like to report on my activities during the two years since receiving support from FUTI, from overcoming unforeseen hardships at Columbia to ultimately receiving top acceptances for the doctoral programs at universities such as Princeton, Harvard and Columbia. 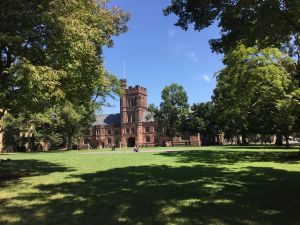 Feeling encouraged after receiving the FUTI Global Leadership Award, here I was at Columbia University in the fall of 2015, barely keeping up with my language studies and the general curriculum. On top of everything, I had to search for Teaching assistant (TA) and Research Assistant (RA) positions to help with tuition and living expenses. Now that I think about it, I am amazed that I survived those days of living under such stress. To be honest, at UTokyo I was on the athletic club soccer team spending much of my days playing soccer and was not exactly on the Dean’s List. In my last year I redeemed myself in Basic Biology but considering the rigorous American methodology I am surprised that Columbia University even accepted me. However, the competitiveness and drive that I cultivated while playing soccer helped me through the adversity I faced. My mind was a blank slate, like a sponge absorbing knowledge, and after studying like mad I started seeing results by the second semester. I obtained a TA position, then an RA position and eventually I earned the trust of professors other than my advisor. My master’s thesis, essentially a synopsis of my two years at Columbia, garnered high commendation and even won out against my American colleagues to receive the award for best master’s thesis. 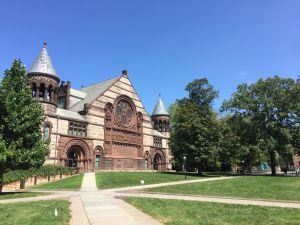 Whether it was because the research I did for my master’s thesis was so much fun, or because I felt the urge to get more ambitious with bigger projects, I was certain that I wanted to continue to a doctoral program (PhD) in the United States. In 2015, I had also tried to get into a PhD program at a prestigious school but because of my exclusive focus on soccer at the time, I was not accepted. I vowed not to make the same mistake again and took early action by making appointments with professors I wanted to study with. In these meetings I expressed my enthusiasm and in the discussions with professors all over America I was able to hone in on my interests.
At the end of 2016 came the long-awaited PhD application process. The application material and oral examinations lasted for three to five days at each university. My performance was received very positively and I was accepted to Princeton University, my first choice, along with scholarships at Harvard and Columbia (tuition-free and approximately $3,000/month stipend). Having redeemed myself after receiving so much support from the FUTI scholarship and from friends and family, I was glad to have been able to repay their trust by showing results. After reporting to the Ichokai in New York, I was congratulated by many people. I feel forever indebted to FUTI.
“The human thought: why was it born and on what mechanism does it operate?” This is what I would like to spend my lifetime researching. On first glance, this seems to be a philosophical question. But it’s also a topic that is popular and widely researched in the field of biology. To solve “why” thought was born, one must unravel the history of life through the theory of evolution. To solve “how” thought is expressed, one must utilize neuroscience and molecular biology. As long as I undergo research which transcends the boundaries of existing areas of study, I don’t intend to narrow my interest but would rather enjoy myself by cooperating with researchers not only from the U.S. or Japan but from all over the world. Going forward I would like to make exciting discoveries as a researcher, not a student. 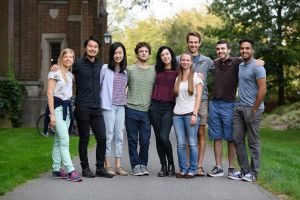 In September 2017, classes for the doctoral program at Princeton started. I feel as if I am on cloud nine studying at my dream school where I am intellectually stimulated on a daily basis by my brilliant colleagues from all over the world. Studying abroad for graduate school is still not a commonly known choice for many in Japan and financial uncertainty is a nagging problem. Despite this, there must be plenty of possibilities for success with an organization like FUTI which gives opportunities to students with aspirations. If one feels that there may be an opportunity across the ocean which will allow them to pursue their dream, I feel it is a good thing to take that leap.
Finally, I would like to thank FUTI for giving me the chance to do my graduate studies abroad and for the opportunity to write this report. I received support not only through the scholarship, but also through the New York Ichokai community which was there for me during tough times while I was at Columbia. I would like to extend my heartfelt gratitude.
Author: Yuki Haba. He encourages readers to contact him directly for questions at