UTRIP Internship with Professor Hiroaki Aihara Department of Physics, The University of Tokyo

by Thong Nguyen
The University of Texas at Dallas, Class of 2015
— 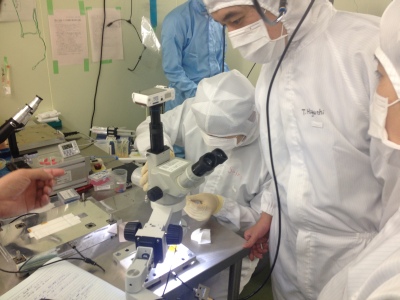 Carved in my mind is the moment I received the acceptance email from UTRIP along with the FUTI scholarship award, which blew away the anxiety about midterm exams coming in late-March. Excitement piled up day after day for the long journey to discover the frontier of high energy physics, to explore the new land, and to learn about a different culture—something that I had always dreamed of. Six weeks working at the University of Tokyo left me with a deep impression, not only about the world-class research facilities, but also about the professionalism and discipline, as well as the generosity of the people I met. 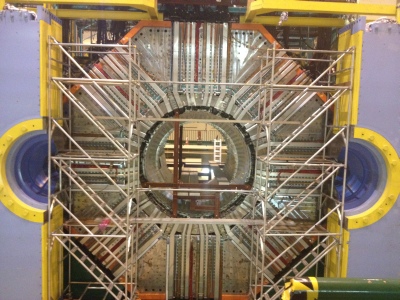 High energy physics, also known as elementary particle physics, is driven by the quest of finding the ultimate answer for the fundamental question: “What is the universe made of?” Here in Japan, physicists collaborate to work on a B-factory, namely SuperKEKB, to produce numerous particles called B mesons from electron-positron annihilations to study CP-violation, a key to understand the domination of matter over antimatter in our universe. The Belle II detector at SuperKEKB records information of the produced B mesons at the collision point for further analysis. The Belle II project is an upgrade from the Belle experiment, which had successfully operated for more than ten years, contributing to the Nobel prizes shared by two professors Makoto Kobayashi and Toshihide Maskawa in 2008.
Major upgrades of the Belle II detector include the Silicon Vertex Detector (SVD) that I worked on over the course of six weeks under the guidance of Professor Yoshiyuki Onuki in the Aihara group. In the production of the SVD, we conduct a testing experiment with beta rays from Strontium-90 to verify the functionality of every strip. On the development of the beta testing system, an accurate determination of the energy deposited in the double-side strip detector (DSSD) is of significant interests. However, this energy deposited is difficult to determine experimentally; therefore, a simulation study is necessary to acquire the expect value for the energy deposited. I developed a software to simulate the geometry and physics processes of this SVD testing experiment to study the energy deposited in the DSSD, using the GEANT4 toolkit. The results of my work are crucial for the testing stage of the SVD production, which starts in October 2014. 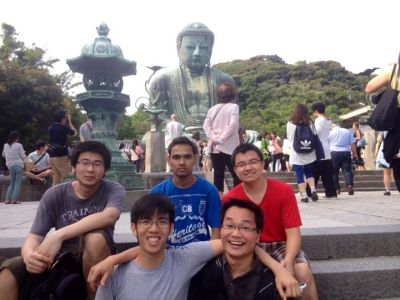 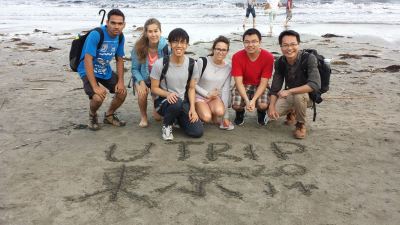 After six weeks, not only did I augment my research skills, including programming and experimental techniques, and deepen my knowledge about high energy physics, but I also learned about the prospect of fundamental scientific researches in Japan. I had a chance to visit the Kavli Institute for the Physics and Mathematics of the Universe, where I gave a talk about my research, and KEK in Tsukuba, where I witnessed the real Belle detector at the KEKB accelerator, the world’s highest luminosity machine. The thrilling atmosphere spread all over these institutes, where people were excited introducing their research projects, meticulously explaining new technologies and the underlying theories to me. Everyone engaged in a spirited research environment, promising a bright future for the basic science in Japan. 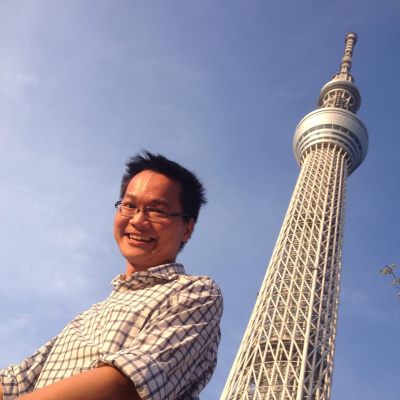 Research aside, the picture about my summer would not be completed without the vivid pieces of cultural experience. A field trip hosted by UTRIP to Iyashi no Sato, a traditional craft village, fostered my appreciation for the dexterity and creativity of the Japanese. Here I learned how to make paper from fibres, attended a tea ceremony, folded an origami crane, and tried on a full kimono set, which weighed no less than five kilograms. The daily life in Tokyo was no less fantastic. Japan might easily have the best foods in the world; even the low-priced bento (lunch box) sold in the convenience stores was of excellent quality. Not to mention tempura donburi, tsukimi soba, gunkan, and other wonderful cuisines whose names I cannot recall. I witnessed the beauty of nature in Japan through weekend hiking trips in Kamakura and to Takao-san. An excursion to Oedo Onsen Monogatari for a hot spring bath and sauna softened my mind after a long week of work. 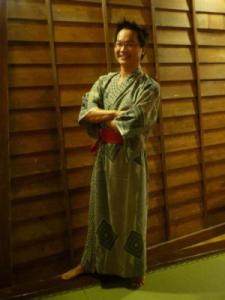 The most memorable experiences, however, were with people I met during six weeks in Tokyo. There were overnight parties with my fellow UTRIP friends, in which some embarrassing photos we took might become the best moments when we grow older and look back on the past; there was a sleepless night followed by an early-morning mountain-hiking trip in heavy rain; and there were the long walks home with my labmates in late evenings, during which they had to tolerate my terrible singing (and sometimes dancing). The last day was a hard farewell. For the first time in my life I received a ton of goodbye gifts. Perhaps the word “nice” is not enough to describe the Japanese, but my limited vocabulary could not find another word that is beyond diplomacy and cultural doctrine, a word that blends sincerity and kindness.
Those six weeks are over, yet my fondness for Japan has just sprouted. My deep gratitude goes to UTRIP, FUTI, Aihara-san, Onuki-san, Denis, my labmates, and my fellow UTRIP students. Altogether they orchestrated a wonderful summer that went far beyond my expectation—a summer of intellectual adventure, cultural discovery, and memorable companionships.