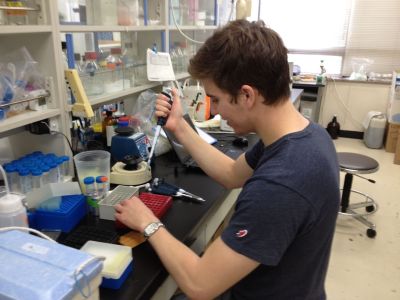 This summer I had the opportunity to travel to Japan through the UTRIP program at Todai. There I participated in frontier research in the Tei Biochemistry Lab. Professor Tei’s lab studies a variety of topics centered on the study of small RNAs through cell culture and computational analysis. My project focused on microRNAs, a type of small RNA.
My goal for the summer was to generate knockouts of three different miRNA genes in HEK293 (human embryonic kidney) cells. The genes I was attempting to knockout are thought to contribute to the regulation of the biological clock in mammals. Over the course of the summer I learned how to culture cells and how to perform a variety of techniques of molecular biology including transformation, transfection, cloning, PCR, luciferase assays, endonuclease surveyor assays, and sequencing reactions. By the end of the summer I had successfully generated knockouts of two out of the three miRNA genes I had been targeting. Overall my experience in the lab was successful, educational, and memorable. 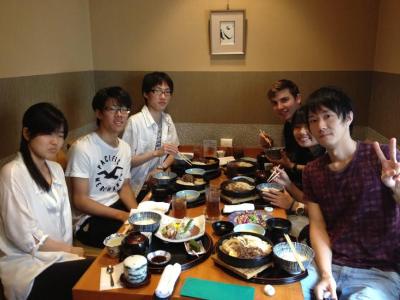 The lab was extremely accommodating. Multiple times throughout the course of the summer Professor Tei and the lab members treated my fellow UTRIP labmate and me to meals at local restaurants. The younger members of the lab brought us to the Ooedo Onsen. I had never been to anything like it in America, and I found the experience relaxing and therapeutic. My mentor and I frequently discussed American baseball and the famous players from Japan that play in America. At the end of my stay, he treated me to GoGo Curry after promising me that it would be like no curry I could buy in America. He was right. 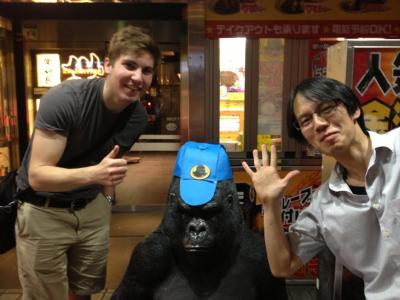 Outside of the lab I had an incredible time enjoying all that Tokyo had to offer. I have always loved Japanese cuisine, and eating it for every meal was a constant source of happiness for me during my stay. I am also a big fan of Japanese beer and sake, and I was able to indulge many times throughout the trip. Though the food and drink was great, I would have to say that my favorite part of the summer was visiting the Ueno Zoo and Epson Aquarium. I love animals and am always on the lookout for zoos and aquariums to visit when I travel to new places, but I had never seen a panda bear before! It was exciting. The pandas were so human-like; it made us wonder if they were really just men in realistic costumes. The Epson aquarium included an unforgettable dolphin show that left me speechless. 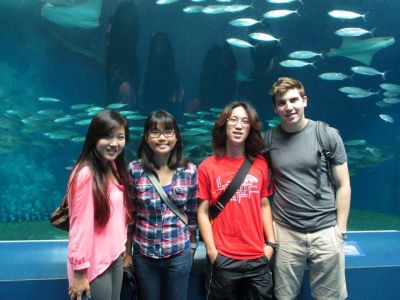 I did not expect Japanese culture to be so different from the American and European cultures I have assimilated to in the past. The Japanese people are extremely polite, accommodating, and generous. On the night of my arrival, I could not find the hotel because my phone that contained the directions had died during my flight. I was amazed by how many strangers gave up their time to attempt to help me find my destination. Even though they could barely understand what I was asking, they tried everything they could to assist me, going so far as to use Google Translate to figure out what I needed and walking with me for almost half an hour. I had never experienced this kind of unconditional kindness in any other city.
The Japanese people treat the city and its inhabitants with the utmost respect. The streets are clean, there are textured surfaces on the sidewalks for the blind, and bike locks are not necessary. This shocked me, since in New Haven, where I go to school, bikes are frequently stolen even when they are locked! Overall I was most impressed with this aspect of Japan. I’ve seen some amazing things when I’ve traveled abroad, but nothing has impressed me more than the respect the Japanese show to one another and to those new to their culture.
Thank you UTRIP, Todai, and Friends of UTokyo for this once in a lifetime experience. I can’t wait to come back.