The scholarship committee chaired by Dr. Masaaki Yamada, Director of University Relations, has selected eight U.S. students and four UTokyo students for this summer’s scholarship program. Several more awards are expected to be given to UTokyo students and a few more to U.S. students, as the GSP (Global Summer Programs) to be held at U.C. Berkeley, Yale and UTokyo announce their selected students. 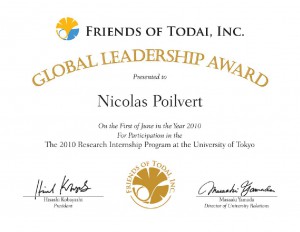 The FUTI summer scholarship award, called the “FUTI Global Leadership Award (FUTI-GLA),” is designed to nurture future global leaders of Japan and the U.S. One of the selection criteria is a demonstration of leadership quality.
The selected four UTokyo students include two who will participate in Yale’s English Language Institute (ELI) and one who will attend Yale’s Summer School (YSS). The fourth is Mr. Mohamed Khalil, an Egyptian Ph.D. student at UTokyo, who will participate in the University of Minnesota’s hydrogeology field program.
In addition to the award that will be given to selected participants in the GSP programs at Yale and U.C. Berkeley, FUTI may give a few awards to outstanding UTokyo students who find reputable summer programs in the U.S. by themselves. Such award decisions will be made over the next few months.
The eight students from U.S. universities will conduct research as summer interns at UTokyo’s science and engineering laboratories. They include six winners selected from approximately 100 U.S. undergraduate students who applied to the University of Tokyo Research Internship Program (UTRIP), which is hosted by UTokyo professors in the School of Sciences. Ms. Sachiko Soeda, Project Specialist of the Program says: “The number of applications worldwide increased from 310 last year to 430 this year, about a 40% increase. In case of the U.S., the number of applicants almost doubled, i.e., from 62 to 123, and many applicants are top students from leading universities. We are grateful to Friends of UTokyo, Inc., which has doubled the number of scholarships from three last year to six this year.”
The remaining two American awardees are MIT students who found their UTokyo hosts through MIT’s International Science & Technology Initiatives (MITSI) program. This is the fourth year that FUTI has provided support to MISTI students.
U.S. Students who won FUTI- GLA
UTRIP (University of Tokyo Research Internship Program) Participants

Participant in Other Summer Schools