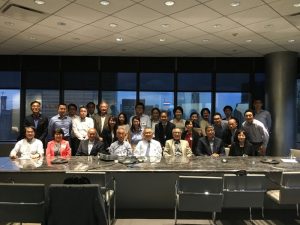 Author, Professor Sadaoki Furui, is Professor Emeritus of the Tokyo Institute Technology and President of Toyota Technological Institute at Chicago (TTIC). This article summarizes his presentation given in New York City on June 22, 2018. For details please visit https://www.todaitomonokai.org/イベント/?event_id1=6880
1. Recent Advancements in AI (artificial intelligence) technology
Artificial intelligence (AI) is a fundamental series of technology where devices such as computers strive to artificially replicate the intelligence of humans. The basic neural network being used in recent AI is a simple format proposed around 1960 which had since undergone continued research by a small number of researchers but with little progress. Around 2006, Deep Learning came into fruition and rapidly became the go-to technology as it boasted a much more effective learning method utilizing the greatly expanded network hierarchy of the Deep Neural Network (DNN), supported by faster computers, faster internet speeds, gathering of big data, and the improvement of environment construction.
Ever since a computer won in a game of Go against a professional Go player in 2016, there have been a series of winnings for Deep Learning enabled AI against master Go and Shogi players in 2016 and 2017, garnering wide public attention of its capability.
As a result, there is now research outside of AI itself on societal matters such as the effects of the rapidly growing AI industry on employment, ethics and morality, human rights, or even risks from a security perspective. It is said that we are currently in a third AI era, following the second one in the 1980’s and the first one in the 1950’s and 60’s. 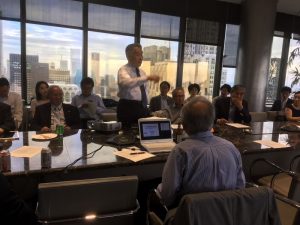 2. The Use of Deep Neural Network (DNN)
Computers in the past required the input of programs and data through human intervention in order to process information like speech, images, video, languages, and Shogi or Go games. On the other hand, in DNN learning, as long as the input and goal output are given, network parameters including feature extraction are automatically optimized. In a matter of speaking, AI can now automatically comprehend the content and make appropriate judgments.
Speech recognition, image comprehension, automatic-translation, information search, robots, autonomous driving, and medical diagnosis are all within the realm of AI and advancements are made in the use of the various mechanisms of DNN. Companies like Google utilize search result data by collecting user data from around the world; accumulating information on languages, speech, images, and video; connecting all this data together; and all the while constantly improving the various AI. Additionally, many research institutions use DNN for analyzing large volumes of documents, collecting and analyzing medical and genetic data, helping to further their research in disease prevention, diagnosis, early detection, treatment, and drug development. DNN is also increasingly being used in areas such as marketing and investment. 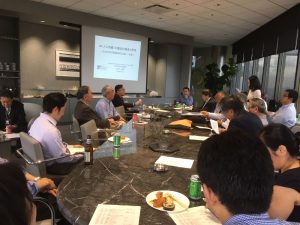 3.Progress of AI and Human Society
3.1 Technical Problems of AI
Since it is difficult to conduct theoretical analysis of current Deep Learning, AI has a technical problem of relying heavily on experience and trial and error in executing analysis. DNN is characterized as a so-called black box. Therefore, it cannot explain why a certain output was obtained for the given input. For this reason, it is difficult to identify causes in the event of an error, and it is hard to predict how AI would behave when and if the “target” deviates from the data used for learning. We do not know yet why the current DNN works so well. In order to fill this gap in knowledge, recently, research has begun to come up with an explanation as to why and how a certain output result has been generated. The field is anxiously awaiting results.
Even though the AI system has limitations such as a difficulty in providing an explanation, its superior performance allows for an increasing number of AI systems being released which surpass human abilities and intelligence. The AI system is able to copy its experience to many other AI systems. That is, AI systems are able to share and consolidate experiences. For example, it is possible to consolidate what 1000 AI machines/systems have learned into one system. By repeating such a process, AI can dramatically increase its learning speed.
In order for AI to make an advancement, a large amount of learning data is indispensable. If the target world is clearly defined like Shogi or Go, it is possible for AI to create a new approach (data). Generally speaking, acquisition of a huge amount of data for learning is the key to significant progress of AI. The (AI) system cannot use data for learning unless it is given a desired output (an answer or “supervised data”). At present, a human provides such “supervised data”. However, human intervention is rather costly so there is a need to eliminate the process. While human beings can learn and recognize at the same time, currently AI cannot do so. It is important to develop a learning method for AI that can operate without being given supervised data.
Human beings have an in-born capacity to develop wisdom, common sense, “a bird eye’s view” and to apply them to various situations. They constantly use “hierarchical knowledge” such as causal relationship, inclusion relation, contextual understanding and the like. An important research challenge going forward is to make these capabilities available for AI.
3.2 Future Impact of AI on Society and Academia
With the development of AI in the future, computers will be able to form judgment based on data and knowledge better than a human due to the further improvement of the former’s performance. The convenience of life will improve in various situations. Based on enormous personal information, AI systems that match personal characters and preference will be created. In addition to corporations and IT companies that specialize in AI, small and medium-sized enterprises, farmers and others will start using AI to increase productivity.  Many tasks currently handled by attorneys, doctors, white collar workers, etc. will be handled by AI.
Over time, AI may outperform human researchers engaged in inventions and patent acquisitions. It might even create dramatic advances in science. AI may outperform the market and do a better job than human leaders in dealing with the masses. Humans may become better off by delegating the handling of difficult international problems to AI.
What would human beings do if AI should take over many of the work that they are currently doing? Can we create a new kind of work that we have never done before? What would be the activities that only humans can perform? This is an important question for which there is no answer yet.
3.3 Can AI and Mankind coexist?
Nowadays many people search on the Internet to obtain answers to various questions before even thinking about them. That means, expansion and substitution of human’s ability with AI is already taking place. In the future, human lives will change as AI and human intelligence will be more closely linked. As discussed before, since AI is a black box, we cannot see its decision-making process. Can we still rely on AI when that is the case? Even now many people appear to almost blindly follow information provided by the Internet.
Although it is good for humans to utilize AI, they should not blindly follow or accept its directions. It is necessary for them to develop a capacity to use AI with their own judgment and creativity, and learn from it. Humans would not have a future if they stop thinking and blindly rely on AI. Therefore, for the education system, it is necessary to develop leaders of the future generation who have creativity, leadership, and entrepreneurial spirit. Traditional emphasis on memorization and test taking skills to help in passing the entrance exam are grossly inadequate.
As AI technology progresses, a major emerging problem is the application of the technology to weapons and military operations. Unmanned aerial weapons have already been made. However development of a lethal autonomous weapons system should be prohibited. It is necessary to preserve an element of human control in the application of AI to military operation instead of fully automating it. It is without saying that the use of AI weapons by terrorists must be stopped at all costs. 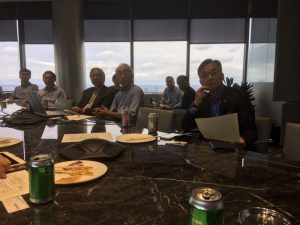 4. Pass Recommended for Science and Technology Research in Japan
Through absorbing human talents and acquiring companies, a group of major companies such as Amazon, Facebook, Google, IBM, and Microsoft are developing AI that target various services and trying to sweep the world by cloud service. In China, they are injecting a substantial amount of budget and talent to reduce the gap with the West. It may be cheaper for Japanese companies to entrust their AI development to foreign companies rather than to develop AI systems on their own. However, in that case, the international competitiveness of Japanese industries will decline sharply. It is extremely important to promote AI development in each company or group of companies while utilizing the cloud system as infrastructure including AI.
Since the AI system has the potential to greatly change society in the future, AI education and research is extremely important for the future of Japan. However, there are very few AI researchers in Japan who are qualified in the eyes of the US who is the most advanced in the field. Currently in Japan, led by the government offices, many research organizations dedicated to AI have been established, but it is essential to nurture young and active researchers in academia. Not limited to AI, in Japan there are too few excellent young researchers who want to go on to a doctoral program at universities. Unless the universities each promote appropriate reforms and the public and corporate sectors significantly increase their support for AI, Japan cannot have a promising future.
For vigorous development of AI, free and flexible cooperation in research and training transcending organizational boundaries such as universities and corporate research laboratories is indispensable. In the U.S., information exchange and collaborative research among academic and industrial entities are actively pursued: this is the driving force for progress. Since the advancement of AI will further accelerate, it is imperative for Japanese professionals to form a close network with non-Japanese scholars from universities, research institutes and companies in Europe and America (which are by far technologically advanced) through collaboration and meaningful exchange at international conferences.
＊For Prof. Furui’s bio, please see https://www.todaitomonokai.org/イベント/?event_id1=6880