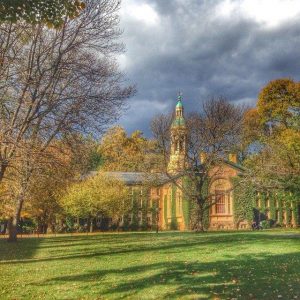 In the year 2015, I was fortunate enough to be selected for the FUTI Global Leadership Award which provided me with the financial assistance to pursue a study program at Princeton University. The reasons for choosing Princeton in particular, were manifold. Firstly, it represented the very zenith of American educational system prowess, which over the centuries has catapulted USA into one of the most developed, innovative and largest economies of the world. I am of the opinion that it is very important for young students and researchers to appreciate and understand the systems and cultures that produce pioneering and revolutionary work so that the same can be replicated elsewhere as well. After all, in the 21st century, when internet has turned our planet into one global village, every researcher worldwide now has access to the same pool of research publications, articles and information. More so, the researchers at major universities and research institutes, even have the same equipment, however why is it so, that some research groups or institutions, out-perform others. This was the first reason or rather first question that motivated me to particularly go after admission in a renowned, ivy-league institution such as Princeton.
The second important purpose was to work under the guidance of Prof Andrew Bocarsly, who is very renowned in the field of alternate energy solutions, particularly photo-reduction and electro-reduction processes and materials. And the third main goal was to develop networking and coordination between the Bocarsly lab and my parent group in UTokyo so that the human resource pool could be shared and research of mutual interest could be pursued. I believe that such a collaboration is not just important but in todays’ day and age, has become a necessity. In a world, which has become so connected that an economic report in China, creates ripples in US markets and where a bomb blast in Paris, affects the stock exchange in Australia, it is imminent that the whole world in general, and top researchers and problem-solvers in particular, should join hands to address the most pressing issues of the world. This kind of a collaboration I feel is the next logical step for progress and development, so that diverse minds can focus on to the most important issues of the world. 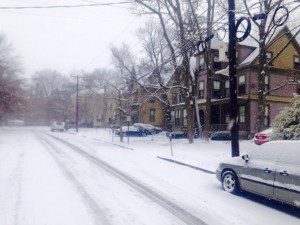 I had reached Princeton during the worst snow storm however the excitement of working at a new place with chance to mint new experiences, made up for the meteorological annoyance. After being introduced to the lab and given a research theme, I was quick to develop my research roadmap since time was of the essence and to get some meaningful results, I had to work fast and efficiently. My main research aim was to assemble and develop a screening system, which could quickly identify certain catalytic properties in any material that was tested in the system. In order to do this, I had to fabricate circuits, assemble the system and test a minimum number of materials for possible photo-reduction properties. 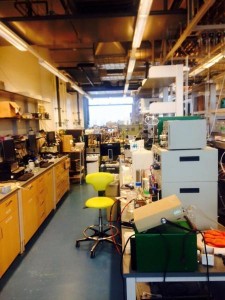 I was fortunate that during the 6 weeks that I spent at the lab, I was able to produce the desired results that were expected from me, and receive the right amount of experience to understand and further pursue research in this field.
During my stay, I also made it a point to attend lectures of certain courses to get a feel of the class environment, and also actively take part in student meet-ups, gatherings and events. I made many new friends from many different nationalities and diverse academic backgrounds which made my visit all the more eclectic and interesting.
During my short trip to Princeton, I also visited Newyork, Philadelphia and Baltimore for 1-day trips to see the most important attractions, restaurants and tourist spots and to get a more wholesome experience of the American culture and society. 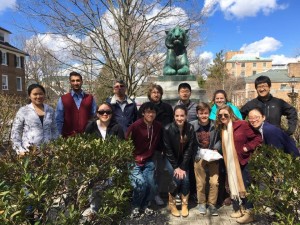 Figure 4: Farewell lunch by the group

After the conclusion of my trip, I discussed with my supervisor at Princeton, Prof Bocarsly on possible collaborative themes which could be carried out. My research group in UTokyo has recently demonstrated the highest efficiency of solar-to-hydrogen conversion while Bocarsly group in Princeton is considered to be at the forefront of pioneer research in such field. The union between two of the finest research groups, with different working environments, but single goal, is certain to bring new and innovative products in the field of science.
FUTI has been the pivotal reason for facilitating my exchange to Princeton and helping with the establishing of a new partnership that would pave way for more human resource development and new groundbreaking collaborative partnership between Princeton and UTokyo.
I would like to thank FUTI and all its board members for giving me the opportunity and helping to build this bridge.
Facebook0
Twitter0
Google+0
LinkedIn0
Pinterest0
FUTI 奨学金