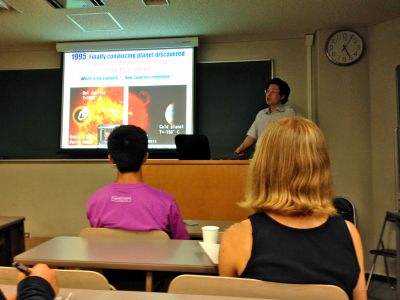 During the summer of 2014, I had a chance to participate in University of Tokyo Research Internship Program (UTRIP) with the financial support from Friends of UTokyo, Inc. UTRIP is an undergraduate summer research internship program with top professors for those who want to pursuing Ph.D. degree in science in the future.
I participated in the Exoplanet Lab in the Astronomy Department hosted by Prof. Motohide Tamura. The main focus of the lab is about direct imaging technique to observe several types of objects such as exoplanets and protoplanetary disks. The data mostly comes from Subaru Telescope which is the 8.2 meter telescope of the National Astronomical Observatory of Japan (NAOJ), located at Mauna Kea Observatory in Hawaii. My research background is astrophysics, mainly exoplanet using transiting technique. Thus, I was really excited once I knew that I would learn this new technique, direct Imaging, to detect planets. Direct imaging planets are extraordinary because we can actually see a planet itself instead of an indirectly observed planet from technique such as transiting and radial velocity. By being able to see a planet, we can confidently say that we found an extrasolar planet and a planet does exist outside our solar system. 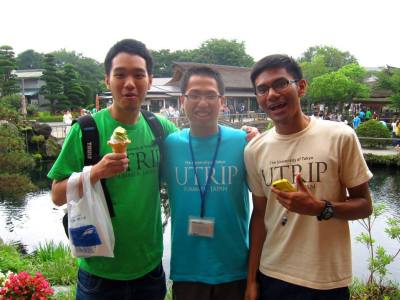 For the first couple weeks of the program, I spent most of my time studying these new techniques in the office. I read couple recent papers about direct imaging and different techniques people use to directly observe a planet. Two main techniques that I learned were adaptive optics (AO) and angular differential imaging (ADI) with the newly developed algorithm called Locally Optimized Combination of Images (LOCI). Once I understood the technique, I had a chance to work on some real data from Subaru Telescope. In fact, the data that I had was the one that was used to find GJ 504b, a new directly observed planet discovered by Prof. Tamura and his colleagues in 2013. I was excited since I got to experience firsthand how to find a planet from real images.
Apart from Prof.Tamura who always helped me with most of my questions about the science of the project. Mr. Uyama, a master student under the supervision of Prof.Tamura, also answered my detailed questions about the software and the pipeline that we used to process the data. In addition, I visited National Astronomical Observatory of Japan (NOAJ) in Mitaka, the suburb of Tokyo, to meet with Mr. Kusakabe, a postdoc at NOAJ who was responsible for raw data I used for the project. It was an incredible opportunity for me to visit the national observatory of Japan during my stay in Tokyo. Moreover, I met two postdocs at University of Tokyo who also helped me with different problems that I had during the project. Without these people, I do not think that I will have a successful project that I had now. 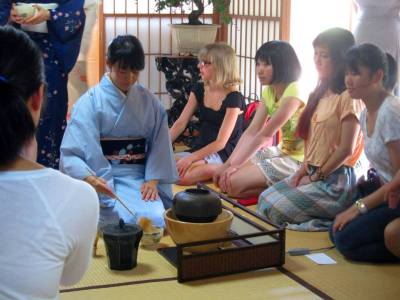 Furthermore, UTRIP also provided other valuable experience during the program. First, the seminars from different professors in different departments were a good and quick way to learn about other people’s projects and learned new topics in science that I would not have a chance to learn. For example, I learned about ‘Fast and Slow Earthquake’ and ‘Bioluminescence’ from the seminars. Although these topics were not in my field of study, I found them really interesting and would like to learn more about them. UTRIP provided not only academic experienced, but also cultural ones such as the Japanese cultural experience and oneday excursion trip to Yamanashi. During the Japanese cultural experience, I had a chance to learn about origami, wear the kimono and attend a tea ceremony. I liked all the activities that we did, especially a tea ceremony which demonstrated how delicate Japanese culture is, in contrast to what I knew as the contemporary Japanese culture like manga and anime. Also for oneday excursion, we went to Yamanashi to visit Iyashi no sato Nenba to learn some Japanese workshops. My favorite place during the trip was Narusawa Ice Cave. I was really excited about the cave once as we learned that it was created from the eruption of Mount Fuji.
Moreover, what unique about this summer research program was how diverse fellow interns were in the program. We came from many countries with different backgrounds and interests. The most precious thing that I got from this program was not what I learned about direct imaging technique since I could learn about it elsewhere, but these new friendships that I had with fellow interns. It was nearly impossible for me to meet this group of people. I met a guy from Czech Republic who are also interested in exoplanets and a guy from Malaysia who was studying in UK. Even though the program was ended, my memory and our friendships with others while staying in Tokyo will remain.
Finally, I am really thankful to Friends of UTokyo, Inc. for all the supports that they provided while I stayed in Tokyo and participated in UTRIP. Without the generous support, I would not be able to participate in UTRIP and gain such incredible experiences for all academic, cultural and social aspects.
Facebook0
Twitter0
Google+0
LinkedIn0
Pinterest0
FUTI 奨学金