New York Lecture by Dr. Yoshinori Ohsumi, Recipient of the 2016 Nobel Prize in Physiology and Medicine 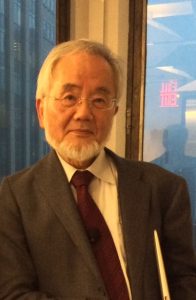 On April 21, 2017, Dr. Yoshinori Ohsumi, Professor Emeritus of the Tokyo Institute of Technology, will give a lecture in New York titled “Reflections Since Receiving the Noble Prize”. The event will be organized by Satsuki-kai America and supported by Friends of UTokyo, Inc.

Professor Ohsumi, recipient of the Nobel Prize in Physiology and Medicine in 2016 for his work on “Elucidation of the Mechanisms of Autophagy,” received his B.A. and Ph.D. from the University of Tokyo. He subsequently enrolled at Rockefeller University in New York for three years after which he returned to his alma mater as first a research assistant and then lecturer in the science division (Rigakubu) where his area of focus was the intracellular transport of vacuoles in yeast. In 1988, he was appointed associate professor at the UTokyo’s Rigakukei Kenkyuka where he started his research on autophagy (the mechanism by which cells break down and recycle cellular components) which ultimately led to his receipt of the Nobel Prize in 2016.

Language: Lecture will be given in Japanese.

Soft drinks and appetizers will be provided.

Photos: Photos taken during the lecture may be used in FUTI’s online and offline publications. Please inform the organizer prior to the lecture if you do not wish to be included in the photos.