An Interview with Dr. Chihiro Kanagawa, Chairman of Shintech, Inc. 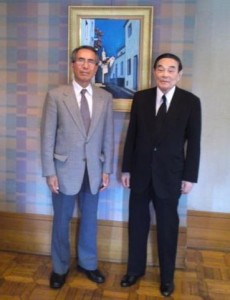 On June 20th, 2012, FUTI President, Hisashi Kobayashi, and Mr. Yoichi Yoshida of the Development Division of UTokyo met with Chairman Chihiro Kanagawa of Shin-Etsu Chemical Co. Ltd. While Dr. Kanagawa served as president, Shin-Etsu Chemical increased its profit successively for 13 years, and Shintech Inc. in the U.S., which is a wholly owned subsidiary of Shin-Etsu Chemical, contributed greatly to it. Dr. Kanagawa founded Shintech and serves as its chairman. Mr. Toshiya Akimoto, Managing Director of Shin-Etsu Chemical was also present. Here is a summary of the conversation that took place over lunch.
Kobayashi: Dr. Kanagawa. It is my great honor to have this opportunity to meet with you. Thank you for taking time to meet with me and Mr. Yoshida despite your busy schedule. On behalf of Friends of UTokyo I sincerely thank you and Shintech for the generous support of FUTI in the past three years.
Kanagawa: I deeply appreciate UTokyo for the education I received. And I also feel that I owe the American people and its society for giving me the chance to establish and run Shintech. Their openness and fairness have contributed a great deal to the success that our company has been enjoying. Hence I am glad that we can help Friends of UTokyo, which promotes exchange programs between UTokyo and universities which are located in the U.S.

Yoshida: You studied at UTokyo under its old system (“Kyusei”). Did you study only at the Hongo campus?
Kanagawa: Yes, in the old system, we studied at a university for three years, preceded by three years at a high school. Before that we studied at a middle school for five years. Some brilliant students took only four years to graduate from middle school and entered high school soon after that. The UTokyo’s Komaba campus at that time was “Ichi-ko ( No.1 Higher School).” I studied at “Rokko (No. 6 Higher School),” which became Okayama University. After graduating from Rokko in 1948, I was admitted to UTokyo, where I majored in Political Science (“Seiji Gakka”) in the Faculty of Law (“Hogakubu”).
Kobayashi: What was your student life like at UTokyo?
Kanagawa: My late father studied law at UTokyo and became a judge. I might have also pursued the judicial world like him, but for some reason I did not like to study law. The lectures on law that I took felt like philosophy or sociology and were nebulous for me. The lecture I enjoyed most was “History of modern Japanese politics” taught by Prof. Yoshitake Oka. I did not find such subjects as codes of criminal procedure and civil procedure interesting, so I am afraid I graduated from UTokyo without really having learnt much about law. I did later study it seriously though when I entered the working world. Studying law which related to work enabled me to act well in severe negotiations.
We Japanese were all poor when I was a student at UTokyo (1947-50), which was soon after Japan was defeated in World War II. All I remember seeing when I came to Tokyo was burn-out areas and black markets. We did not have much to eat, and I was busy earning money by working as a tutor. I do not have as many nice memories about my life at UTokyo as I do about my interesting days at Rokko since it was a dark era after World War II.
Kobayashi: The war ended when I was in the first grade of elementary school. Although my family had evacuated from Tokyo at that time and was in Minami-Saku, Nagano Prefecture, we did not have enough food. Even farmers were not allowed to eat enough of the rice they produced, as the distribution of rice was controlled by the local government. Even when I was a UTokyo student (1957-61), food was not as abundant as we have today.

Yoshida: Did you join Shin-Etsu Chemical immediately after graduating from UTokyo?
Kanagawa: No, the first company I joined after graduation was Kyokuto Bussan, which was one of the several companies created when GHQ dissolved the old MITSUI&CO., LTD. These companies were later merged to form the current MITSUI&CO., LTD. I worked for Kyokuto Bussan for 12 years. I joined Shin-Etsu Chemical in 1962, when I was 35 years old. I became more interested in the business of producing products rather than moving products from one hand to another. Since I studied English seriously while I was with Kyokuto Bussan, I was assigned to the Overseas Business Division at Shin-Etsu Chemical. I soon began to travel world wide to sell the manufacturing technology of vinyl chloride.
Kobayashi: I understand that Shintech enjoys the largest market share of PVC (poly-vinyl chloride) in the world. How did you start that company and why has the company been so successful?
Kanagawa: In the fall of 1972, Robintech Inc., which is a large manufacturer of PVC pipes used for water pipes, approached Shin-Etsu Chemical asking for licensing of our manufacturing technologies. At that time I strongly believed that we should not sell the technologies which were the lifeline of our business, but rather establish a joint venture. Therefore in 1973 we established Shintech in Houston Texas for the manufacturing and sales of PVC. Both Shin-Etsu Chemical and Robintech invested $2.5 million.
Due to the first oil shock in 1973, the price of PVC soared, but then by 1974 the price sharply dropped as a reaction to it. When Shintech started its production in October 1974 under this severe situation, we produced 100,000 tons per year.
Our market share in North America was only 3% and ranked at the 13th position. At that time the CEO of Robintech, which is Shintech’s joint venture partner, was Mr. Brad Corbett. He was a flamboyant business man and bought the Texas Rangers, a baseball team, in 1974. After that, Robintech’s business worsened, and in 1976 the company requested Shin-Etsu Chemical to purchase their share of Shintech stocks. As a result Shin-Etsu Chemical acquired 100% ownership of Shintech.
Kobayashi: So you became the president of Shintech?
Kanagawa: Not immediately. I became Chairman and recruited a president, who used to be a business manager of a large U.S. company. However, I soon found that his management policies and mine were quite different. For instance, he claimed that we should have as many as forty sales people, whereas I believed that two people should have been enough. So in March 1978, I ended up becoming the president of Shintech.
Yoshida: I imagine that you had difficult times, given the geographical distance between the U.S. and Japan.
Kanagawa: At that time, I had to travel between the U.S. and Japan every month and Shintech faced a series of difficult challenges. As a result of the second oil crisis of 1979, the demand for PVC precipitated, and 1980-81 was the most critical period. If we could not sell the products, we had to stop production. I had many sleepless nights. I travelled throughout the U.S. with my marketing staff, and dealt with our customers directly, including matters involving price negotiation. Consequently, we could post profits even in the worst quarter. In 1987 our business expanded rapidly, partly owing to President Reagan’s tax reduction program.
But even in a favorable business climate, we have to be cautious. In order to increase revenue and profits, we need to invest in production facilities, but in the business of raw material production, an incremental increase of production capacity is not feasible. Furthermore, once the new production facility becomes operational, we need to sell enough products to run the facility at its full capacity, so there is always a huge risk associated with investment to enlarge production facilities.
Kobayashi: How large is Shintech now?
Akimoto: Our present production capacity is 2.63 million tons, 26 times larger than what it was in 1974 when we started production of 100,000 tons. Our market share jumped from 3% in 1974 to 36% in 2010. Our ordinary income in FY2011 was $251 million, or JPY 20.1 Billion.
Kanagawa: We have only eight marketing staff to cover all of North America. Since we no longer have any bank loans or any debt, we do not need to have a finance specialist or treasurer. My own secretary is also responsible for collection of proceeds. Our management structure is simple. We have only three directors. I believe in keeping the structure as simple as possible and running the company with the fewest number of competent people.
Kobayashi: Last November, I received an invitation to a reception on November 10, 2011 to celebrate your doctoral degree. Regrettably, I could not attend the party due to a conflict with my speech at an NICT conference in Shinagawa on the same day. My hearty congratulations to you, although somewhat belatedly.
Your accomplishments and your philosophy of life are truly inspiring to men and women of all ages. I hope that your story will stimulate the readers of the FUTI Newsletter, especially the younger generation.
We really appreciate this wonderful opportunity to learn about the invaluable stories about yourself and Shintech. We ask you again for your continued and generous support of Friends of UTokyo. Thank you very much.