by Masato Tsuji
—
INTRODUCTION
At the Yale Summer Session, I took two courses: Brain Science and Electrical Engineering.
This was almost the first time to stay abroad for me, needless to say study abroad. Students were from all over the world: USA, UK, Denmark, China, Congo, Turkey, Indonesia and so on.
Each class was 135 minutes long, on Mondays, Wednesdays and Fridays: Brain science in the morning and Electrical Engineering in the afternoon. In both classes plenty of preparation were required. In the brain science class I had a test Fridays covering that week’s content, and in the electrical engineering course homework was assigned for each class. Thus during the weekdays I spent almost whole day in the library.
STUDYING 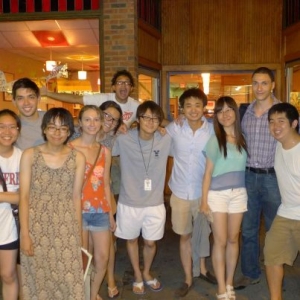 In the brain science course, we used a neuroscience textbook which was 800 pages long and almost the whole content was covered. We had a test on Fridays covering the content of that week, final paper and final exam. Since this course was only five weeks long, we did not cover every small detail as a matter of course. Rather, the concept of how the brain works was emphasized, using her original presentation slides. I found this course very fruitful, because by grasping the overall concepts first, you can learn it in detail much more efficiently. I believe this is the beauty of intensive course. Additionally, the professor of this course was eager to help us learn. When I asked some questions on the e-mail, she replied that day. She revised the presentation in response to the questions she received on the previous day. When I sent her a final paper earlier which was due on the last day of the class, she checked it and gave me many advice including even grammatical ones. Actually she revised my paper as many as three times. I guess she did not sleep during that week. I guess everyone in the class felt her eagerness, and we had many discussions during the lecture, which is unthinkable in Japan.
In the electrical engineering course, some homework was assigned after each class. This course was an introductory course on how the digital devices work, using the textbook the professor himself wrote. Honestly this course was not very good in terms of efficiency. The professor used his textbook as presentation, so there was essentially no need to listen to his lecture: reading his textbook was necessary and sufficient. Thus there were not many questions or discussions during the lecture. Anyway, the content itself was interesting. I had been wondering how computer worked, especially the mechanism of memory, and this course answered this question.
Overall I felt several differences in the course from Japan. First, students tended to ask questions more frequently during the lecture. So we often had discussion during the class, which made the class more productive. Second, I felt the attitude of faculty is kind of different. I mean, Yale faculty was eager to teach us and I could feel it. Though this program was summer session and I don’t know if this holds true during the year. Third, the style of learning was different. In Japan students usually don’t study very hard, and start studying seriously when the final exam is coming. On the other hand, in Yale, students are supposed to study constantly (e.g. homework for each class and weekly test.)
LIFE 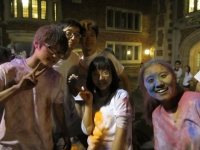 In the first two weeks I suffered with English; honestly this was unexpected. Native speakers talked much faster than I expected and I could not keep up with the chat among them. Since this program was not an English course, most students (well, other than Chinese students) were native speakers. But I gradually got used to it and managed to deepen the friendships with other students and enjoyed the latter part of this program so much.
Many weekend activities were offered by Yale: trip to NY, trip to the beach, laser tag and so on. I was busy enough with studying, but I believed one of the most important things I could gain in this program was friends, so I joined these every weekend in exchange for deprived sleep. For example, almost every Friday night a festival was held. On the first Friday we enjoyed chatting and dancing in front of bands. I was surprised that apparently American students were really well used to dancing. It was like I was watching a film. In another festival, which was called HOLI Festival, we threw paint powder at each other. It was totally crazy, fun and awesome!
CONCLUDING REMARKS
In this program I learned four things: (1) now I know based on my own experience that by doing my best both in studying and playing, I can be fresh and the outcome from both are maximized (2) active attitude toward the lecture improves the whole course (3) I think I could enough absorb the content of courses themselves. They were intellectually interesting (4) I managed to find out at least some of the effective way to make friends with international people in the cultural differences. And as a consequence, (5) I could make friends with many interesting students.
This program is not just a pleasant and joyful journey. At first you may lose your confidence. You may be depressed. However, the fruits you can gain from this program would be priceless and would eventually change your following life in a good way. In this sense, the earlier you have this experience, the more fruitful it would be. I strongly recommend this program to anyone, whether you are planning to study abroad in the future or not.
Facebook0
Twitter0
Google+0
LinkedIn0
Pinterest0
FUTI 奨学金