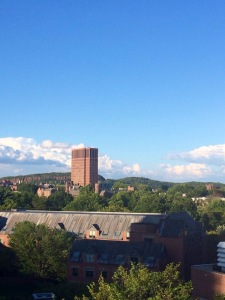 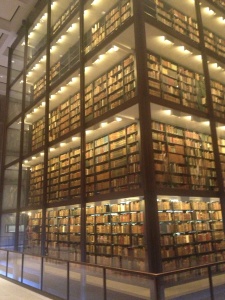 The library that preserves the most valuable and unique version of books. The whole cage is like a refrigerator to keep the books from damage.

This summer I have attended Yale Summer Session B, and spent one month at Yale. The first day I arrived at Yale, I was deeply attracted to its classical, modest and western architecture and also the whole academic atmosphere. Yale has successfully created an environment for students to study literally everywhere. There are chairs on the grass, and comfortable couches put in common rooms. Study is not restricted to libraries and classrooms, and is not a behavior that could only be conducted on standard desks and chairs. Even in the library, there are many comfortable sofas for you to lie on while reading your books. On the grass, I could always see people reading, chatting or working on their laptops under the sunlight. I just love this peaceful and relaxing atmosphere.
I have taken 2 courses at Yale. One is “Film, Video and American History” and another is “The Introduction of Philosophy”. I have enjoyed both of them. Because film study of Yale is quite well-known and highly evaluated, the former course is more like teaching us how to appreciate films and how to analyze their difference and historical backgrounds. We were required to do a lot of readings as preparation before every class, such as readings about historical backgrounds and the reviews of movies so that it would be easier for us to comprehend films, discuss about valuable details and answer instructor’s questions. On average, we watched at least one film and several excerpts of relative films at one class. Because some of them do not have subtitles, so it was a big challenge to my listening. Although I encountered hurdles in understanding movies, it spurs me to spend more time in listening to English materials after coming back to Japan. There were 3 Yale students at the class, who always present their opinions actively and I learned from them not to hesitate to speak out my opinions. By taking this class, I really watched a variety of films of different genres and different historical periods. I used to just watch movies as entertainment, while after this course I formed a habit to observe more details like music, shooting techniques and pay more attention to the individual style of directors. 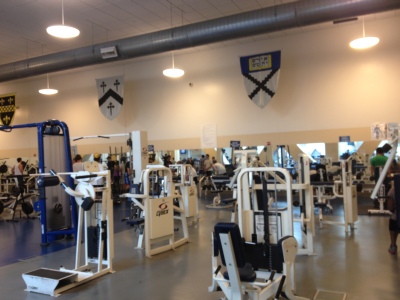 Yale’s gym is so well-equipped and it is said to be the biggest one among American universities. Instructors said that the gym seemed to be always under construction and furnishment. We always went there to work out.

As for another course, “The Introduction of Philosophy”, I think it is not just an introduction of philosophy, but also a lesson to broaden my mind and stimulate my thinking. The course was held in the form of seminar. Students could freely present their arguments on the base of the monumental papers in philosophy. To discuss in the class, it is essential to finish the reading assignments, and I learnt a lot of philosophical opinions. I tried to present my points as fully and clearly as I could in the class and was impressed by the rapid and divergent thinking of American students. Some of them are just high school students, but they work more industriously and are no less inferior to college students. There is one person from Belgium who works as a teacher in primary school and wants to realize his dream of teaching political philosophy in college. I received great help from him and really enjoyed studying with so many awesome people. The instructor encouraged us to talk to him in office hour and I enjoyed talking with him about my ideas that I had failed to express in the class. The 2 courses have trained and help to elevate my English ability and are both interesting and beneficial.
I am impressed by the facilities at Yale. The gym is said to be the greatest one in all the American universities. I tried to utilize it every day. One of my friends has persisted in running on the running machine for 45 minutes every day, which really astonished and inspired me. There are a number of libraries at Yale, so it is convenient to go there for study and search for documents at any time. Besides study, there are many events and activities arranged by the school. The parties and study break provided chances to meet more people and know different cultures. 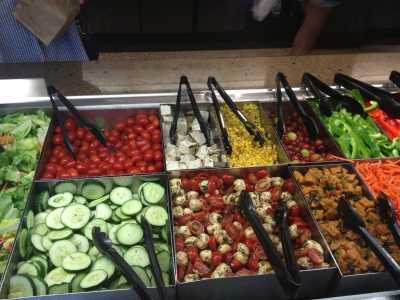 On the weekend, I traveled a lot with my friends and tried to see more aspects of America. I have been to New York, Boston and Amusement Park etc. Although I just stayed 2 days at New York, I think this whole city is a perfect example of the mixture and combination of different elements. The chaotic Time Square, messy subway, relaxing central park, bustling Wall Street and tranquil museums etc. all the elements aggregate in New York and foster it to be one of the most significant cities in the world. I hope I could have more time to explore this city. 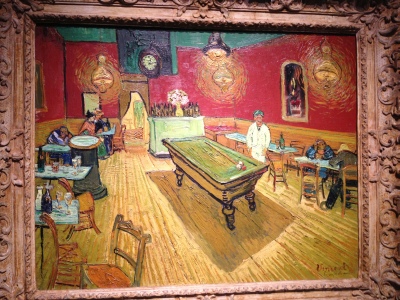 It is a real painting of Vincent van Gogh, which is preserved in the art gallery of Yale.

All the experiences gained in this program and the whole process are unforgettable. People around me have taught me so much, both students and instructors. My original intention of attending this program is to get inspired and I think I gained more than I expected. I sincerely appreciate Friends of UTokyo to offer me the scholarship and I hope more people could benefit from this meaningful and valuable scholarship to gain memorable experiences and become more global.
Facebook6
Twitter0
Google+0
LinkedIn0
Pinterest0
FUTI 奨学金