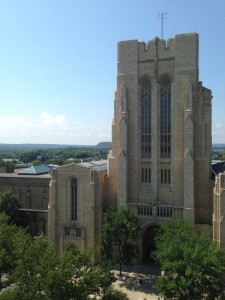 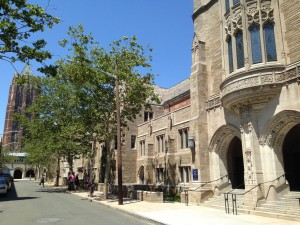 First of all, I would like to thank FUTI for supporting my summer studies in Yale. This scholarship made it possible for me to apply for the program, which was one of the best experiences in my life.
It was a very hot day when I arrived in New Haven, Connecticut, the city where Yale University is located. However, I decided to walk from the New Haven Union Station to the residential college I would be staying in for the next five weeks. To be honest, the city of New Haven itself was not so pretty, but when I started to see the white, Gothic style architectures of Yale University, I was at a loss for words; they were so beautiful. Unlike universities in Japan, there are no boundaries for the campus; Yale buildings were standing side to side with other buildings. However, as I was walking, I could recognize the scenery around me was changing, and it felt as though I was gradually taken into the world of academic studies. 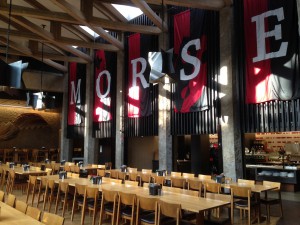 The course I took at Yale Summer Session was called The Moral Foundation of Politics. It covered the realm of political philosophy, especially contemporary philosophers and political thoughts. I had class two days a week, each class was about 3 and a half hours long. First I thought that I would have a lot of free time since I didn’t have any class on the other 5 days. However, I was soon betrayed; our professor gave us loads of reading and writing assignments every week. We had about 100 to 300 pages of readings to prepare for the next week and were required to write a 6 to 8 pages essay each week. The class was much more intense, interactive, and highly leveled than classes in University of Tokyo. We were required to put a lot of effort into class, therefore, I was studying from morning to night nearly every day. 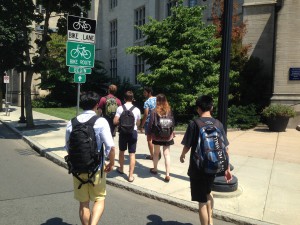 Political philosophy was a completely new subject to me and it was much more complicated and sophisticated than I had thought. I had never even studied philosophy so I was not used to the way of thinking philosophically and structuring my own argument. We started off with the topic of anarchism and state legitimacy, and focused on whether autonomy and authority are compatible. Then we went on to study the conception of justice, equality, liberty and so on, then to political thoughts such as libertarianism, egalitarianism, and utilitarianism, and also the social contract and its relation with sex and race. The class covered many topics and controversies between philosophers in a short span of time. To me it was a very difficult subject to learn, and on top of that, the level of academic English was torturing me. I had to keep on looking up vocabularies in the dictionary at least once every minute when I was working on my reading assignment. The class itself was also hard to keep up with. For the first two weeks, the class was mainly discussion among students and the professor. The professor would give topics for discussion and students would freely state their opinions. I have never experienced this type of class; the topic would move on very quickly nonstop. From the third week of class, the professor broke us up into groups and gave out presentation topics. Each group would select one topic and prepare for a 15~30 minutes presentation using the first hour of class. This group presentation style allowed me to speak out more and it was a very good practice contemplating and explaining using English. 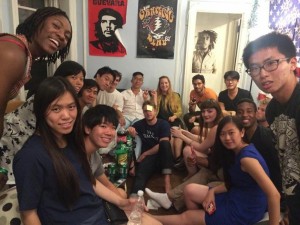 I have to admit that to the very last week of class, I was unable to fully commit to class. The English barrier was higher than I had expected when it comes to discussing high leveled, academic, and abstract topics. However, throughout the course, I was getting used to the speed and I knew my understanding was improving. I also realized that if I speak with confidence and eagerness, people will try to understand me even if I speak slowly. I thought that not saying anything is the worst sin, thereafter I tried to speak out whenever I had something to say, even if it was wrong.
Without saying, the class taught in one of the best universities in the world was very fruitful but life on Yale campus was amazing as well. The facilities were perfect; my residential college had a dining hall that offered three meals a day, a library, a common room that students can relax, a game room called the “buttery”, which also served snacks at low price, and a nice courtyard. Plus there were bigger and comfortable libraries in walking distance, and there was a beautiful gym right in front of my residential college. I used to go there at least once in three days to work out. There were many nice restaurants in town where I went with friends when we were getting tired of the meals in the dining hall. 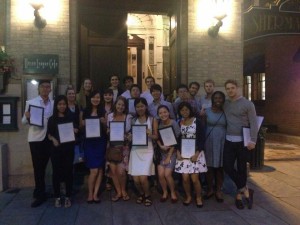 Yale counselors and staffs who are current Yale students organized many activities for summer session students. There were intramural sport activities every night such as futsal, basketball, soccer, and volleyball. There were movie nights and karaoke nights, dance lessons, field trips to nearby beaches, and amusement parks. There were even trips to New York to see Broadway shows and Yankees game; I went to see the Yankees game with my classmates. These trips were heavily subsidized by Yale so we were able to go there at a very reasonable price.
The experience I had in Yale was wonderful. I would never forget the five weeks I spent there. I have to say that the friends I made there are the best part of this program. I met people from all around the world; everyone was so friendly, intelligent, educated, and mature. They were some of the best people I met in my life. They had a great influence on my perspectives on the world, intellectual interest, and my plans for the future.
Last but not least I would like to sincerely appreciate Friends of UTokyo, Inc. once again for supporting my experience in Yale. This summer was one of the most amazing in my life. Thank you so much!