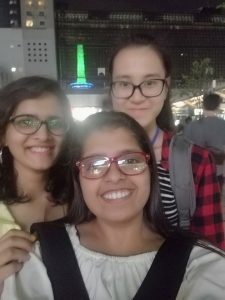 Whenever I reflect on my childhood, I realize how much it was infused with the Japanese culture. I grew up at a time when Sailor Moon’s anime was still running on TV, when Doraemon was still just a few volumes out, and when everyone was still struggling to help Mario rescue his princess. Japan, just like that, has become part of me, of my childhood, of my life, and yet I never had a chance to travel to Japan to actually experience it. Luckily, I found a window of opportunity when I stumbled on Todai’s UTSIP online. However, there was one problem: my limited financial ability. Therefore, I was thankful for FUTI’s scholarship. Without it I would have never been able to realize my dream of visiting Japan. Under professor Honda’s supervision, I conducted research into global game and its application in the real world, specifically, in adoption of farming method in Bangladesh.
Game theory is no unfamiliar term to me as I’ve already had research experience in this field before. Nevertheless, global game is a completely unknown world to me. Originally proposed by Van Damme (1993) and developed further by Morris and Shin (1998), global games have been applied to many realms in the real life, such as currency crises model, bank runs and so forth. The key point of global game is the inclusion of uncertainty, which makes it more realistic than other game models I’ve come to known. 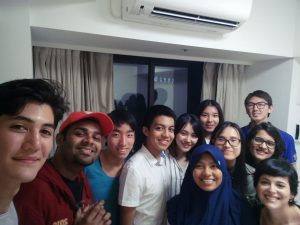 In my project, we try to use global game to explain the mechanism behind the decision making process of farming method adoption in Bangladesh. We aim to explain why some communities preferred risk dominant farming method over payoff dominant one. My role was to build a model that could potentially help to explain this mechanism, then change the assumptions and parameters to make the model more realistic, and finally use computer simulation (Python) to simulate the game and obtain the results of the equilibrium. We adopted the Evolutionary Game Framework, which allows players to “update” their strategies after each round of playing the game.
What’s interesting about the results is that the number of players involved and the number of players per round matters. As the total number of players increases, people are more willing to choose rice. Furthermore, if the number of players one communicates with increases, the risk dominant choice also tends to be more preferable. In reality, both of these are very likely to happen, which would explain why some communities prefer rice (less risky) over shrimp (profitable). 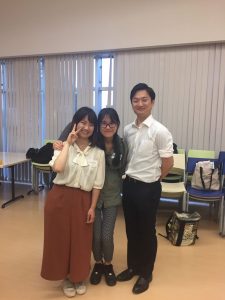 My intellectual experience was great but what was amazing was the cultural experience. I love how even though we were all of different nationalities and had radically contrasting cultural values, we all bonded so well together. I really enjoyed and missed staying up until wee hours of the night, giggling and talking about anything and everything about our countries. We made the most of our trip by traveling to different places around Japan, including Kyoto and Nara. The trip to Kyoto was to me the most memorable, filled with mishaps of inclement weather and misdirection but also with excitement and happiness. All three of us were tired out by the end of the day but still smiling nevertheless.
But what stood out the most was the Japanese’ kindness towards tourists. I was deeply touched by my friend’s tutor’s painstaking effort to create a notebook with detailed notes about Tokyo’s sightseeing attractions. Due to language barrier, we had much difficulty navigating but the Japanese tried their best to help us, even to the extent of dropping everything they were doing to take us all the way to our destination. I will never forget the kindness of a man who without words took me all the way to not just my station but to my train line then walked back to his station because it was already late at night.
In short, UTSIP has been an unforgettable experience for me and hopefully one day not too far away, I’ll be able to return to Japan.