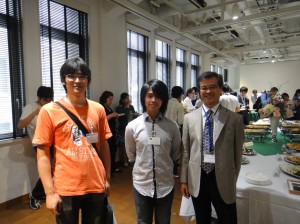 This is a tale about a young man, Elton Ho, whom I occasionally refer to as “me”, and his intellectual and cultural journeys with Aihara lab in the University of Tokyo. This is a quest in which this young man explores the frontiers of high energy physics through constant failure and repeated frustration. Had he no fear nor worries for that companions from the Aihara lab would never abandon him. This is an adventure to realms unknown to the young man with side stories leading to the making of life-long friendships and broadening of horizons. This is a story to be brought known to men, and, therefore, I shall be your guide, and let us step into this little venture with our protagonist.
In fact, my experience during UTRIP was nothing less magical or fantastic as that sounds. 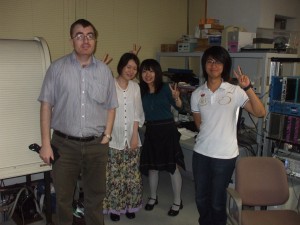 Working under the supervision of Prof. Aihara, the dean of the Graduate School of Science, I participated in the Belle II project over the duration of six weeks. Belle II is a high energy physics project located at KEK High Energy Accelerator Research Center. Here we aim to answer a very simple yet profound question: why do we exist in the form of matter as we are right now? Physicists theorized that something called CP violation might be the key to it. This is exactly what the Belle II detector is trying to measure through means of using exotic particles called B mesons. The SuperKEKB particle accelerator, with a diameter of one kilometer, at KEK will generate these little particles. Particles produced through natural processes from B mesons are to be detected by our Belle II detector, which is under development. This project is an upgrade from the previous extremely successful experiment, Belle, the results of which contributed to the Nobel prizes won by Prof. Kobayashi and Prof. Maskawa in 2008. In order to explore new physics the new detector has to operate at a lower noise level than Belle, while handling the increased background events from the new SuperKEKB accelerator. This leads to a strict requirement to electronic noises in different detector components. The electromagnetic calorimeter, of which Aihara lab is responsible, being part of the detector, is no exception. A new design was made – pure cesium iodide (CsI) crystals will be attached to silicon avalanche diodes (APD), which will be connected to an electronics chain to detect electromagnetic particles passing through the detector. My work was to test for the noise characteristics of this full detector chain, and determine if it fulfills the harsh noise restrictions. We used various methods, including noise characteristics analysis, and direct measurements using radioactive sources and cosmic rays. We discovered that the current electronics have at least a noise value five times the required. As much as this sounds like bad news, we could now suggest possible methods in improving the design. At the beginning I thought that six weeks would not be enough to accomplish much, but it turned out that my work became valuable information for the Belle II project. On the other hand, I have benefited much through utilizing different experimental techniques, and the knowledge I learned is helping me out in my research at my home institute. Nothing feels better than being able to gain from and contribute to science at the same time. 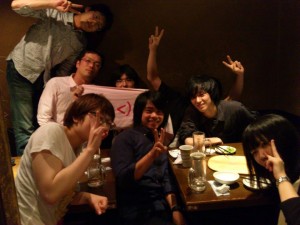 Japan did not fail to give me new perspectives towards physics, academics, and life. One of the goals I made before arriving was to determine if Japan, UTokyo in particular, would be an ideal place for me to pursue a research career. My experience during UTRIP has responded to me well and positively with some unexpectedly nice touches.
The first day I went into the lab I already sensed a unique atmosphere. This is when and where research, language and cultural exchange started. The first three weeks I was working with two other fourth-year UTokyo students, and after that I did further research investigations on my own under the guidance of a research associate of the lab. As I was acquiring the skills and knowledge to complete my studies, I also learned the differences between US and Japanese education and culture. I was invited to various group meetings, seminars, and also international collaboration meetings. Physics discussed not only included Belle II, but also included some current- and next-generation Japan-based projects, such as Hyper-Kamiokande and KamLAND-Zen. All of the activities were very impressive despite me having a language barrier. Exciting physics and technologies were introduced, and a reassuringly vibrant academic environment was presented in front of me. The six weeks have shown that doing high energy physics at UTokyo is undoubtedly very promising.
Aside from research, cultural and bonding experiences had been life-changing to me. I could not show how much I appreciated activities organized by UTRIP and my lab.  We met local and international students through various organized parties. We were taken onto an excursion to Mt. Fuji, and also introduced to traditional paper-making. Local students showed us Japanese traditional activities. Apart from that, my lab friends were also very active in interacting with me. Everyday lunches with Japanese physics students, weekly post-seminar activities with Prof. Yokoyama and students from Aihara lab, late-night ramen-indulgence with master’s students – everything every day gave me new perspectives and excitement. I improved my Japanese language skills, bettered my understanding in Japanese culture, and even felt a level of assimilation to the Japanese society. It was only a couple weeks, yet naturally Japan felt like home and a place to return.
Same as for how every other story ends: the end is just the beginning of another journey. My research trip at UTRIP has ended, but it had an open tail to it. There is very possibly going to be a sequel. It will be a sequel that this young man returns. He will return for more science, culture, and friendship (and food). He will reunite with the full cast from the original while bringing in new characters. He will be telling a brand new tale, one that began thanks to UTRIP.
[Big thanks to UTRIP, FUTI, Prof. Aihara and his lab, and everyone I met in Japan for making everything possible. Without them I would not be here sharing such wonderful experience.]
Facebook0
Twitter0
Google+0
LinkedIn0
Pinterest0
FUTI 奨学金