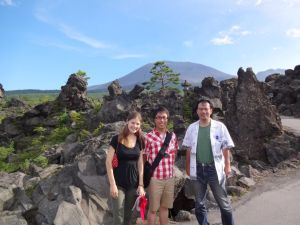 This past summer, I had the great fortune to spend six weeks in the laboratory of Professor Takeaki Ozawa as part of the University of Tokyo Research Internship Program. I arrived at an auspicious point in the group’s research trajectory, and was given the opportunity to participate in its first three-color fluorescence imaging experiment. The skills I acquired and the confidence I gained while in the Ozawa Lab far surpassed anything I had hoped to derive from the experience, and I am deeply indebted to Friends of UTokyo, Inc. for making this remarkable trip possible. 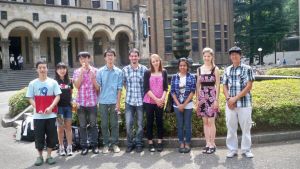 In front of the main library at Tokyo University

Since the discovery of GFP, fluorescent proteins have revolutionized the field of molecular imaging, allowing researchers to tag specific molecules with glowing reporters and thereby track their progress through living cells.  The study of subcellular components has also benefited greatly from the advent of super-resolution microscopy, which exploits the blinking and photobleaching of single molecules to circumvent the diffraction limit of visible light. By combining fluorescent reporting with super-resolution microscopy, we have at our disposal a powerful methodology for probing subcellular processes. 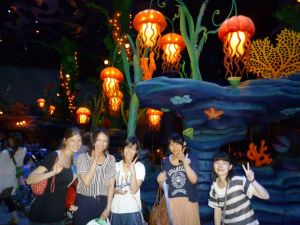 The phenomenon of immediate interest to the Ozawa Lab is clathrin-mediated endocytosis, during which the plasma membrane engulfs extracellular particles and pinches off to form a vesicle. A number of proteins are implicated in this process: most notably clathrin itself, which assembles on the cytosolic surface of the cell during vesicle formation; but also transferrin receptor, a transmembrane protein that binds selectively to iron-bearing transferrin; and dynamin, a GTPase thought to mediate vesicle scission by mechanical twisting. In order to more precisely characterize the interactions between these three proteins, the Ozawa group sought to tag each target molecule with a fluorescent reporter and quantify colocalization via super-resolution microscopy. 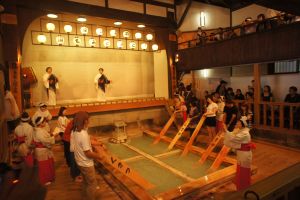 During my six-week stay, I assisted in the preparation of three fluorescent systems: clathrin-light-chain cloned to photo-activatable mCherry; transferrin receptor cloned to EYFP; and dynamin linked to AlexaFluor 647 via antibody conjugation. The two plasmids were co-expressed in monkey fibroblast cells, followed by immunostaining with the antibody construct. We first used confocal microscopy to validate the expression of the target proteins and their associated fluorophores. We then observed the samples on a total internal reflection microscope at a sampling rate of about 30 microseconds per frame. Once data had been acquired, images were processed using ImageJ software with the Octane plugin. PALM analysis was performed, after which clustering and colocalization were qualitatively verified. 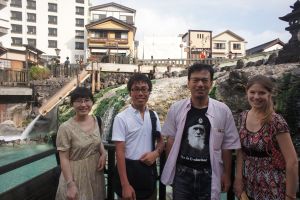 In order to subject our data to more rigorous, quantitative treatment, I proceeded to implement Ripley’s K function and a standard pair-correlation algorithm in MATLAB. These cluster analysis techniques confirmed that localization had indeed occurred. Throughout the coming months, I plan to improve upon this software, rendering the code more robust, versatile, and conducive to the Ozawa lab’s specific requirements. 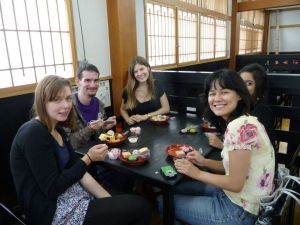 Enjoying dessert with colleagues. Fellow UTRIP participant, Gulnara Fayzulina is to the right.

Although research was undoubtedly the highlight of my six weeks in Tokyo, my adventures were by no means confined to the sample prep room or the microscopy lab.  FUTI’s generosity also afforded me the opportunity to immerse myself in a culture that had been hitherto unknown to me. I cleansed my hands at a chouzuya in front of Nikko’s Toshogu Shrine; I studied Japanese beside Shinobazu Pond in Ueno Park, lulled by the distant chiming of furins; I bathed in a steaming onsen at Hakone; I browsed for books in Jimbocho, cameras in Akihabara, and teapots in Kappabashi; I marveled at the yumomi water-mixing ritual in Kusatsu; I discovered the gastronomical delights that are sashimi, tempura, and zaru soba; I tried my hand at the shakuhachi (and decided I should probably just stick to stringed instruments after all); I overnighted in a capsule hotel, a ryokan, and a mangakissa; I braved the Tower of Terror at Disney Sea and the Tokyo metro at rush hour (I’m still not sure which required more guts); and all in all, I had the time of my life. 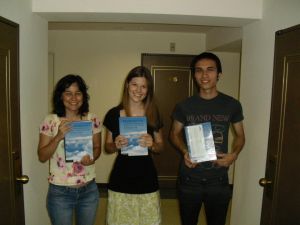 I am not being hyperbolic when I say that my experience in the Ozawa Lab was utterly life changing. I had been entertaining grave doubts about my desire to pursue a scientific career, but my UTRIP experience inspired, galvanized, and empowered me in a way that none of my previous research experiences had before. I am indescribably grateful to Friends of UTokyo, Inc. for financing this invaluable opportunity. My post-graduate plans are still uncertain, but I have no doubt that Japan, the University of Tokyo, and quite possibly the Ozawa Lab will figure prominently in my future endeavors.
Facebook0
Twitter0
Google+0
LinkedIn0
Pinterest0
FUTI 奨学金