UTRIP: A Summer in Eight Episodes 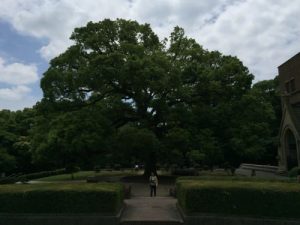 The big problem is of course that I cannot, in the space I have here, get across what the University of Tokyo Research Internship Program (UTRIP) really was—that is, I can’t give every little fact or experience of the thing, and I definitely cannot do this as well as the heavy lifting to interpret and fit the little included anecdotes into some sort of Bigger Picture without (1) going on forever, or (2) reverting to saying things that are just misleading. I experienced UTRIP in episodes, moods, and times of day, not in philosophy or long-form essay. And I think this format does best. 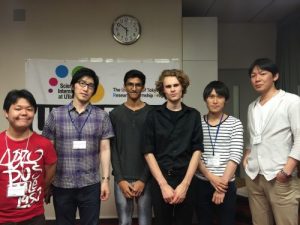 The first person I met from the program was a university student—a physicist named Asmae, who I saw, coming in off a silent, unmarked street, as we were both severely jetlagged, mutually figuring out how the front door of our apartment building worked. This was a Tokyo night—dead summer—meaning I was sweating, and maybe only said two words to her as we finally fumbled over the key thing and then said goodnight. Her accent was slightly French. The streets were immaculate. Three vending machines graced the 200 meters from the beautiful massive twisting highway overpass to our apartment: the pervading feeling of all of this being that these are places I would otherwise never have seen—people I would never have met. 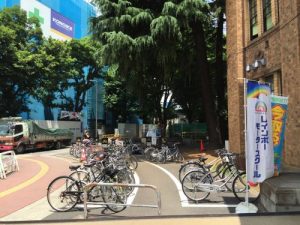 The first true day, after a quick tour of the University of Tokyo campus, a selection of snacks, and small speeches from the sometimes understated, driven administration of the Graduate School for Science, I went, along with Gautam, a soft-spoken physics undergraduate from India, upstairs. The director of our lab, Professor Katsura, sat us around a small table with blond veneer and began to write on the whiteboard, stopping occasionally to ask us if we had learned a concept before, and if we had found it interesting. It was casual. Professor Katsura, his lab’s graduate students, the varied snacks they always had hidden somewhere—it was almost spookily endearing. That day, even in the depths of jetlag, literally bleary-eyed, we worked smoothly, as peers, excited by one thing: to settle on a topic for research (correlated, many body quantum systems and their symmetries): papers to read (Nayak, Vidal, Shor, Wiegmann, et al), math to fiddle with (abstract algebra and representation theory), all under the good afternoon sun and the hum of the air conditioner. It felt sustainable. Many days would be like this. 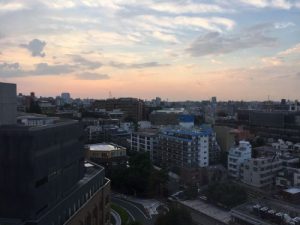 View from our lab window

The afternoons spent poring over papers on many-body-localization (the idea that impurities in a regular atomic lattice can allow interesting, strictly regional effects) or spontaneous symmetry breaking (where certain patterns expected for system are not observed in the true physical system) were quiet, yes, but lacked the sort of untouchable cleanliness of the mornings. One day during the first week, Gautam and I came to the lab early to find that it was vacant and locked—we had forgotten to ask for personal keys. While waiting, the director of the adjacent lab invited us inside, and poured us each a glass of water into small, light blue plastic cups. She spoke briefly with a student in Japanese about why we, two wide-eyed’s, were sitting there, before going back to her desk. In the mornings the light was paler, and all of the computers in the woman’s lab were beige. Then, just the sound of keyboard tapping and the taste of mineral water and thinking about all the new papers to read. I remember a tall crane outside of the window (we were on the ninth floor) building something massive. 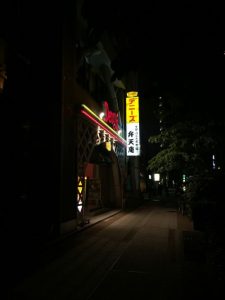 At nights, after riding the subway back (first the Marunouchi Line, transfer at Otemachi, then the Hanzomon Line), I would return to my apartment (if I did not zip off somewhere else to walk or see or eat), maybe cook dinner, wash some of the dishes in my sink, and then do work at my desk, opening up the curtain and staring for a while at the small Italian restaurant across the street, festooned in orangey string-lights, as well as blue ones that looked like icicles. As the simulations (at this time I was programming a routine to capture the dynamics of a many-particle coupled system with spontaneous time translation symmetry breaking (TTSB)) ran, often for long times, I would watch from my second story window, until the restaurant eventually closed—dark bottles of wine in a line at the bottom of its windows. The notebook on my desk would be filled with new math. Tea would steam on my desk. Or it was a bottle of soda from the fluorescent 7-11 down the road. I would go out to walk at 1 or 2am. Sometimes I would write—not about physics, or math, but fiction (something else I enjoy)—and it would clear my head. 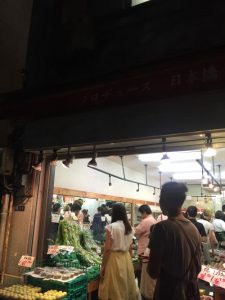 Almost every day for lunch, our entire lab would go to one of the university cafeterias, and discuss whatever came to mind. Gautam would almost always get the curry rice, and I would almost always get the newest style of donburi offered. The cafeteria was lush with noise. I would try to practice my Japanese, asking on one occasion the word for ‘slippery’ (滑り易い) as I struggled to grasp a reluctant noodle. 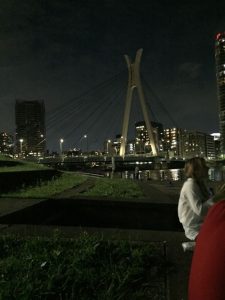 The early afternoon milieu was between Gautam, myself, Professor Katsura, and our supporter, a graduate student named Shota Tamura. We would sit once or twice per day and share what we had found confusing, intriguing, or promising. I remember many days where we would each of us correct the idea of another, only to have our correction expanded or improved upon by yet someone else. Our lab had just begun to study many body localized systems with respect to TTSB, and so, in a sense, despite our difference in age and academic patina, the language of the field was fresh and volatile to each of us. Professor Katsura would guide and elucidate with a few choice words, and we would clarify and rephrase it as best we could, adding enough so that the idea could then fall back to him. 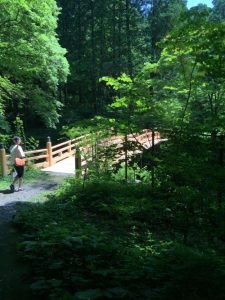 Late afternoon to evening meant focused work, and determining those problems that might be best solved at night, when thinking seems to become most desperate and creative. For two weeks Gautam and I programmed an algorithm that would allow a system of particles to be simulated with less memory usage and in faster time than the conventional approach. Although we did not design the algorithm’s basic techniques (clever to the extreme), its implementation and application to our system in particular brought about a mess of data structures and finicky convergence. Our two programs, written in different languages, would glow on our two computer screens as we compared their occult outputs and corrected small errors as we found them. There were always more errors. This ended in a night of extreme frustration, whereby we found again and again that a condition we thought should be analytically necessary was not being satisfied in our code. After exhaustive and sometimes melodramatic searching, we found that our mathematics had been wrong (the objects of study, high-rank tensors, could be partially traced in many ways, only some of them physically meaningful, and we had neglected to check the physicality of our math—a wise warning), and that the code, written days before, had been correct to begin with. The program exploited the fact that correlation, or information shared between disparate parts of the system, was relatively slow moving and limited in amount—it was not lost on us the humor that in exploiting this simplification we ran into so much difficulty. 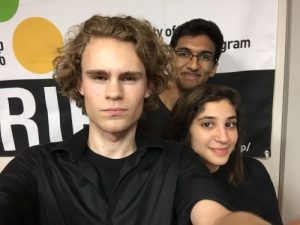 I remember distinctly from the day of our final presentations—sitting next to Gautam and Asmae, who by this time had become my good friends, opponents in argument, and partners in reading—the mood of the space. Some people were rehearsing what they were to say in their heads, others were adding last-minute addenda, but everyone at once was recognizing the time as a last hurtle, with the end of the program hot on its tails. A representative from FUTI (Matsushita-san) even, was there, and congratulated me, when I had presented and fielded a few good questions, during the post-presentation haze—he was wearing a bolo tie and sported one of the best handshakes I had ever received. And then it was over. 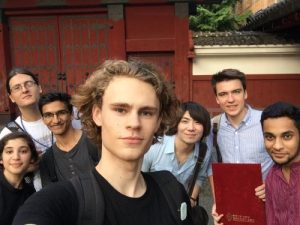 UTRIP interns in front of the Akamon

I promised I wasn’t going to ruin this report by trying to say what UTRIP truly was or meant. As far as I can tell, it was just a mode of living for six weeks. A mix of temperatures. Conversations with people I could otherwise never have spoken to. This is the method for progress, I think—even though people say it all the time—that is, solving problems is about emotional and perceptual extremity: trespassing into a place no-one’s ever been, and making it out alive. It doesn’t happen in a calm mind that’s thought one way or one color forever, no matter how hard. UTRIP, thanks to FUTI, and the countless other people who made my life easier and the program richer—who helped change that most intimate thing (i.e. how to think)—displaced me into that über-world where everything is at once more strange and on the verge of perfect. Like the sky before a storm you know is just going to let you have it. It feels rare. And I hope I can continue to remember these moments, to talk to those people I would never otherwise have met and known, and return to UTRIP through them, fragmented and mysterious as that sounds.
Facebook0
Twitter0
Google+0
LinkedIn0
Pinterest0
FUTI 奨学金