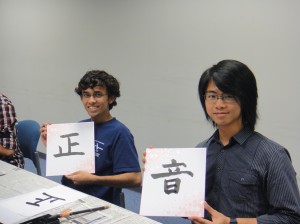 This summer I had the good fortune of spending six weeks in Japan as a UTRIP fellow. In the days leading up to UTRIP, I had read in detail about the science at UTokyo, and had grown slowly more excited about the prospect of being part of the physics community at a prestigious foreign university such as UTokyo. I had signed up for Prof. Miyashita’s group in the Department of Physics. The group consisted of condensed matter theorists who were working on various problems in quantum dynamics, which is an area of physics that is, broadly, the study of time-varying quantum phenomena. Prof. Miyashita gave me a lot of freedom in choosing my topic, which was a bit unsettling at first since I had little research experience in quantum dynamics. However, after two busy weeks of reading papers, attending seminars (which were all delivered in English) and talking to my lab members about their work, I found an interesting problem to work on. The problem, which was on phase transitions in an atomic ensemble in a damped, driven optical cavity, was especially interesting to me since it had some connection with quantum computation research that I had done the past summer. 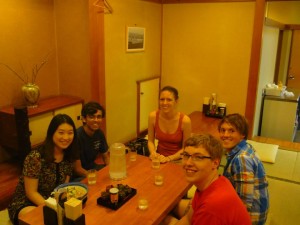 Research, however, was only part of the whole Japan experience. I soon realized that the other UTRIP students were really interesting people and fun to be around. We quickly bonded over our love for science and being together in a new country brought us even closer. While we each had our independent schedules on any given weekday, we would often get together for dinner and try new places near UTokyo. Our little evening expeditions gave us a good sampling of Japan’s diverse and delicious cuisine. Udon noodles (with Tempura perhaps), ramen, Okonomiyaki, Sashimi — we had all this and more.
Towards the end of every week, we would excitedly plan our Saturday and Sunday adventures; visiting the Ueno Park and the National Museum, shopping in Shibuya, taking an excursion down to Odaiba, roaming the arcades and manga bookstores in Akiba, or waking up early to get in line for the fish in Tsukiji — these were just some of our fun weekend trips. 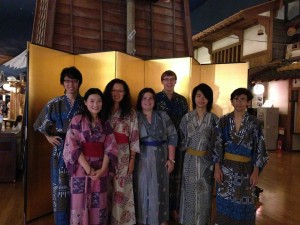 UTokyo, and the staff of UTRIP in particular, was very warm and welcoming to us international students. UTRIP organized events that facilitated our interaction with students and professors of the UTokyo community. We had multiple meet-and-greet events to which our lab members were invited, and I interacted with many masters and doctorate students, some of whom were non-Japanese. My mentor, Prof. Miyashita, encouraged me to attend his reading class, where I became good friends with the two Japanese Physics students. These interactions gave me a good sense of the student life at UTokyo and I started thinking seriously about coming back to UTokyo as a student.
Along with these informal interactions, UTRIP also organized a two-week long seminar series, in which professors from all over the UTokyo science division talked to us about their exciting research: Tsunami simulations, discovering new algae, String theory, so on.
Lastly, UTRIP also gave us the chance to enroll in a short Japanese course, organized two culture seminars on Japanese calligraphy and formal tea ceremony, and also took us on a field trip in the Yamanashi prefecture, where we got many breathtaking views of Mt. Fuji. Thus, UTRIP facilitated the exchange of science, culture, ideas and values between us, the international students, and the Japanese people. It truly was an extraordinary 6 weeks.
Japan left a deep impression on me, and not just because of the wonderful experiences I had there. I fell in love with the Japanese culture, the traditions and thinking of the people, and most of all, the Japanese language. I have decided to study Japanese further, and hope that I can go back to Japan someday, and this time, not leave so soon.
Facebook0
Twitter0
Google+0
LinkedIn0
Pinterest0
FUTI 奨学金