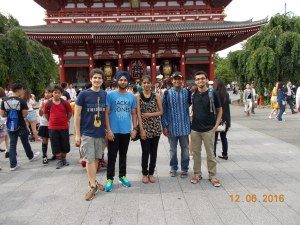 Visit to the Senso-ji temple

Two have been the major goals I have pursued in my life so far: increase my knowledge and involvement in the fields of physics and physical research, and broaden my outlook on the world by getting to know different cultures and experiencing life in different parts of the world. My participation in the UTRIP 2016 program, which was made possible through the generosity of Friends of UTokyo, Inc., enabled me to live a marvelous experience that perfectly harmonized these two seemingly different objectives. 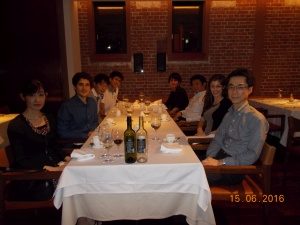 Working for a summer at the University of Tokyo was surely an amazing opportunity from the academic point of view. I was welcomed in the Hiro Sakai Group in the Department of Physics of the Graduate School of Science, and I mostly worked closely with doctoral student Md. Maruf Hossain, assistant professor Dr. Shinichirou Minemoto, professor Dr. Hirofumi Sakai and fellow UTRIP student Holly Herbert from Trinity College Dublin. The group is involved with fundamental research in the field of atomic, molecular and optical (AMO) physics, with an emphasis on the study of the interactions between light and matter. In particular, our work focused on the alignment and orientation of molecules through intense non-resonant laser fields and, together with visiting research scientist Dr. Hiroki Mashiko, on the exploitation of High-Order Harmonic Generation (HHG) for the creation of single attosecond pulses. Both projects constitute leading edges of research in AMO physics, and therefore working on them was an incredible opportunity I had to get exposure to novel research, acquire skills with complex experimental setups and increase my knowledge in such an interesting and fundamental topic. 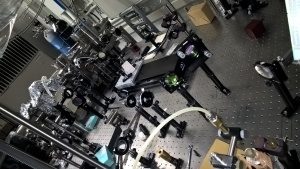 With respect to molecular alignment and orientation, the group recently reported both the attainment of all-optical molecular orientation and the achievement of laser-field-free three-dimensional molecular orientation. For the first goal, a two-color pump beam was employed to fully control the azimuthal angular distribution of molecules, while for the second achievement a static field and a laser field with slow turn on and fast turn off times were combined to achieve orientation without the presence of a pump beam. Our work was involved with the combination of these approaches aimed towards the attainment of completely-field-free all-optical molecular orientation. We constructed and optimized the optical path needed for the two-color beams and an additional probe pulse, and controlled whether alignment and orientation were achieved. An ethylene-glycol sheet was added to the setup to function as a plasma shutter for a rapid turnoff of the laser beams. The experiment was successful, as molecular alignment was clearly obtained and signs of orientation may have been observed, although the group did not manage to operate the plasma shutter during the UTRIP period. The relevance of this project lies mainly in its potential to widen our knowledge in the field of stereodynamics, where the attainment of field free molecular orientation could open new frontiers for the study of how the spatial arrangement of molecules or electrons affects chemical reactions and physical processes. 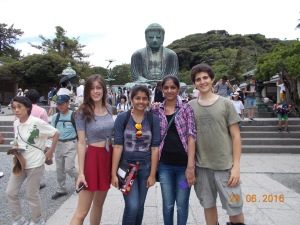 For the generation of single attosecond pulses, during the UTRIP project we used the procedure of Double Optical Gating (DOG), exploiting a two-color laser field and the ellipticity dependence of HHG through the employment of two counter rotating circularly polarized pump beams, to produce single radiation pulses with the required short duration. The achievement of this goal makes it possible to probe ultrafast processes and study electrons stereodynamics, observe the behavior of electrons within circuits’ electronic components or biological processes such as photosynthesis, or detect the movement of electrons during the aforementioned processes of alignment and orientation. The generation of attosecond pulses may also be linked to the aforementioned goal of field-free orientation through the employment of oriented molecules as wave plates to change the polarization of attosecond pulses, for which common optical elements cannot be used. This would serve as an ideal meeting point of the two projects I worked on during UTRIP. 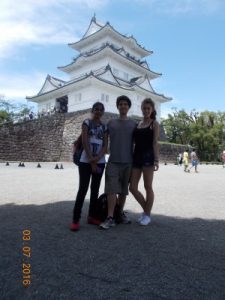 Visit to the Odawara Castle

My involvement with the Hiro Sakai Group allowed me to grow incredibly as a physicist, both from the experimental and the theoretical points of view. On a first level, I was able to work directly and both independently and as part of a team at the development of an elaborate optical setup and at the execution and data analysis of an extremely complex experiment. Many were the variables to consider and several the parameters to optimize, as the highly unstable three-dimensional overlap of the foci of the three beams involved. Moreover, the study of the fundamental principles behind the experiment exposed me to topics in quantum or optical physics that were beyond the level of the coursework I had undertaken until that time, and gave me considerable new insights into extremely interesting areas of physics. I am therefore grateful to everybody in the Sakai Group for welcoming Holly and me, and for guiding us through the whole UTRIP project. 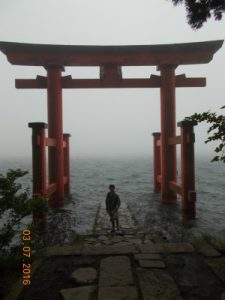 At the same time, the UTRIP program turned out to be not only an academic experience, but also a personal one. In fact, as I stepped out of my plane at the Narita airport, I entered for the first time not only Japan, but the entire Asian continent. I was therefore able to encounter directly and start to know for the first time a thriving, unique and interesting culture. Through my morning runs in the neighborhood of Yanaka, close to our accommodation, I managed to get a peek on the daily life of the inhabitants of the busy city of Tokyo. By working together with local students, researchers and professors, I experienced the way academic life is conducted in the country. Moreover, during weekend daytrips to nearby locations as Kamakura, Nikko or Hakone, I enjoyed some of the country’s natural beauties and learnt more about its cultural and religious norms and practices, as the inspiring outlook on spirituality and the way Buddhism and Shinto have been harmonized in people’s lives. From this point of view, I will never forget when, during my visit to Hakone, fog came down on Lake Ashi and water started to get rough just as I was approaching the Hakone Jinja shrine, where a function was taking place. The spiritual atmosphere this created in the area was deeply moving, and constituted one of the heights of the experience from the personal perspective. Lastly, I was also extremely thrilled by the possibility I had to get to try more of Japanese cuisine and learn about its variety of flavors and preparations. In particular, the peculiar tastes of mochi and red bean paste will always remain dear and vivid memories! 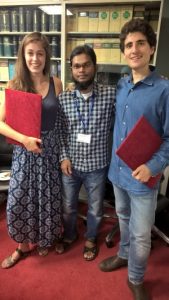 The experience I was able to live through the UTRIP program was therefore extremely interesting and rewarding both inside and outside the laboratory, as well as very intense: how to forget the hard work and long hours spent in the lab aligning and overlapping laser beams, or the walks to the university under the pouring rain? In no other setting I could have taken part in such high-level research at the forefront of physics, acquiring unique and fundamental skills and knowledge, while at the same time making incredible cultural experiences and discoveries. I can only be grateful to everyone who made this experience possible, especially Friends of UTokyo, Inc., without whom all this would have remained only a dream, as well as the Graduate School of Science of the University of Tokyo, obviously without forgetting all the students with whom I shared the UTRIP program. In particular, I would like to thank once more all the members of the Hiro Sakai Group: Md. Maruf Hossain, Wataru Komatsubara, assistant professor Dr. Shinichirou Minemoto, Dr. Hiroki Mashiko and professor Dr. Hirofumi Sakai, who taught me so much by welcoming me in their laboratory, as well as my fellow UTRIP student Holly Herbert, who shared all the lab work (and also great cooking experiences and very fun field-trips) with me.
Facebook0
Twitter0
Google+0
LinkedIn0
Pinterest0
FUTI 奨学金