Unprecedented Growth of Revenues Thanks to Ito Foundation U.S.A. 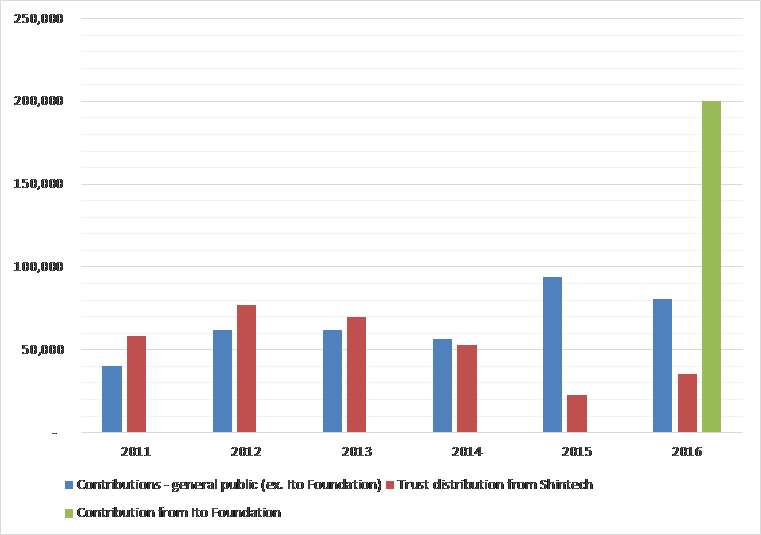 The substantial increase in contribution revenues is attributable to a grant in the amount of $200,000 FUTI received from Ito Foundation U.S.A. The grant was provided to support the “Ito Foundation U.S.A. – FUTI Scholarship,” a new scholarship program launched in FY 2015/16 with the purpose of financially assisting students of UTokyo who will study in the United States.
The next largest contribution was a trust distribution from Shintech, Inc. The amount was at approximately $35,000 as determined upon renewal of the trust agreement in FY 2014/15 for the following five years.
The number of individual donors has increased to 68 in FY 2015/16 from 54 in FY 2014/15, while the amount remained at a level equivalent to that of the previous year, i.e. $80,000. This amount includes a $20,000 donation from Dr. Chou (H. K. Chou Charity Foundation), a major donor in FY 2015/16 who is a well-known figure in the semiconductor industry.
We are sincerely thankful to Ito Foundation U.S.A., Shintech, Inc. and H. K. Chou Charity Foundation for their generous support of FUTI’s mission. Above all, we extend a deeply grateful thank you to the many individual donors who continue to support our activities. As a condition to secure a grant from Ito Foundation U.S.A. in the future, it is required for FUTI to raise sufficient funds from an individual donor base. While we did not reach a target of $100,000 this year, we appreciate each and every person who contributed to FUTI and encourage their continued support of FUTI; without these individual donors, many of our programs including Ito Foundation U.S.A. – FUTI Scholarship would not be possible.
Over the past several years, we have made great strides to nurture our programs. We are pleased to see the growth of our scholarship and research grant programs and the educational endeavors of our scholarship and grant recipients. It will be greatly rewarding for us to see UTokyo increase its presence in the global community, which is becoming more and more competitive with many other well-recognized universities across the globe, including those from advanced countries. FUTI is enormously thankful for your support of FUTI, which enables us to send many highly qualified students into the global community.
Authors: Dr. Yuichiro Kuwama, Vice President and Treasurer and Dr. Fumiko Tamura, Member of the Board