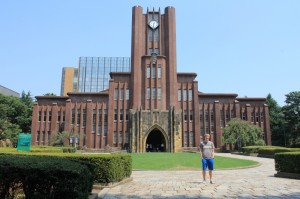 This past summer, I participated in the University of Tokyo Research Internship Program (UTRIP) with funding from Friends of UTokyo, Inc.  UTRIP is a six-­‐week research  experience  that  allowed  me  to  work  on  an  original  project  under  a University of Tokyo professor.
I was hosted by Professor Kazuo Makishima in the “Makishima-­‐Nakazawa Laboratory.”    The  focus  of  this  lab  is  high-­‐energy  astrophysics,  which  includes studies of black holes, galaxy clusters, neutron stars, and supernova remnants.  This subject matter was very attractive to me, since I am currently double majoring in physics and astronomy.  My research background includes work with astrophysical simulations that study dark matter, so I was very excited to work with Professor Makishima on observations of the energetic cosmos. 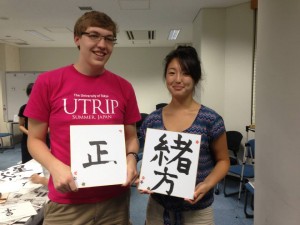 In the first two weeks of the program, all UTRIP students would meet with students from the University of Tokyo to attend scientific lectures given by host professors.  I really enjoyed attending these sessions, since I got the opportunity to hear about the broad range of research topics at UTokyo.  I learned something new from every talk, and I felt that they were worthwhile experiences.  They also gave visiting students like myself a chance to interact with UTokyo students.   We participated in several discussions after the lecture, and I was able to make some new friends. 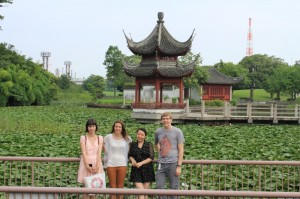 During this initial period, I was also getting acquainted with the members of my laboratory. I was truly humbled by everybody’s kindness and hospitality. They took me out to eat, and I tried sashimi for the first time.  (It was very good!)  A few lab mates quickly became close friends of mine and showed me around Tokyo on the weekends.  The sense of community that I had while working in this environment was unparalleled.  Someone was always willing to give me suggestions or help me with an issue, whether it was related to research or another matter, like acquiring a prepaid cell phone or navigating the metro. 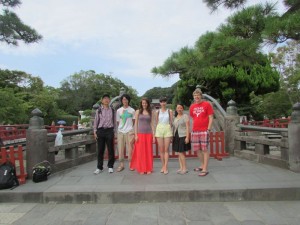 My research project focused on analyzing data from the XMM-­‐Newton satellite.  This satellite is used to view X-­‐rays coming from outer space.  I used it to investigate the properties  of  a  galaxy  cluster  named  Abell  1835. Galaxy  clusters  are  very interesting to study because they are the largest gravitationally bound objects in the universe.   Each one is made up of hundreds to thousands of galaxies plus a large amount of X-­‐ray emitting plasma.  These massive structures are theorized to have a third  component,  dark  matter,  which  cannot  be  observed.  My  main  research objective  was  to  find  the  distribution  of  Abell  1835’s  mass  and  see  if  this distribution revealed anything about dark matter.   To accomplish this, we use the satellite to observe the distribution of hot plasma in the cluster. Then, we can infer the  distribution  of  total  cluster  mass  by  assuming  that  the  plasma’s  pressure balances  with  gravitational  forces.   In  the  end,  we  see  that  in  order  to  support  its plasma, this cluster must have a lot more mass that isn’t contributed by the plasma or the galaxies. This mass must come from dark matter. 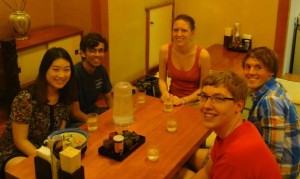 I had never tried a project like this before, and I gained a lot of new skills and knowledge from carrying it out.   The opportunity to conduct this research helped me grow in many ways.  I feel that I have a much better sense of what graduate student life is like.  I am also compelled to apply to UTokyo in the future, since I had such a great experience there.
I’m happy to say that my learning did not stop when I left the university grounds each day. During my entire stay, I tried to gain greater exposure to Japanese culture. UTRIP students were treated to two cultural seminars, with lessons on sumi-­‐e and calligraphy.  We also took a field trip to Yamanashi prefecture, saw Fuji-­‐san, and participated in craft-­‐making sessions. I explored Tokyo as often as possible with lab mates and fellow UTRIP students. This helped to improve my Japanese greatly, even in the short six-­‐week time span.  All of these experiences fostered a deep admiration and respect for the Japanese tradition.
At the end of the program, I found that I had become very close to my fellow interns. Since we were all lodged at the same hotel, we had spent a lot of time together.  We all came from very different backgrounds, and I think we learned a lot from each other. I can say that I gained a new set of very dear friends from UTRIP.
Simply put, this summer was absolutely amazing, and I will never forget it.   I am incredibly grateful to Friends of UTokyo, Inc for everything that they have given me by facilitating my participation in UTRIP.  I am inspired to dream even bigger and accomplish greater things in the future, and it is thanks to you.
Facebook0
Twitter0
Google+0
LinkedIn0
Pinterest0
FUTI 奨学金