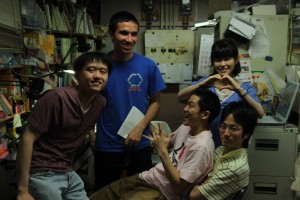 I will never forget the summer 2012 I spent in Japan.  There are no words that can adequately describe what I have learned, the experiences I have had, and most importantly, the people I have met.  It was February of this year when I applied to the University of Tokyo internship program and the FUTI scholarship.  It ended up being the only summer internship program that I applied to.  I was well aware that the chances of getting accepted were extremely slim.  With 315 applicants and only about 20 spots, I was not very confident about getting in and naturally did not expect too much.  However, with that being said, I convinced myself that out of those 315 applicants, I wanted to go to Japan more than the any of the other 314 applicants.  It just was a matter of whether or not I was able to express that sentiment in my application.  There truly was nothing I wanted more at the time than to get accepted.  Part of this indescribable desire to get accepted is attributed to the cancellation of my study abroad program at Waseda University due to the devastating March 2011 earthquake.  I was told to come back by my home university and my 11-month program was cut short to just about 5 and half months.  As a result, I was also forced to withdraw out of the 2011 spring semester at my home university before reenrolling again in the fall.  Not knowing whether I would graduate on time because of my withdrawal was a very unsettling and difficult time for me.  However, thinking that I needed to do my best to move forward, I became determined to turn something bad into something good.  I was more motivated to work harder than I ever had before and I made it a huge goal of mine to be able to return back to Japan someday.  Now as I sit here writing this report, I realize again that with hard work, luck on my side, and the FUTI scholarship, I was able to reach that goal. 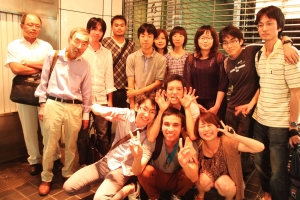 It meant the world to me when I found out that I would spend my 2012 summer with the Tachibana group researching natural product chemistry at the University of Tokyo.  The research focus of the Tachibana group is far different than what I researched back at the University of Illinois, so I was ecstatic at the opportunity of immersing myself into a new field of chemistry.  I became further excited the moment I first met the members of my lab.  Upon the first exchange of greetings, I had no doubt that I would have a very productive and enriching experience.  Furthermore, it was the first time that I could use my knowledge of chemistry and proficiency of Japanese simultaneously.  After getting to know each and everyone of my lab members, I began the research process.  My specific project involved the synthesis and search for potential biosynthetic precursors to 6-membered polycyclic ether rings.  Many important natural products contain polycyclic ether backbones and as a result, the potential for discovering biosynthetic pathways to polycyclic ether rings via enzyme catalysis have long been of interest to biologists and chemists alike.  Though a current group member worked on a similar project, my goal was to expand on this research by synthesizing new precursors, subjecting them to incubation with enzymes from a dinoflagellate known to produce 6-membered polycyclic ether rings, and to ultimately determine whether or not a potential biosynthetic pathway to the desired 6-membered exists.  Though my results suggested no evidence of the desired biosynthetic pathway, extremely interesting results involving the oxidation processes of the synthesized precursors and the dinoflagellate extracts were observed, and as a result, progress has been made towards understanding interactions between the extract and the precursors tested to date.  New questions have also been raised and research in the group will continue in an attempt to find some answers.  Before starting the research process, I was well aware that 6-weeks was hardly enough time to make any significant advances in any field of research, but with some determination and the help of my surrounding lab members, I was not only able to complete my project on time, but also acquired some very interesting results. 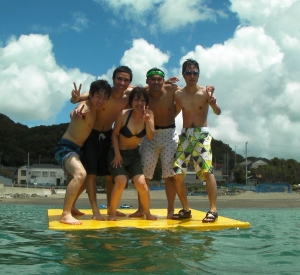 As for what I did with my time outside the lab, the list goes on and on.  From dinners with professors, to sitting in on graduate classes, to late night karaoke outings, to taking hot spring baths, to evening walks in the park, to watching fireworks light up a night sky beyond your wildest imagination, to cheering on Japan in the Olympics, to attending concerts on a sun setting beach, to barbeques by a river, to the tastiest late night dinners I have ever had, to swimming in the Pacific in some of the bluest of waters in Japan, to spending time with my grandma and enjoying her wonderful cooking, I experienced a summer like I never had before.  My time outside the lab still consisted of hanging out with my lab members, and also included spending time with friends from my study abroad experience, and spending time with my grandma.  Thinking back on it, it truly has been a very productive, incredibly fulfilling, tremendously enriching, and indescribably enjoyable summer.  The time I spent in Japan this past summer will remain an unforgettable chapter of my life.  Even though it was only 6-short weeks, I am proud to say that I will forever be a part of the UTokyo family.  My time in Japan this summer reiterated my love for the country, its people, and its culture.  I will do my best to find a way back to Japan again someday.  Thank you, UTRIP and FUTI, for providing me what has truly been an experience of a lifetime.
Facebook0
Twitter0
Google+0
LinkedIn0
Pinterest0
FUTI 奨学金