Lisa Bohn
University of California Berkeley
—
GSP Report
August 28, 2011
In July, I attended a GSP course at University of Tokyo called “Japan in Today’s World”. Before the course began, I was not sure exactly what the lectures would cover but I hoped to better understand Japanese culture and society, and to learn about Japan’s involvement in the international realm. I think the course was a bit too short for my goals to be adequately achieved. The course reshaped my view of Japan, though not in the way I expected. I was expecting that the lectures would be more interrelated, and in general for the course to be more focused. However, the structure of the course did not allow for this, as a different lecturer would talk to the class every day. Still, I this course introduced me to a variety of topics and ways of thinking that I would have otherwise never known about.
In the course, I attended two sessions each day for ten days. Each session was about an hour long. Most of the sessions were lectures. As mentioned before, for each lecture a different speaker would come talk about a specific aspect of Japan. Topics included refugees in Japan, a book club established for survivors of the March 2011 earthquake/tsunami, Confucianism, and many more. Two of the sessions were discussions, where we were encouraged to talk amongst ourselves and ask questions. Topics of the discussions included whether Japan apologized sufficiently to neighboring countries for wartime wrongdoings and why Japanese citizens in Great Britain would complain to the Japanese embassy when they found a British comedy show offensive. One day, instead of two sessions we had a study trip to visit the Sakura House and the Jiyu Gakuen Myonichikan. Every three sessions, we had a two-page report to submit. We could write about anything covered in lecture. I found this very different from papers that I write at my home university, in which I have an argument and must cite where I got my information is from. The assignments seemed too laidback to me. Still, I realize the de-emphasis on writing is a just different way of learning. I am used to writing lots of papers at my home university. In this course there were more discussions, whereas at my home university I never participate in discussions.
What I liked the least about the course was that sometimes I felt that I did not have the proper background knowledge to adequately understand some of the topics the lecturers presented to us. There were acronyms of international organizations I did not know of, words that I did not know the meanings of, and so on. Though I tried my best to understand, I became confused at times and had difficultly following certain lectures. If I had some more background information for these topics, I would have enjoyed and understood those lectures better. I advise students who are interested in this program to take some sort of Japanese social science class before taking the course. Also, I recommend the class to students whose studies are related to Japan, as I think the lectures would make more sense to anyone who has studied Japan. I was able to take a postwar Japan history class before heading to Japan, and I found it immensely helpful in understanding some of the lectures.
The diversity of topics, even the obscure, is what I most enjoyed about this course. I also liked that the class was small. I felt like I really got to know the other students, though the course was only two weeks long. In addition, I liked the highly intellectual discussions we had in the course. I was proud to be a part of a group of such intelligent young people from all over the world.
After taking this program, I see myself coming to Japan again for a longer period of time, perhaps for graduate school or to teach English through the JET Programme. However, next time I hope I am not in Japan during the summer as I found it exhaustingly hot. In addition to returning to Japan, I am now more eager than ever to visit other countries. I speak some Japanese and have visited Japan before because I have relatives there, hence the reason I am studying Japan and always long to return. But now, I feel ready to explore elsewhere, to a country where I don’t speak the language or have any familial ties to. 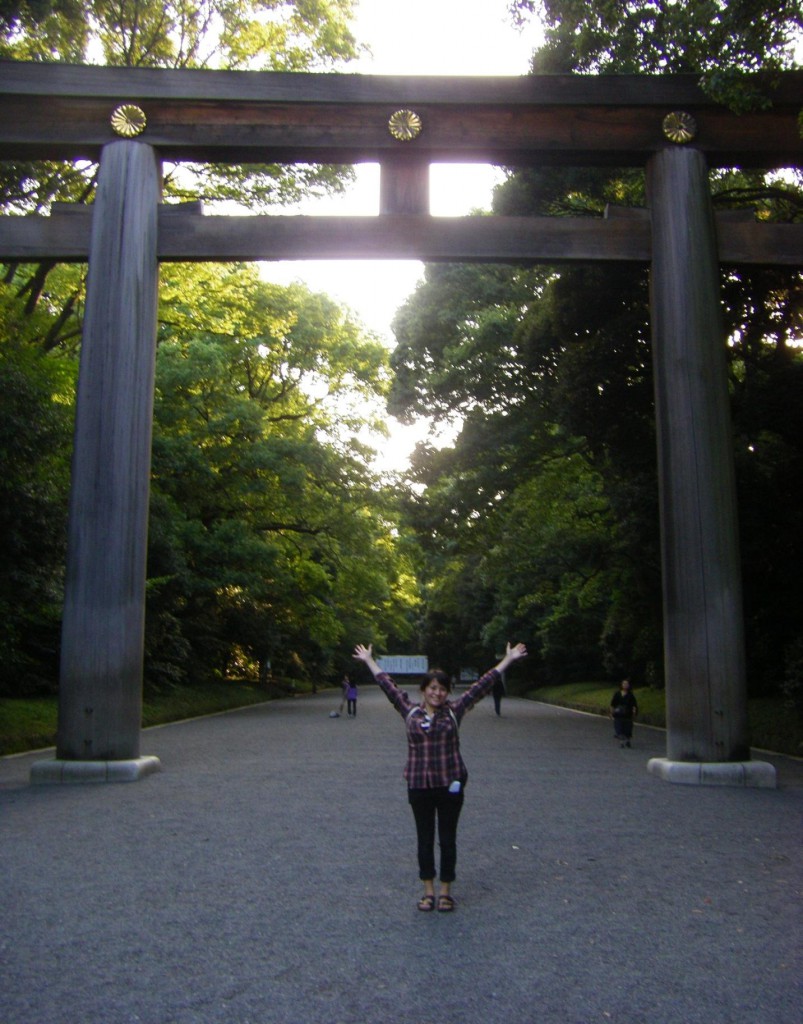 Lisa Bohn at a shrine gate