by Kento Kikuchi
—
From July 23 – August 12, I attended UC Berkeley Summer Sessions 2012. Truth be told, this was not the first time I have been in UC Berkeley. I joined the research project in Nevada in 2011, and went to the campus just as a tourist on the way to the airport. At the time, I could not even imagine that I would go there again as a student in the next year. In this sense, one of my dreams has come true.
The theme of the course was “People of Color, the Radical Left and the Prison-Industrial Complex.” The lecture mainly focused on the understanding of the U.S. historical problems. The government has been faced with a large number of racial, political, and prison-industrial problems. We have discussed those matters again and again, and by doing so gradually deepen our understanding of the complex problems with which the U.S. history has walked and continues to walk. Basically the course was well organized; we had before noon and afternoon classes every week day and everyday assignments. At first, I was surprised at the amount of assignments, yet gradually got used to handling them. History and literature are not my major fields of study, but because the teachers generously helped me when I asked them for some advice, I managed to finish the course. Moreover, to get more advanced knowledge, I worked on extra studies besides assignments. 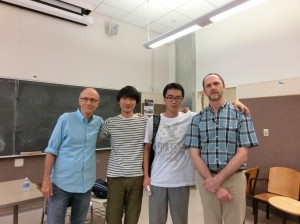 Apart from the class, we have been to Angel Island. The island worked as a detention center where particularly Asian people were detained in the mid-20th century. We learned the unfairness and hardships which detainees had suffered.
During my stay at Berkeley, I talked to brilliant students from all over the world both inside and outside of the campus. Exposure to various ways of thinking was really thrilling and just what I was looking for. Though we had such different ways of thinking and we could not sometimes agree with each other, even these kinds of experience were fulfilling and fruitful. The outcome was beyond what I expected of UC Berkeley.
Last but not least, I would like to thank the Friends of UTokyo for offering me this great opportunity to explore one of the best universities in the U.S. I believe the summer study at UC Berkeley has become the essential step in my university study and surely sharpened my point of view.
Facebook0
Twitter0
Google+0
LinkedIn0
Pinterest0
周顺圭・周滝沢愛子 奨学金