On March 30, 2012, TYI hosted a symposium entitled “Japan and China for Four Decades: Cooperation and Competition since 1972.” This event, planned by Professor Yasuhiro Matsuda as the lead organizer, marked the 40th anniversary of the normalization of diplomatic relations between China and Japan. Prof. Matsuda was a former chair of the TYI program. FUTI supported the meeting through its research grant program. 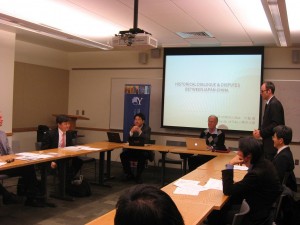 The presenters, in the order of their appearances, were Associate Prof. Shin Kawashima (Graduate School of Arts and Sciences ), Prof. Yasuhiro Matsuda (Institute of Advanced Studies in Asia ) and Prof. Akio Takahara (Graduate Schools for Law and Politics), were all from UTokyo. Prof. Peter Perdue (History Department), Prof. Frances Rosenbluth (Political Science Department), and Associate Prof. Patrick Cohrs (History Department), all of Yale University, served as commentators. Daniel Botsman (History Department, Yale University) was the chair of the symposium. Other Yale professors and students attended it.
The lectures were divided into three sessions. In the first session, Prof. Kawashima gave a presentation entitled, “Historical Dialogue and Dispute in Japan-China Relations.” He focused on various political disputes that arose from the two countries’ differing historical recognitions, and solutions to the disputes, especially history textbook issues and the “Japan-China Joint History Research,” in which he himself partook.
Prof. Matsuda’s presentation in the second session was titled, “Sino-Japan Security Relations: Concerns, Competition, and Communication.” He analyzed China-Japan security issues in the context of the security situation in East Asia. He also traced back the historical development since the 1970s until today on how the two countries have interacted with each other and with what intentions.
Prof. Takahara, a presenter in the third session, discussed “Reflecting on the Past Forty Years of Japan-China Relations: What does it tell us about the future?” He divided the period since 1972, when the normalization of diplomatic relations between the two countries took place, into four ten-year periods, and analyzed for each period such factors as their mutual understanding, national sentiments, economic conditions, domestic politics and international environments that surround the two countries, and traced how these factors have changed during the four decades.
In each session there was an active discussion among the group of participants, which included Chinese students studying at Yale.
Prof. Matsuda discusses the significance of this session as follows: “The meeting provided us with a forum of intellectual exchange at a high level with China watchers and specialists of international politics at Yale University. Although there is an interest in China and Japan relations in the international community, the present situation is that the discussion is not necessarily based on accurate knowledge. I hope that this lecture created a stir and gave an opportunity to make U.S. researchers aware of the views and opinions of Japanese researchers.”
For further information, please visit:
http://todai-yale.jp/activities/news-events/2012japan_and_china_for_four_decades_cooperation_and_competition_since_1972_1_jp.html