Princeton University and UTokyo (the University of Tokyo) have established a strategic partnership that will support collaborations in research and teaching. An outline of the memorandum of understanding (MOU) of this agreement was announced by both Princeton and UTokyo on February 6, 2012. This agreement is an example of internationalization efforts at both universities.
Under the “Action Scenario FOREST 2015” strategy (where FOREST stands for “Frontline, Openness, Responsibility, Excellence, Sustainability, and Toughness”) , which was announced by President Junichi Hamada in 2009 soon after his installation to the presidency, UTokyo has been pursuing a program of internationalization that includes developing a global campus and promoting diversity and the pursuit of excellence in scholarships.
Princeto 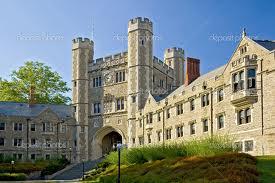 n, whose globalization effort is outlined in its 2007 “Princeton in the World” report, signed earlier similar strategic partnerships with the University of São Paulo in Brazil and Humboldt University in Berlin in November 2012 and January 2013, respectively.
The MOU governs the strategic partnership between the two universities, and a joint governing committee comprised of faculty and senior staff from both institutions will seek out and review project proposals, but individual faculty initiatives will be the driving force behind the development of projects.
Dr. Masako Egawa, executive vice president of UTokyo, who also serves FUTI as a director, said “It makes me extremely happy that this memorandum of strategic partnership has been signed based upon the research collaboration in many disciplines over the years and mutual trust between the two universities. In particular, undergraduate student exchange is epoch-making, providing great opportunities for students at both universities. I hope that the globalization of UTokyo will accelerate through this partnership,” she said.
Prof. Jeremy Adelman, director of Princeton’s Council for International Teaching and Research, said: “What makes this partnership with a world-class university — the University of Tokyo — so important for Princeton is the breadth of the collaborations, spanning so many disciplines and interdisciplinary fields, from astrophysics to international affairs, to history and literature. It is precisely this variety that makes Tokyo so compelling to us.”
Professor Masashi Haneda, vice president and director of the Division of International Affairs at UTokyo called the partnership “excellent news” and noted: “This is the first strategic partnership for UTokyo in the area of international academic exchange. We can now expect interaction in both education and research with a prestigious American university to progress rapidly.”
Dr. Masaaki Yamada, FUTI Director of University Relations, who has been involved in multiple research and educational collaborations with UTokyo and many other leading universities says : “While I almost feel this initiative is overdue, I will be pleased to contribute to this new strategic collaboration directly through my fields of research and education, and through FUTI as well.”
FUTI President Hisashi Kobayashi, a former Dean of Princeton’s Engineering School, who is currently the Sherman Fairchild University Professor emeritus of the university, remarks: “I am delighted that both of my alma maters have entered such an important relationship. I hope that FUTI can contribute to this partnership in some fashion.”