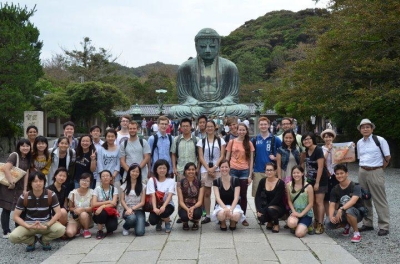 Group in front of the Daibutsu in Kamakura

The roster of 2012 award recipients and their reports have been uploaded to the News section and the blog page of FUTI’s website.
As reported in Newsletter No. 5 and in this issue, ten (10) UTokyo students received a FUTI International Leadership Award (FUTI-ILA), which provided them with summer scholarships. Two students  participated in the Global Summer Program (GSP) at the University of California at Berkeley (UCB) ;  two in the GSP  at Yale University; two in Yale’s English Language Institute (ELI); and one in Yale’s Summer School (YSS).  In addition, three students found their summer schools on their own, instead of GSP or ELI/YSS (which are coordinated by the Oversea Study Program Office of UTokyo) and applied to FUTI for financial support.  The amount of each FUTI-ILA ranged from $3,000 to $4,200 this summer, depending on the program’s cost and the students’ need.  Some of the UTokyo students received additional scholarship  from JASSO (Japan Student Services Organization) , and/or support from Yale or UCB, which in some cases waived entirely or partially their tuition fees.   UTokyo also provided financial support to most of the students from abroad.
The number of FUTI –ILA  recipients from  U.S. universities was eight (8) this year. Two  were enrolled in the GSP at UTokyo, three in the University of Tokyo Research Internship Program (UTRIP) organized by the School of Sciences of UTokyo; and three MIT students did internships at UTokyo  through the arrangement of the MISTI (MIT’s International Science and Technology Initiative ) program.  “We were much delighted that a large number of outstanding UTokyo students and U.S. students applied for our 2012 summer scholarship program.  In the case of UTRIP program, for instance, we received over 40 applications, and many of them were very strong candidates, so it was a great challenge for us, the FUTI scholarship committee, to select three winners from such a large pool of strong applicants,” says Dr. Masaaki Yamada, Director of the University Relations of FUTI, a Distinguished Research Fellow at Princeton Plasma Physics Laboratory.
“Many of the UTokyo students who spent this past summer in the U.S. seem now to be seriously considering doing their graduate study or post-doctoral research in the U.S.  The students from U.S. universities uniformly report that they had a great time at UTokyo and came back with a very positive impression of UTokyo, its programs  and the Japanese culture and society.  We are grateful to the program coordinators, professors and their staff at UTokyo and U.S. institutions who hosted these students. I also thank Shintech, Inc. and our generous alumni in the U.S. and Japan who financially support our programs.  I hope that the donors will find it very rewarding, as much as I do, by reading the students’ reports, that the FUTI awards have impacted their  view of the world and their career plans in a profound way,” says FUTI President Hisashi Kobayashi.
The reader can click here to jump to the roster of FUTI scholarship recipients, or clicking here will take you to the blog page where all the reports are posted.  Alternatively, if you click a student’s name in the list below, it will take you to his or her photo and relevant information such as their school, major field and the summer program he/she attended.  By clicking the program name in the roster, you will arrive at their reports with interesting photos.  In addition Ms. Olivia Waring and Ms. Wenyu Zhang report their interesting experiences and findings on their blog pages.
The ten UTokyo Students who received this year’s FUTI International Leadership Award are listed below with the summer program and the US institutions where they studied.
GSP at UCB or Yale

ELI or YSS at Yale

The eight U.S. Students who received FUTI-ILA are shown below with their institutions.
GSP at UTokyo