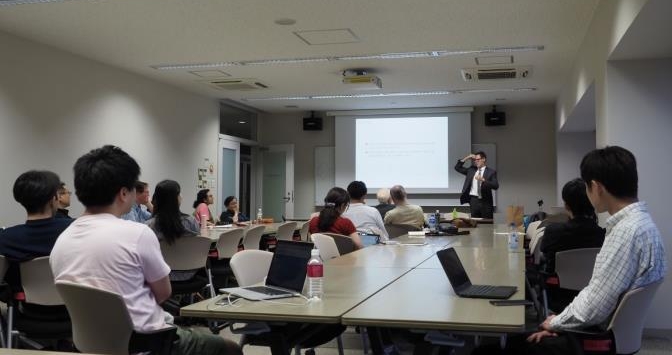 The 15th Yamakawa Kenjiro Memorial Lecture was delivered at the University of Tokyo by Professor Alexander Coppock from Yale University. The lecture consisted of two talks: the first at Komaba Campus on 28th and another at Hongo Campus on 29th May.

Professor Aleander Coppock is a rising star in the field of experimental survey research and a recent arrival at Yale. He received his PhD in Political Science from Columbia University and has taught at Yale since 2016. He is a resident fellow of the Institution for Social Policy Studies and Center for the Study of American Politics. His research focuses on how individuals incorporate new political information and whether persuasion changes the voters’ political opinions. He is also a member of the DeclareDesign, which provides software packages to diagnose research designs. His work has appeared in many leading academic journals such as Proceedings of the National Academy of Sciences, American Journal of Political Science, Journal of Experimental Political Science.

The talk at Komaba Campus on May 28th was titled “Persuasion in Parallel,” which was hosted by the university of Tokyo Center of Philosophy (UTCP). 20 participants from the University of Tokyo and other universities attended the talk. Following welcome address by Professor Nobuhiro Hiwatari (Institute of Social Science), Professor Coppock discussed his latest research on political persuasion. Contrary to the common wisdom that political persuasion is not effective and is inconsequential, Professor Coppock, drew examples from his own experimental survey results as well as those of others to demonstrate that people change their opinions in the direction of the given information regardless of their partisanship. Furthermore, he was able to estimate the extent and the duration of that effect. The estimation is made by measuring pre-treatment characteristics and then randomly providing subjects with persuasive information (or contrary information) as treatment and, then, by analyzing the post-treatment attitudes. Professor Coppock listed as an example the experiment by Chong and Druckman (2010). This study gave subjects pro or con information on the Patriot Act and analyzed the attitudes before and after the treatment, finding that the subjects given con information supported the Act less, while subjects given pro information supported it more. The results showed the same parallel patterns regardless of whether the subjects were Republicans and Democrats. Professor Coppock also explained his recent experiment on the federal minimum wages, in which subjects were assigned to watch either pro- or anti-minimum wage videos and asked their opinions afterwards. The results indicated that anti-video group increased opposition and provideo group support for federal minimum wages, regardless of their initial position on the issue. After one hour’s talk, the section of questions and answers was held, where interesting questions were raised, and an active discussion took place.

The second talk titled “When to Worry About Sensitivity Bias: Theory and Evidence from 30 Years of List Experiments”, took place at Institute of Social Science (Hongo Campus) on May 29th. 19 scholars and graduate students from the University of Tokyo and other institutes attended the talk. Sensitivity bias in political surveys refers to the situation in which respondents give socially desirable answers (“social desirability bias”) to politically sensitive questions instead of revealing the truth. An accurate estimate of the scope and nature of sensitivity bias is critical to make the research reliable. Professor Coppock discussed three topics pertaining to the issue: 1) the reference group theory of sensitivity bias, 2) the sensitivity-variability tradeoff and 3) the effects of direct and indirect measurement on this tradeoff. He explained the reference group theory of sensitivity bias as an alternative to the dominant social desirability bias view, which explains sensitivity bias as a result of respondents trying to avoid embarrassment and project a favorable image to others. By comparison, the reference group theory examines whether respondents have a social referent in mind, whether they think their responses would be disclosed to social referent, what they regard as the preference of the social referent, and what their perceptions of the costs are for failing to give the desired response. Professor Coppock examined whether indirect measurement (list experiment) could mitigate the sensitivity bias and if so at what costs. He illustrated the logic of the list experiments by using a vote buying survey after the 2007 Kenyan elections (Ktamon 2016) as well as his own research. He explained how sensitivity bias was problematic in some topics such as authoritarian repression and vote buying, but not other topics such as prejudice, race, and religion. As a result of his meta-analysis of a large amount of past list experiments, he showed that although direct questions were biased they produced low-variance estimates, whereas list experiments were unbiased but they were approximately 7 times more variable than direct questions. Based on the persistence of the sensitivity bias-variability trade-off, he concluded that list experiments would be meaningful only when they are conducted with a very large sample size and when the sensitivity bias is expected to be substantial. The floor was open to questions during the one-hour talk, which was followed by further inspiring questions. Lively discussions continued over half an hour, making to the lecture a great success.

The Yamakawa Kenjiro Memorial Lectures are made possible by the financial support of the Friends of Tokyo, Inc. (FUTI) in cooperation with the McMillan Center, Yale University.

* Dr.Yamakawa Kenjiro was Yale University’s first Japanese student who graduated with a Bachelor of Physics in 1875.After his graduation, he led an accomplished career as a renowned physicist and professor at the University of Tokyo.Later, he served as the President of the Imperial University of Tokyo, Kyoto, and Kyushu and devoted himself to thedevelopment of higher education in modern Japan. The Yamakawa Kenjiro Memorial Lectures have been delivered byYale faculty members in Tokyo since 2013.