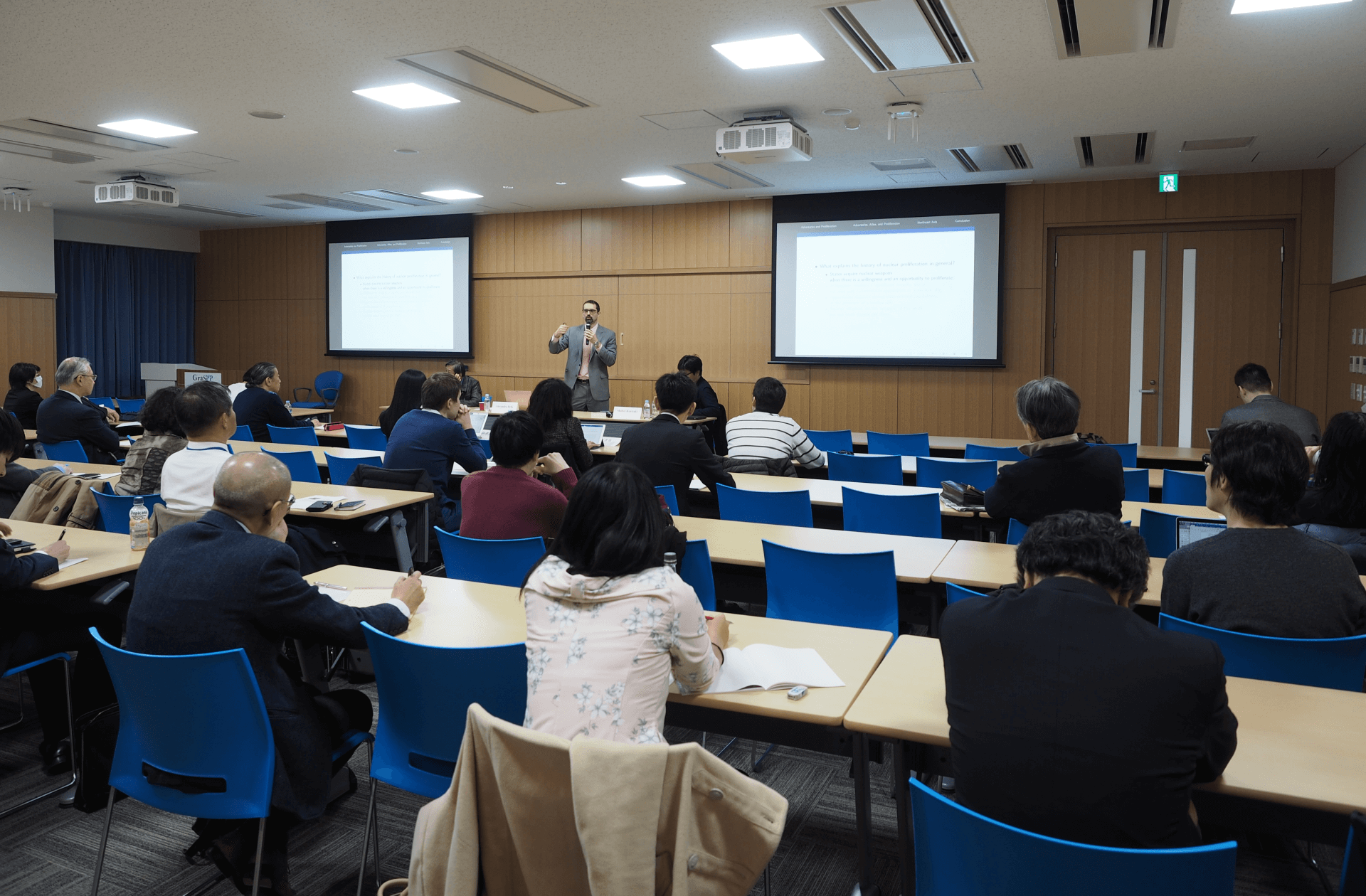 Professor Alexandre Debs was the guest speaker for the 13th Yamakawa Kenjiro Memorial Lecture (sponsored by FUTI). Professor Debs delivered two talks: the first talk was held at Komaba Campus on December 18th and the second one at Hongo Campus on the 19th.

Professor Debs’ talk at the International Relations Department of Komaba Campus was titled “The Strategic Tensions of the July Crisis”. About 16 scholars and graduate students attended the seminar intended for international relations specialists. Although most historians agree that the July Crises led to the First World War because leaders expected that they can win relatively easily, such “mutual optimism” is a theoretical impossibility within the predominant game-theoretic explanation of the causes of war. A rationalist explanation of war based on mutual optimism is possible only when one relaxes the axiom that leaders calculate the outcome of the armed conflict and assumes that leaders have to explain the reason for war to the domestic public. Based on these points, Professor Debs presented his model which coherently explains the mutual optimism of the July Crisis, arguing that belligerents on all sides were unilaterally optimistic when the enemy’s aggressiveness facilitated the selling of the war to their public and reinforced their belief that they could win in a short time at relatively low cost.

The 60-minute talk was followed by comments by Dr. Yuri Shiraito (an assistant professor at the University of Michigan and an alumnus of UTokyo’s Law and Politics School), which opened a lively discussion. The intensive discussion was of high quality thanks to the graduate students who actively raised a wide range of pointed questions and related issues.

The second lecture was held at Hongo Campus on December 19th and was titled “The Strategic Causes of Nuclear Proliferation: Northeast Asia in Comparative Perspective”. The talk was open to the public and was co-sponsored by the Policy Alternatives Research Institute (PARI) and the Graduate School of Public Policy (GraSPP). Around 45 participants attended. Following introductory remarks by Professor Nobuhiro Hiwatari (Institute of Social Sciences), Professor Debs gave an outline of his new book, which presents an innovative explanation on the causes of nuclear proliferation and revisits the issue of effective counterproliferation. Based on a formal model, tested by all known cases of nuclear proliferation attempts, he argued that countries acquire nuclear weapons when they are exposed to a serious security threat, can afford obtaining such technology, and cannot depend on major powers to provide nuclear deterrence against a common foe. As such, counter-proliferation is likely to succeed if adversaries can make credible threats of a preventive war and/or allies can provide security assurances before a country’s nuclear program bears fruition.

He concluded that threats are most effective against weak potential proliferators and assurances are effective with strong potential proliferators. Thus, preventive threats are unlikely to be effective in the case of North Korea, which already has the capability to destroy Seoul, whereas Japan and South Korea remain non-nuclear due to assurances from the US. Professor Shuhei Kurizaki (Associate professor at Waseda University) explained to the audience the force and novelty of Professor Debs’ theory before opening the floor to questions by the general audience. Thought provoking questions entailed, making this talk as much of a success as the previous day’s seminar

The Yamakawa Kenjiro Memorial Lectures are made possible by the financial support of the Friends of Tokyo, Inc (FUTI) in cooperation with the McMillan Center, Yale University

*Dr.Yamakawa Kenjiro was Yale University’s first Japanese student who graduated with a Bachelor of Physics in 1875. After his graduation, he led an accomplished career as a renowned physicist and professor at the University of Tokyo. Later, he served as the President of the Imperial University of Tokyo, Kyoto, and Kyushu and devoted himself to the development of higher education in modern Japan. The Yamakawa Kenjiro Memorial Lectures have been delivered by Yale faculty members in Tokyo since 2013.