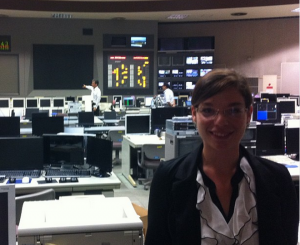 I was able to go to a conference at Japan’s National Institute for Fusion Science (NIFS) and I saw the Large Helical Device (currently the largest operating stellarator in the world!). This is me in the control room for the device. 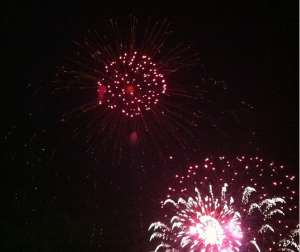 Fireworks from the matsuri at Nagareyama, a neighboring town of Kashiwa

This summer I was lucky enough to be an undergraduate member of the Takase-Ejiri lab at the University of Tokyo Kashiwa Campus. This laboratory focuses on magnetic confinement nuclear fusion research on a spherical tokamak called the TST-2. With a graduate student laboratory population of around 13, it was small but everyone has their own special area of expertise. From lower hybrid waves (a wave that can be used to heat the plasma) to plasma turbulence measurements (turbulence causes transport of particles which can lead to lower confinement times for the plasma), it was fun to see what everyone was working on. I began my internship in June 2013 and began working on a diagnostic that would be used to measure temperature fluctuations of plasmas made by TST-2.
Temperature fluctuations in traditional tokamaks are usually measured through electron-cyclotron emission waves (ECE), however the situation is different in spherical tokamaks including the TST-2. Spherical tokamak plasmas are denser than those found in traditional tokamaks, which makes ECE waves unable to propagate through the plasma into a detector outside of the machine. Therefore, Electron Bernstein Waves (EBW) are used instead. EBWs are electrostatic waves, which means that they can propagate through a medium like a plasma but are unable to travel through the vacuum chamber located just outside the plasma to reach our detector. However, this problem can be avoided since the EBWs are able to convert into waves that can propagate through a vacuum at a specific spot in the plasma called the upper-hybrid resonance. It is these mode converted waves (in our case, we measure extraordinary mode, called X-Mode) that are measured by the detector. 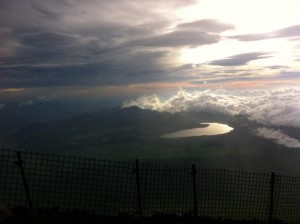 The view from Mt. Fuji during the climb down

At the lab, I worked together with an assistant professor (Naoto Tsujii, himself a graduate of MIT) to modify and complete the circuitry for the detector. After a test run on the TST-2 machine, we realized that in order to obtain a proper temperature measurement it was necessary to also measure the density gradient of the plasma at the upper hybrid resonance layer in order to find an accurate value for the mode conversion efficiency from EBW to X-mode waves. Therefore, we modified the circuit again to include a second antenna that was used for reflectometry. A reflectometer sends electromagnetic waves into the plasma at a specific frequency, which will then propagate until it hits its density cut-off layer, and will then reflect and be detected by the same antenna we used for EBW emission. Therefore, we use a frequency that has a density cut-off near the upper-hybrid resonance in order to obtain the density gradient there. 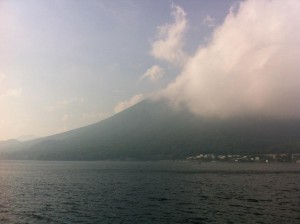 Clouds starting to crawl over the mountains in Nikko during sunset

Unfortunately, as soon as we finished modifying the diagnostic, I had to return to MIT to start the fall semester so I wasn’t able to analyze any data that had a density gradient measurement from the plasma. I was able to obtain a preliminary temperature profile that did not contain the mode conversion efficiency, however. 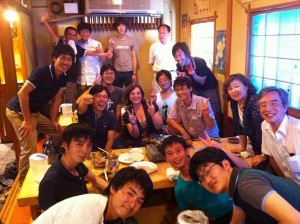 My lab and I on my last day in Japan

My experience in the Takase-Ejiri lab is unforgettable. I learned so much in the 3 months that I was there, about both physics and Japanese. Although much of the plasma physics was unknown to me, both the students and the assistant professor were willing to help me and offer explanations. I believe that I learned more plasma physics in these past 3 months than in my previous research experience which lasted 2 years! But studying at the University of Tokyo wasn’t just about learning physics, I learned a great deal of Japanese from my new friends in the lab. Being able to practice a foreign language with native speakers helped me out a lot and I appreciate the solidarity that exists in the Takase-Ejiri lab. Everyone works together, and I felt included and like I was part of the group.
I am extremely thankful for the Friends of UTokyo program for giving me this opportunity to do research in Japan! From doing cutting-edge research to climbing Mt. Fuji to viewing the beautiful waterfalls in Nikko while dragonflies hovered over-head, there are so many unforgettable memories. I believe strongly in international collaboration, so I’m hoping that I’ll be able to return to Japan some day and continue this wonderful experience!
Facebook1
Twitter0
Google+0
LinkedIn0
Pinterest0
Subscribe to the FUTI Newsletter