Supporting the Career Development of Graduates 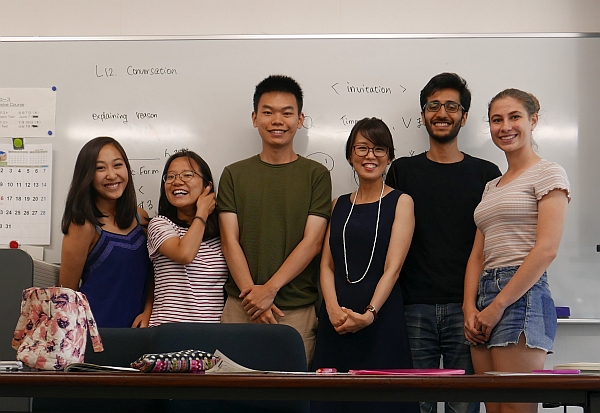 Since 2016, the Ito Foundation U.S.A.-FUTI Scholarship has awarded roughly ten highly motivated University of Tokyo students and alumni each year. The program is operated by FUTI and financially supported by the Ito Foundation U.S.A.* Applications are accepted in several different categories, as eligibility for the scholarship is diverse. Of these categories, the one that makes this Scholarship unique is the category for those who have graduated from UTokyo in the past. The recipients in this category often have unique characteristics that are different from those in other categories. The quality of applications enhanced, and the number of applications increased between 2019 and 2021, making it very competitive. In this article I am going to discuss this program and its unique features in detail.

Cumulatively speaking, of the total number of recipients in this category, only one in three have not had any work experience, but in recent years since 2019, almost all of the recipients have had a few years of work experience before deciding to pursue a study abroad with their renewed resolution. It is truly the distinctive characteristic of the Ito Foundation U.S.A.-FUTI Scholarship to be able to support their ambitious motivations. A closer look at the number of years that have passed from receiving their bachelor’s degree to becoming a recipient of the Scholarship shows that a third of the recipients in this category spent 9-10 years in a graduate study and in the work force, and another third spent 5-8 years, while the remaining third spent 1-4 years as a graduate student. Each individual has come to redefine their life objective and wanted to study abroad to learn more profound knowledge and experience in the discipline.

Among those who have had work experience, there are those who have been successful in international organizations, working in such positions as a consultant to support government entities in international activities, or engaging in the management of theaters. While they have had successful activities in respective areas, they wanted to study abroad because they felt that they needed more specialized expertise and experience to make a better contribution. For example in one instance, a recipient became a government official in science, but with the desire to do a better job by studying the public policy of his area, he decided to study abroad privately and independently from the government-supported study abroad program.  Another example which requires a high level of courage and determination, is found in one who, despite having a successful international career at a major firm, felt that his true calling was to support developing nations, and decided to resign from the coveted job to pursue studies in business management.

Many graduates from the law department seek career tracks as administrative officials in the government or corporations, but this is not the case in this “Past Graduate” category. They usually become certified as lawyers and work at law firms for some time before having various desires, such as starting his own company after realizing limitations of supporting client firms, working in a position to set standards of international contracts, or being certified as a lawyer in the US as well in order to be more effective in international negotiations. Sometimes it is possible to receive financial assistance from law firms, but the cost of a law education in the US can be quite high and further assistance from outside scholarship programs often becomes necessary.

In 2021, we were faced with a new kind of difficulty in this category. All of a sudden, although few, we received applications from senior professionals who have been already established in their careers after being in the work force for many years, long enough that they would have been settled financially and societaly but still with some discontentment. In a society where lifelong learning is necessary, we believe that deciding later in life on a study abroad is admirable, and a desire to turn life around with a study abroad is understandable. However, we felt that we should be cautious about these cases judging from the objectives of this Scholarship, and that we should give priority to those who are in the early stages of building up social status. Consequently, we had to respectfully decline applications from already established senior professionals.

In the application process, the Ito Foundation U.S.A.-FUTI Scholarship asks information about the yearly budget plan along with the applicant’s own contribution, and any support from other scholarships or corporations. With these pieces of information it is possible for us to surmise the situation accurately and make a fair judgment on the financial needs of the applicant. With the rise in expenses, however, it is common to see situations where a sponsorship worth millions of yen would only cover tuition. Some universities even require from applicants submission of bank account balances of the individual or family on top of a letter of proof of scholarship support before the admission decision. In those situations, applicants greatly appreciate even partial support from our Scholarship.

Scholarship from the “Past Graduate” category often plays a uniquely important role in the applicant’s life. Although there are issues that needed to be clarified as mentioned above, it is our pleasure to volunteer our energy and time to carefully evaluate applications in the “Past Graduates” category who are looking to further their career. We are committed to support those who have the most potential to utilize the Scholarship and make important contributions to society.

Note: Friends of UTokyo would like to express its appreciation to Dr. Shig Matsushita for his contribution of this article.

*Mr. Masatoshi Ito is the chairman of the Ito Foundation and also honorary chairman of Seven and i-Holdings Co.