Summer Program at the University of Tokyo 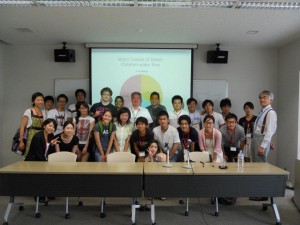 At the University of Tokyo, I took a course called “Japan In Today’s World.” Various speakers lectured on many aspects of Japan in relation to the rest of the world, such as aid giving, business models, politics, refugee policies, and more. Most courses had to do with current events, though some were also more historical.
The program’s students were from many different countries (Australia, England, Singapore, Denmark, China, Sweden) and in addition, there were at least twenty Japanese UTokyo students. This is a pretty unique situation at the University of Tokyo. While some foreign students do study there, they are often unable to interact with Japanese students at the level that we were. 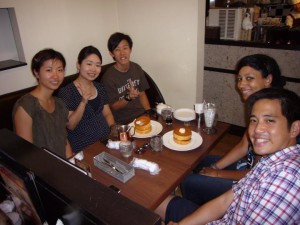 Classes were taught in English, and the discussions among students were also in English, although if the Japanese students learned some of us could speak Japanese, outside of class time we would speak in both Japanese and English. 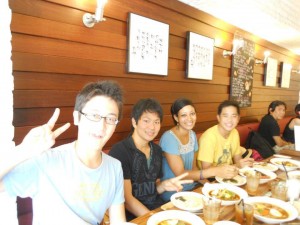 Classes were every morning from 9 to 12:10. After classes, we GSP students often had lunch with each other and the Japanese students, often at the cafeteria on campus. Sometimes we went on outings to various recommended restaurants or neighborhoods with the UTokyo students. For instance, once of the UTokyo students learned I was interested in anime and manga, so she took a few of us on a trip to Ikebukuro, which – unlike Akihibara, which is geared toward men – is an anime/manga hub more geared toward women. On another occasion, one of the Japanese students took us to a wonderful café with pancakes and ice cream, and another student took us to his hometown for delicious soup curry. 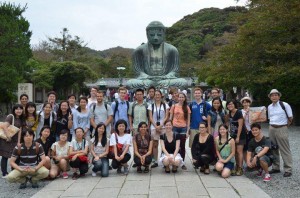 Group in front of the Daibutsu in Kamakura

The classroom experience was very well complimented by the time we spent with each other outside of class, asking about Japan and the other countries where GSP students came from. Unlike many situations where foreigners may study in Japan, we were never isolated from the Japanese students, and we weren’t isolated among ourselves because there were only one or two of us from each country in the class, thus we all interacted with people from other places.

During our trip we also had a couple of very interesting study visits. We saw historic sites and temples in Kamakura, and a 1930s Japanese house which had belonged to a middle class family.

Through this program, we all learned a lot about each other and our countries, Japan, current events, and what makes for a really excellent international experience. I am grateful for the opportunity to have taken classes at a top university in Japan, and I am especially glad to have met so many new friends from Japan and around the world.