It feels like only yesterday that I flew to New York to start my Urban Planning master’s program at Columbia GSAPP. The past two years have been one of the most challenging but rewarding time I have ever experienced. This report first summarizes the highlights of my academic experience in New York, offers a short analysis of the differences between the academic environment in the University of Tokyo and Columbia, then concludes with acknowledgements. 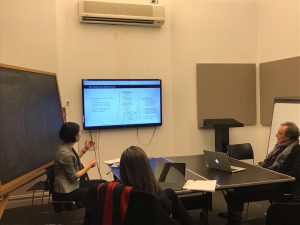 Presenting at my thesis defense. I gave a 10-minute presentation, followed by a 40-minute discussion with my instructor, reader, and the audience.

My urban planning education cannot be described without mentioning my master’s thesis. Thesis research was extremely challenging but intriguing at the same time, and I enjoyed every minute of it. Since Columbia does not have a laboratory system like the University of Tokyo, students are free to write about a topic of their own choosing while receiving guidance from a supervisor. My thesis, entitled Subsidizing the Resilience Commons: A Study on the Community Rating System and CRS Research, focused on scalar relationships between different levels of government in the U.S. and its effect on local level resilience planning. In addition to quantitative analysis using mapping software, I conducted interviews to state- and local- level government officials in North Carolina as well as the Federal Emergency Management Agency. Through this mixed-methods approach, I found that the current policies to incentivize resilience planning at the local level was creating disproportionate impacts to urban and rural communities in North Carolina. After completing the thesis writing portion, I defended my thesis in front of my supervisor, reader, other professors, and friends within GSAPP. It was definitely one of the projects I worked hardest on at Columbia, and I was extremely thankful for the support I received from faculty members and classmates. I will always remember the sense of relief and accomplishment as we headed to the bar to celebrate the end of the thesis project.

In addition to thesis, I enrolled in many inspiring courses. One class I took during my final semester sticks out in memory; it was called the Digital Restructuring of Urban Space by Professor Leah Meisterlin, a discussion-oriented class focusing on how emerging digital technologies such as urban broadband, Uber, and Airbnb was changing traditional urban planning practices. My final essay for this class was entitled Tacit Territorialization – The Transformational Effects of Uber’s (Semi-)Deployment in Japan –. I had conducted many case studies during my classes at GSAPP, but this was one of few that focused on Japan. Through reviewing minutes from Japanese government committee meetings and journalism articles, I dissected the regulatory reform triggered by Uber’s attempt to create a ridesharing market in Japan and analyzed its implications for urban planning. Although I was initially worried whether my education in the U.S. would be applicable once I returned to Japan, I was quickly reassured that Columbia had equipped me with the ability to ask the important questions and make necessary considerations regardless of the site or target of analysis. 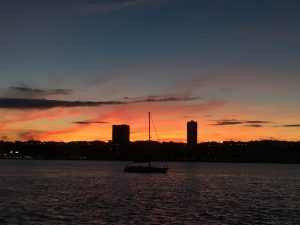 Sunset at Riverside Park, just a 10-minute walk from my dormitory on the Upper West Side. Jogging here allowed me to relax and recharge.

Another class provided the opportunity for me to marry my two academic backgrounds through organizing a joint panel discussion between Columbia and the University of Tokyo. As part of a class at GSAPP entitled Practicum: Global Practices in Urban Risk Reduction and Resilience, we conducted a comparative study between Istanbul and Kobe to analyze both cities’ respective approaches and challenges to becoming resilient after experiencing massive earthquakes. Learning that the class involved a field research trip to Japan, I took this opportunity to connect Professor Ebru Gencer, who taught the class at GSAPP, and Professor Aya Kubota, and urban planning professor at the University of Tokyo, and organized a joint panel discussion on urban risk reduction. Inviting lecturers from Architecture, Planning, and Civil Engineering departments, the event was full of stimulating ideas and lively discussion. It was also an emotional moment for me to see a professor from Columbia speaking at the place where I started my higher education.

Stark differences exist between the academic environment at the University of Tokyo and at Columbia. First, classes at Columbia focused not only on knowing but also on thinking, or developing the ability to think; they were more participation oriented rather than lecture based, students were required to complete readings prior to class and to come prepared to discuss, and were encouraged to share their own views based on their previous education and professional experience. I remember being awe-struck by my classmates’ ability to ask sharp, fundamental questions, and to deliver compelling arguments during the discussion.  Second, professors were less involved in administrative matters and were able to devote a larger portion of their time to teaching and research. Sharing class materials, holding lab sessions outside of class, and grading were usually under the purview of teaching assistants. Other administrative work was managed by program staff. This allocation of responsibilities enabled professors to devote their resources to what they did best. While I did not notice any differences in the intellectual capabilities between students in the two schools, the contrasting learning environments fostered noticeably different sets of talents and abilities. 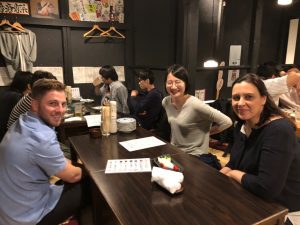 With my professor and classmates at a restaurant in Kyoto, during our research trip.

The GSAPP graduation ceremony was held on May 12th, 2018. I was humbled to receive the American Institute of Certified Planners Outstanding Student Award, an award granted to one student in the Urban Planning master’s program for “outstanding attainment in the study of Urban Planning.” I remembered how terrified I felt on my flight to the U.S. before my first semester at Columbia, and how often I was (and still am) frustrated at not being able to express my opinions clearly in English. I still have a long way to go, but it was gratifying to know that some of my efforts had paid off. At the same time, I felt extremely thankful to everybody who supported me throughout my time in the U.S. I was privileged to gain so many talented friends, meet extraordinary faculty members who were generous with their time and resources, and feel the support from friends and family waiting back home in Japan. None of this would have been possible without them. Last but not least, I would like to thank Ito Foundation U.S.A and Friends of UTokyo, Inc. for their support throughout my years at Columbia. Their generousity was instrumental to my studies, and I will do my best to give back what I received by using my education and experience to contribute to Japanese cities in the future.