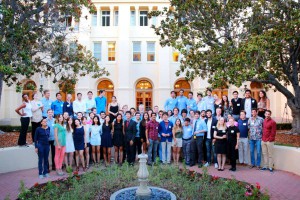 This summer I attended the Stanford Summer International Honors Program(SSIHP) as the only student from UTokyo. The SSIHP was a two-month program where students from fourteen countries around the world gathered and spent together in the same dorm, as well as taking classes at the Stanford Summer Session.
I had lived in the US for five years and was not so bad at English, but I was not confident in my English and had some trouble in the first week adapting to the English-only environment. However from the second week I tried to interact with as many people as I could, all having different backgrounds, nationalities and majors. This enabled me to learn many valuable things from them for the remaining seven weeks, as well as improving my English speaking skills. 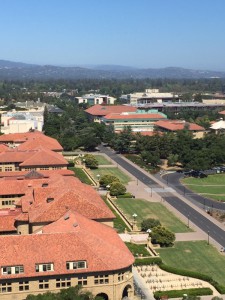 In the summer session I enrolled in two classes, a math class and an astronomy class.
The math class was “Linear Algebra and Multivariable Calculus”, which was mainly a review of the math courses I took during my freshman year. The class was definitely not like the ones in Japan; not only many people were asking questions during class, but the teacher was also asking questions to students too. Though each class had only fifty minutes I thought it was very productive.
The astronomy class was called “Introduction to Observational Astronomy”, which was exactly my major in UTokyo. It had fifty-minute lectures two days a week, but also had a 3-hour lab each week, from 9 pm to midnight, where we had the opportunity to go to the student observatory and use the telescopes every week. This lab was fascinating to me, because in UTokyo I never had the chance to actually use the telescopes. It was great to actually move the telescopes and use some software to get the actual beautiful images of stars and nebulas. 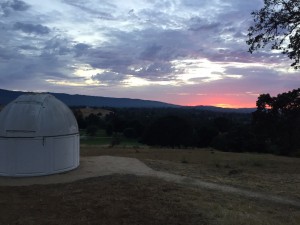 I also audited one class, which was a seminar on environmental management. Different lecturers came to Stanford each week and gave talks for thirty minutes, and after the talk the students’ questions followed. The topics were mainly about environmental resources in California such as crops, livestock, fisheries, and water. This seminar was very interesting to me; I had lived in California for five years when I was a primary school student, but there were a lot of things I learned here that I did not know.
The campus life was also wonderful. The university was huge – it was indeed the largest university in the US. The weather was sunny throughout the summer (not a single rain for all 56 days I stayed), so it was a pretty good environment to sit and sleep in the grass or have a jog around campus, while many people also went to the gym to exercise. I found the gym to be a great place where I could study and do exercise at the same time; I spent a lot of time reading books while riding the stationary bikes. 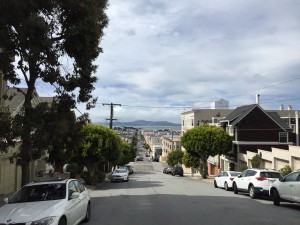 The program was long and I had lots of free time, so I also went outside campus too with my friends. It took an hour by train to San Francisco, but we managed to do a lot of things there, such as walking around the coasts and taking photos, going to Japan Town, rooting for the San Francisco Giants at the ballpark and watching the July 4th fireworks. San Francisco had a lot of Japanese restaurants, which helped me from missing Japan throughout the summer. I went to some of the restaurants with the Japan-lovers I found in the program, and I was very pleased to see them enjoying Japanese food. The field trip to the Monterey Bay Aquarium also fascinated me, with lots of sea life in the bay area and the ocean I could not see in Japan. I also went to UC Berkley too; it was pretty different from the atmosphere at Stanford, with a smaller area but lots of greens.
As a conclusion, I would like to express my deepest thanks to FUTI for giving me this wonderful experience. This two-month program meant a lot to me, and will definitely become a big step towards my future.
Facebook0
Twitter0
Google+0
LinkedIn0
Pinterest0
FUTI 奨学金