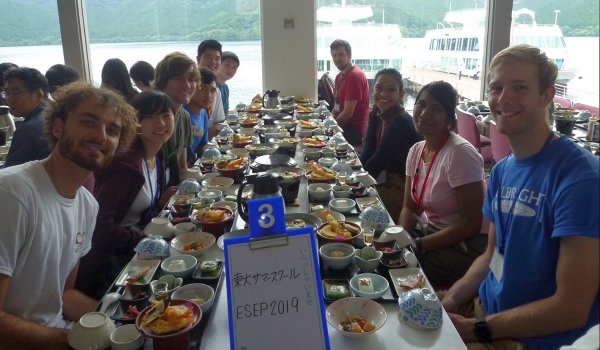 FUTI manages two types of scholarships, the Global Leadership Award supporting short-term study abroad and the Ito Foundation U.S.A.-FUTI Scholarship for mid-long term study abroad. [For further information on these programs, please visit friendsofutokyo.org/scholarships-grants.] At its meeting on March 14, 2020, the Scholarship Committee determined that “while the effects of COVID-19 are very difficult to assess, the scholarship selection should proceed as usual at this time.” However, the effects of the virus have turned out to be far greater than initially anticipated. As program cancellations were announced one after another, the Committee’s plans inevitably had to be changed. At this point, short-term (summer) programs have already been affected extensively and mid-long term studies are also beginning to feel the impact of the pandemic. Furthermore, there is a distinct possibility that the situation will continue to worsen. Scholarship Committee Chair, Dr. Shigenori Matsushita stated:

Thanks to our supporters, we were able to select many impressive, highly goal-oriented students. However, due to COVID-19 pandemic, many of these students were deprived of the opportunity to study abroad or are in danger of losing those opportunities. This year, working within these constraints, we hope to contribute still to the globalization of the University of Tokyo and its students.”

For this program, the Scholarship Committee originally selected 12 US university students to study at UTokyo during the summer of 2020. However, due to program cancellations at both US universities and UTokyo, none of the US students will be able to utilize their scholarships. Of the seven UTokyo students selected by the Committee to participate in US university summer programs, only a few are likely to realize their plan. Two of these students had to cancel their plans because program coordinators at the UTokyo withdrew support; two cancelled of their own personal accord; two decided to take online programs offered in place of their original in-person courses at US universities; and one is still hoping to study abroad at a US university. Thus, in total, only three students will receive their scholarships. The chart below illustrates the number of awards granted with the 2020 figures representing “current numbers” and the number of original committee selections inside the parenthesis.

Of the ten students initially selected by the Scholarship Committee for mid-long term studies, four were disqualified or became ineligible due mostly to the COVID-19 pandemic. 1) UTokyo placed a ban on its study abroad program (one student affected); 2) one US host university postponed receiving foreign students for one year (one student); 3) fall semester plans were postponed until spring (two students); 4) one student decided to go to Australia rather than to the US; and 5) due to restrictions on receiving multiple scholarships, one student declined a scholarship from FUTI. Due to these circumstances, the Committee subsequently chose two students from the waitlist, bringing the total number of selected students to eight (including those in (3) above). However, the possibility of being able to commence studies in the fall remains contingent on whether the US will reopen visa applications and lift travel restrictions in time for the fall semester. In the Table below, the 2020 figures represent “current numbers” with the Committee’s original selection numbers in parentheses.

FUTI’s 2019 scholarship recipients who were already in the US when the Covid-19 pandemic struck are continuing their studies through online courses. Of those students, two have sought FUTI’s approval for a modification of their plans, as they felt it would be safer to go back to Japan and complete their online courses there rather than to stay in the US. These students made the decision to return to Japan after careful consideration of their academic and financial situation. They are taking their online classes in the middle of the night in Japan while it is daytime in the US.

This year the Past Graduates (those who already graduated UTokyo in the past) category included many applicants with unique and exceptional backgrounds, leading to a very competitive field. Those who were selected included a student on a leave of absence from work to study in the US on his own (rather than waiting for his seniority-based “turn” for a study abroad opportunity in his government office), one who left a job at a large trading company to study overseas, and a Japanese lawyer who wanted to become a licensed lawyer in the US in his specialty.

As COVID-19 spread rapidly in New York in the spring of 2020, making in-person meetings a high-risk activity, the Scholarship Committee conducted its meeting online for the first time, using Zoom. With ample preparation and talking points communicated through email before the meeting, the selection process proceeded smoothly and efficiently.

The selection process for the Ito Foundation U.S.A.-FUTI program includes an interview which was also conducted through Zoom this year. The online sessions accomplished the objective of these interviews proving that online sessions are a viable and effective alternative tool. [In the first online interview, a Committee interviewer was surprised to find the student interviewee dressed rather formally.  For his subsequent interviews, he reached out in advance to his interviewees, encouraging them to dress casually.]