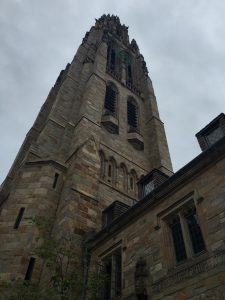 I participated in Yale Summer Session from July 4th to August 5th (five weeks) thanks to the generous support from FUTI. Most part of Yale Summer Session was held in the campus of Yale University in New Haven. New Haven was not a big city, but all we needed was provided by Yale and we did not have inconvenience. Moreover, we could enjoy many restaurants in New Haven because its downtown was near to the campus. We stayed at the dormitories of Yale. Yale has 12 dormitories, which are called “residential colleges.” I was at Saybrook College. Saybrook, Calhoun, and Berkely Colloges were assigned for Summer Session students. Breakfast, lunch, and dinner were supplied at the dining hall of Calhoun and Berkely Colloges from Mondays to Sundays. Especially on Fridays, there was a BBQ dinner, and on the second Friday, there was a community cookout. We were able to eat as much as we wanted in the dining halls, and there was a wide variety in the menu.
About the course, we were able to choose up to two courses as we like. I chose “Introduction to Psychology” and “Cell Biology.” I had the psychology classes in the morning on Mondays, Wednesdays, and Fridays. Cell Biology classes were in the afternoon from Mondays to Fridays. 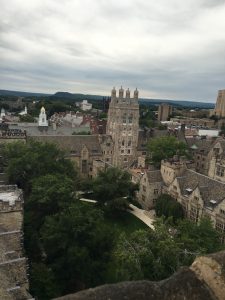 First, here I explain the details of the psychology course. It was taught by Ms. Jennifer Hirsh, who was a PhD candidate in Yale. Teaching assistant was Ms. Jurema Gobena. There was no specific textbook for this course. Lecture slides and additional readings were uploaded on the website called “Classes V2.” The usual class was composed of two parts, namely, discussion about the assignment due on the day before the class (which also means the day after the previous class,) and lecture about new topics. The assignment was related to the content of the lecture presented in the latest class. We had to read additional readings and answer questions by the teachers. For example, the additional reading was a paper on the topic which was touched in the lecture, and the questions were “What do you think the authors of the paper did well and badly?” and “Are there anything which needs more research?” There were also lab experiment assignments due on Sundays. We were asked to do some fundamental psychological experiments as a group and report the result and what we thought about the hypothesis and the result. These experiments were related to the subjects of the lectures in the previous week, such as questionnaires to others about their personalities. The content of those lectures were divided into five topics, namely, biological foundations and outcomes, cognition, development, social, and emotion. We were able to study those newly topics with fun because the teacher presented abundant examples of psychological experiments with movies and pictures. About the score, it was based on participation, assignments, and two exams. Exams were on the last day of third and fifth week. I got a brief view on psychology from this course. Besides, I learned the basic skills to conduct psychological experiments. What was important for me to study psychology in the U.S. was the diversity of students. I was surprised and amazed every time at the discussion. There were not only Yale students but also students from other universities in U.S., international students like me, and even high school students from several countries. In addition, it was good for me to study psychology in English. I had to read many pages of psychological papers and books, and speak loudly in the discussion. I had not had plenty of opportunities to discuss as a group about the academic topics in English before. 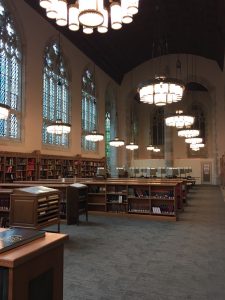 Second, here I show the details of Cell Biology course. It was taught by Professor Joseph Wolenski. He has studied cytoskeleton for many years. We used the textbook called “Molecular Cell Biology” 8th edition (Lodish et al. 2016.) Each chapter of the textbook was corresponded to each class, so it was our homework to read each chapter of several tens of pages of the textbook. Although the lecture was based on the content of the textbook, Prof. Wolenski made special lecture slides every day and tried to teach us updated research findings. Those slides were really worth studying over and over because they had many clear diagrams illustrating important functions happening in the cell. Sometimes it was hard for me to study new things in English because I had no idea at all, but I asked many questions to Professor and came to find a way to carry out those situations. Although this course was for students who already finished fundamental biology courses at Yale, international students like me were allowed to take this course. I found this course challenging, but it made me think what I did not notice when I studied biology in Japan. For example, when I took biology classes in the University of Tokyo, I just read the textbook and listened to the teachers. However, in this summer session, I was asked to think on my own how one specific function of the cell was related to cancer. We had to state our opinion in the classes actively and sometimes we needed to discuss as a whole class. With regard to the grade, it was composed of participation, quizzes, and exams. There were four quizzes and three exams.
I also enjoyed student life at Yale. Buildings of Yale were really beautiful. Especially, libraries were huge and had enough space with computer facilities to study. Moreover, the gymnasium was fantastic. I did exercise on almost every weekday. In the weekends, there were trips conducted by Yale students called Summer Session counsellors. Trips were to NY, shopping malls, a baseball game, a zoo, an amusement park, and so on. Through these kinds of activities and in everyday life, I made friends with Yale students and international Summer Session students. I found it valuable for me to know others’ perspectives.
Last but not least, I am really thankful to FUTI for giving me this precious experience. Without their support, I could not have taken part in Yale Summer Session. I will keep working hard to make full use of what I got from this summer experience.
Facebook0
Twitter0
Google+0
LinkedIn0
Pinterest0
FUTI 奨学金