"Report from the Scene" by Ito USA Foundation-FUTI Scholarship Recipients

The Ito Foundation U.S.A.- FUTI scholarship program began in FY 2016, funded by a grant from the Ito Foundation U.S.A. to FUTI. It primarily supports UTokyo students or alumni who plan to study one semester or longer at a U.S. university. For details, please visit https://www.friendsofutokyo.org/ito-foundation-usa-futi-scholarship
In AY2016-17, nine UTokyo students and alumni were selected as award recipients. They are currently studying at U.S. universities such as Harvard, Columbia, and University of California at Berkeley. Their concentration varies widely from politics, society/organizational psychology, film production, landscape architecture and physics/astronomy to urban planning. They are enrolled in either undergraduate, master’s, or Ph.D. programs.
FUTI has requested award recipients to send essays and photos about their life at the U.S. universities so that they can be posted on the “Report from the Scene” series on FUTI’s Facebook page (www.facebook.com/friendsofutokyo).
Since the study abroad is longer than one semester, students have the time to settle in and be deeply immersed in U.S. academic life. Their reports also show meaningful exchanges with students gathered from all over the world as well as local residents in the university area, which they find stimulating. Their reports indicate in detail what kind of experience they are having in an environment sharply different from Japan and how they are learning from it. We, at FUTI, feel it deeply gratifying to read their reports.
Please visit our Facebook page at www.facebook.com/friendsofutokyo. If you have a Facebook account, it would be greatly appreciated if you “like”, share, or comment on the posts.
We would like to share with you reports from our two students, Ms. Eri Furusawa, enrolled in the Master’s Program at the Columbia University GSAPP (Graduate School of Architecture, Planning and Preservation) and Myeongok Kim, an undergraduate in the UTokyo –Swarthmore College exchange program. For full reports please visit www.friendsofutokyo.org.
==========
Reporting from Columbia University, New York, U.S.
Eri Furusawa (Engineering Department, University of Tokyo, 2017), recipient of the Ito Foundation U.S.A.-FUTI Scholarship for 2016
****
Since the fall of 2017, with support from the Ito Foundation U.S.A. and Friends of UTokyo (FUTI), I have been enrolled in the Master’s Program in Urban Planning at Columbia University. 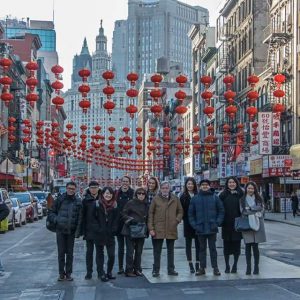 Currently I live in Columbia’s student dormitory near the campus. Students in the dorm are from various countries, majoring in a wide range of specialties such as Journalism, Social Work, Creative Writing and Business School. It is a pleasure to chat with them in the kitchen, about their home countries and majors, as we wait for the coffee machine to brew fresh coffee. For example, the other day I talked about the Tale of Genji to an Armenian woman majoring in Creative Writing.
As part of the class requirements, students in the Department of Urban Planning go out to the street of the City of New York. As our class is undertaking a project called “A New Masterplan for Chinatown” this semester, we frequently visit Chinatown located in the south of Manhattan to conduct interviews. The history of Chinese immigrants is dramatic and impressive. They came from all over China, gradually settled in New York, earned a living for their family, and won various rights while fighting racial discrimination. I can feel in the urban space the very history of America that has been shaped by immigrants. 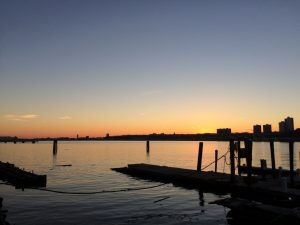 I go running at Riverside Park along the west side of Manhattan to relax from my studies. The other day, after a heavy snow fall, I saw people skiing. New York is surrounded by skyscrapers and has an image of being a noisy city. But one of Manhattan’s attractions is that there are peaceful places like the park which is accessible within a few minutes from the school.
In the United States, a new president took office last January. Every day when I see media reports, I feel that the American society is dynamically changing before my very own eyes. I treasure the present opportunity to have first-hand experience, and hope to absorb as much as possible to bring my knowledge and experience back home to Japan.
Last but not least, I would like to take this opportunity to express my gratitude to the Friends of UTokyo and Ito Foundation U.S.A. which made it possible for me to have this exciting experience.
***
Reporting from Swarthmore, PA, U.S.
Myeongok Kim from University of Tokyo, recipient of the Ito Foundation U.S.A.-FUTI Scholarship for 2016 Fall semester University Wide Exchange Program (USTEP) at Swarthmore College
**************** 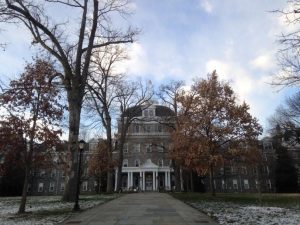 I challenged and learned a lot of new things during my exchange program at Swarthmore College.
I mainly studied physics and engineering, which are not my major, since it was a valuable chance to broaden my fields of interest. I especially enjoyed astrophysics and special relativity. The lectures were engaging, and additional activities, such as a trip to UPENN to listen to a talk about LIGO, data process of stellar image, were fascinating. 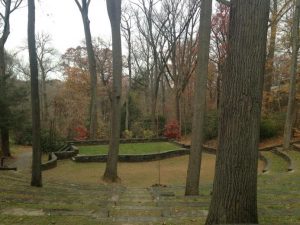 I also tried being a Japanese tutor. I had connections with a lot of interesting people in the Japanese learning community at Swarthmore. There were also a few troubles, but there were always people who were willing to help. I was especially astonished by the tight bond within the community at Swarthmore. I was very fortunate to belong to such warm community last semester.
The program was short but strong enough to influence my life. I realized my academic interests and weaknesses and could clarify what I should study from now on.
I sincerely appreciate Ito Foundation U.S.A and Friends of UTokyo, Inc. for giving me such a valuable opportunity to do an exchange program at Swarthmore College.
Contributed by: Ms. Akiko Sokai (Volunteer FUTI Facebook Page Co-administrator)