by Sari Yamashita
—
I have taken 6-weeks global summer program (GSP) held by IARU at Yale University this summer, starting from July 2nd to August 10th. My prime goal through this program was to reach certain level of English so as to be able to discuss the global issue today, by studying and having discussion with my peers from all over the world in my second language. Also, in terms of my career plans, I am going to work in a financial industry after graduation, and as I supposed it would be a better idea to have a broader view not only of finance but of global economy, this program seemed to be a great opportunity for me to acquire that. 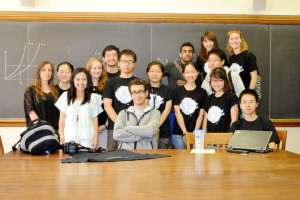 There were two courses held by this GSP, “Topics in International Economics” and “Sustainability and Institution”, and I have taken the “Topics in International Economics”.  Because my major back at my home university is agricultural and resource economics and also I had never taken courses in English, I found the course quite challenging, for it was required to speak out our opinions and thoughts in class for our further understanding of the issue. I had considered my English level not as good as my native language but nearly equivalent to it, but in academic terms, it turned out to be insufficient, so having the opportunity to read so many papers, write essays, and get feedbacks from the professor was great experience for me.
We had two classes every week, on Tuesdays and Thursdays, for 3 hours each, and in-class finished on the fifth week and the last week was kept for working on our term papers. At first, two classes seemed very easygoing, but because we had to read about 3-4 papers thoroughly for every class and we also had problem sets and quizzes, it wasn’t really straight forward. We started our classes by focusing on free trade, taking a look at both theoretical and empirical paper, moving on to exchange rate policy and finally focusing on financial crisis that has been creating a sensation all over the world today. We were always required to express our opinions about the papers and think about what may be added to make it more informative, and what kind of viewpoint is lacking from it.
Because I had hardly written an English essay before, I couldn’t at first figure out what to write on discussion paper, where you were required to criticize the paper and see it from your own perspective, but because the professor gave us detailed feedbacks afterwards, although I couldn’t do well in the first paper I handed in, I was able to work much better on the second discussion paper and term paper.
About my life on campus, I was assigned a suite at Berkeley College and lived there with students from Switzerland, China and Denmark. All of the students participating in the GSP stayed in Berkeley, so we were able to keep in close touch and build up strong friendship. As a study break we gathered in common space or buttery and played ping pong, pool, and cards. On weekends, we went on small trips to such places as beach at long island and Boston. I heard some members went to Washington DC or Niagara Falls too. Also as a program of GSP, we had an opportunity to go to the United Nations and have lunch at Yale Club after that, which I heard was really special. Such experiences made our bond really strong after 6 weeks, and so strong that we are actually planning to gather for celebrating New Year somewhere around Europe.
Through this summer program, I really felt the importance of knowing what is going on around the world and its background history. Even if I could communicate in English, if I don’t know the background of the issue or even about the country the person I talk to is from, I would never be able to have deeper conversation with them, for it would be meaningless for them to talk about such issues with those who know nothing about it. I was able to respect each other and build up good relationship with my peers thanks to my experience of living abroad and getting to know so many people over the world by joining summer camps and student conferences, but I truly felt it may have been enough to be friends but may not work at all once I start my career.

Group photo in front of “The Sphere”

It is embarrassing but many Japanese university students don’t really put emphasis on studies and especially foreign languages. Those who could speak foreign languages fluently is mostly those who had stayed abroad in that country for some period of time, and it is a rare case that someone is aiming to speak the language in professional level, either academic or business, and is realizing that. Moreover, not so many students practice having discussion, expressing out their own opinions and presenting it even in Japanese. Through this summer program, I saw how hard working everyone is, and how they regard their university life as “work hard, play hard”. With this globalized world today, unless we realize our current situation and start doing something, Japan would just be of past success and keep rolling down the hill all the way straight to the bottom.
In these senses, this irreplaceable experience at Yale not only gave me deeper understandings of international economics but helped me see my own country from other perspectives, and this will surely help me take further step forward even after I graduate and start my career. Also, because this was my first time to live on my own for so long (although I was living in a dorm with all the others and also it was only for 6 weeks), it was a great chance for me to look back on my own self, how I should spend my last half year at my university back home. I had thought I spent quite a fruitful university life experiencing many things, but it wasn’t simply enough when hearing what my peers all over the world had experienced, and I realized I had been living in such a small world.
Facebook0
Twitter0
Google+0
LinkedIn0
Pinterest0
FUTI 奨学金