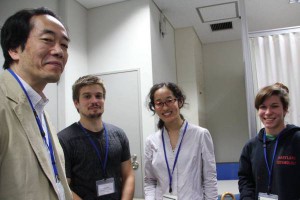 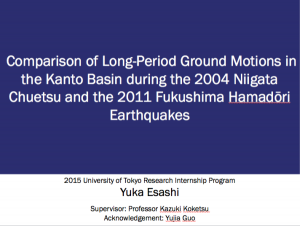 I performed exploratory research on the effect of basin amplification of long-period ground motions, specifically that of the Kanto basin. I analyzed seismic data of several large magnitude earthquakes that occurred around the Kanto basin, recorded by the National Research Institute for Earth Science and Disaster Prevention. The focus of the analysis was to investigate whether there are differences between the amplification effect on seismic waves that enter the basin from different directions, due to the irregular structure of the Kanto basin. My final presentation was titled “Comparison of Long- Period Ground Motions in the Kanto Basin during the 2004 Niigata Chuetsu and the 2011 Fukushima Hamadori Earthquakes”, in which I concluded that the amplification effect was greater for the Niigata Chuetsu earthquake that occurred in the north-west of the basin, than for the Fukushima Hamadori earthquake that occurred in the north-east of the basin. I provided some possible causes for this difference, including the sharper north- western basin edge. 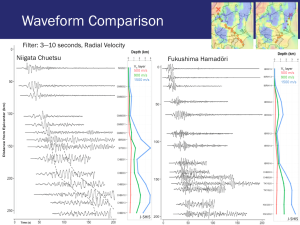 I study physics at my home institution (Reed College, Portland, OR, USA), so I was initially both excited and worried about doing research in a field in which I had no prior exposure. Starting the research from scratch, including learning all the basic terms of seismology, was definitely challenging. However, it was a very rare and worthwhile opportunity to explore a new field. It gave me the confidence to continue exploring other areas of physics to find an area that I would like to pursue in the future. The program was also a great opportunity to learn about University of Tokyo as a research institution, as well as to explore the city of Tokyo.
I would like to thank Friends of UTokyo for the support they have provided, without which
I could not have participated in this great program. I am thankful to Professor Koketsu for hosting me at his laboratory and giving me this opportunity, and to his graduate students for guiding me through the research project. I would also like to thank the staff of the International Liaison Office of the Graduate School of Science at University of Tokyo for organizing the UTRIP program.