“Report from the Scene" by Ito Foundation U.S.A.-FUTI Scholarship Recipients

The Ito Foundation U.S.A.- FUTI scholarship program began in FY 2016, funded by a grant from the Ito Foundation U.S.A. to FUTI. It primarily supports UTokyo students or alumni who plan to study one semester or longer at a U.S. university. For details, please visit https://www.friendsofutokyo.org/ito-foundation-usa-futi-scholarship/
In AY2017-18, 10 UTokyo students and alumni were selected as award recipients. They are currently studying at U.S. universities such as Harvard, Princeton, Columbia, and Georgia Institute of Technology. Their concentration varies widely from politics, society/organizational psychology, film production, landscape architecture and aerospace engineering. They are enrolled in either undergraduate, master’s, or Ph.D. programs.
FUTI has requested award recipients to send essays and photos about their life at the U.S. universities so that they can be posted on the “Report from the Scene” series on FUTI’s Facebook page (www.facebook.com/friendsofutokyo).
The award students’ reports show meaningful exchanges with students gathered from all over the world as well as local residents in the university area, which they find stimulating. Their reports indicate in detail what kind of experience they are having in an environment sharply different from Japan and how they are learning from it. We, at FUTI, feel it deeply gratifying to read their reports.
This year, as Ms. Akiko Sokai is taking a leave of absence, Ms. Yasuko Tanaka (Economics, 2006) has undertaken the project of arranging the reports as a volunteer for us. We sincerely thank Ms. Tanaka for her support.
Please visit our Facebook page at www.facebook.com/friendsofutokyo. If you have a Facebook account, it would be greatly appreciated if you “like”, share, or comment on the posts.
We would like to share with you reports from our three students, Ms. Minami Goto, reporting from the Columbia University Film Department, Ms. Mihiro Nomura, discussing Harvard University experience, and Mr. Kazuhide Okamoto, enrolled in the PHD program of aerospace engineering at George Institute of Technology. For full reports please visit the recipient reports page on our website. 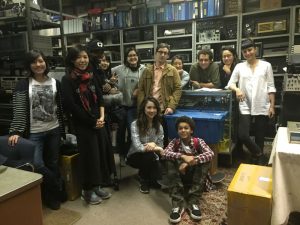 Shooting the graduation project film in  work. With the crew and actors.

I came to the U.S. in the summer of 2015 and started graduate school in New York. Three years have passed in the blink of an eye.
In my current and last year at Columbia, I am learning a great deal about the business of movie production. I am integrating what I have learned in class for the past three years into actual film production. This is truly a transition from a film student to a professional film maker. 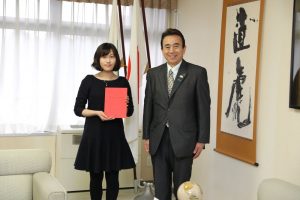 Last fall, I co-produced a short film in New York. My activity included fundraising for the production with an American film director. In January of this year, I managed to direct a short film which was shot in my hometown, Hamamatsu, Shizuoka.  Please see the attached picture which was taken when I paid a courtesy call to the mayor of the city.
I was able to complete shooting of the film, “Breakers” last month whose plan won the 2017 Avec Digital Award. It is scheduled to be screened in Tokyo in June.  http://www.shortshorts.org/2018/topics/news/ja/2836) If any of you are in Tokyo in June, please join us.
I have learned a great deal about filmmaking while working closely with professional filmmakers in the US and Japan and observed the different practices within the two countries. While it was fun at times, it was also challenging. 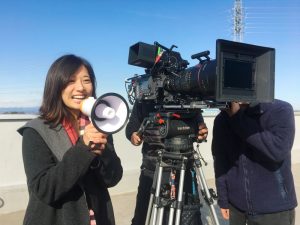 Shooting “Breakers” in Japan. Directing the cast with a mega-phone.

For extra credit, I am joining a study tour of the Cannes International Film Festival in May, led by a Columbia professor. The festival features the screening of top notch films attended by prominent industry professionals from all over the world. It is a huge event where marketers, press, and film professionals converge. I hope to see, feel, and absorb many things there first hand.
Last but not least, I am able to focus on studying and film producing in New York and elsewhere, because of the generous support from the Ito Foundation USA and FUTI. I feel enormously grateful. After graduating from Columbia, I wish to work as hard as I can so that I can contribute to FUTI and help future colleagues to study abroad. 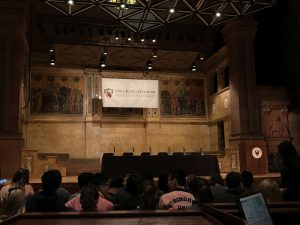 In the spring of 2017, I graduated from the University of Tokyo, Department of Humanities & Social Sciences. And last fall, I started a master’s program at Princeton University in the Department of Environmental Engineering. 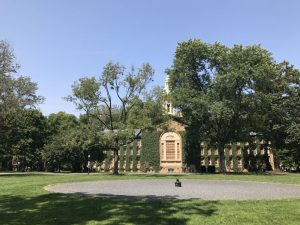 Nassau Hall (the oldest building on campus built in 1756)

Among the courses I have recently taken at Princeton, I found “Environmental Chemistry” to be especially interesting. In this course we analyzed various environmental issues and studied scientific perspectives to help us understand them. As the course’s last project, I undertook the modelling of the Toyosu pollution problem and quantitatively evaluated its risks on human health. I found it meaningful to apply the newly acquired knowledge to the Toyosu pollution issue. The experience gave me self-confidence. 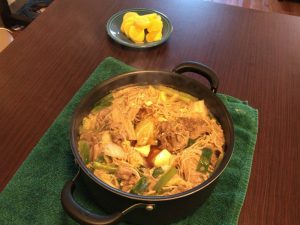 Japanese hot pot that I made with my friends

Inside and outside the university I participated actively in various events. Among them was a Christmas service at a small church in Princeton which was highly memorable. At the end of the service, participants from some 20 countries sang “Silent Night” in their respective mother tongues. I felt a sense of global solidarity transcending national borders. Recently I have been feeling uneasy about trends countering globalization such as Brexit and the election of President Trump, but with the chorus in some 20 languages filling the space with peace, hope and cooperation, I felt a warm feeling welling up in my heart. 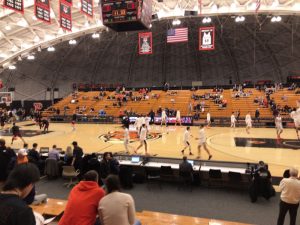 In the coming year, I will continue to do my best to study diligently and to grow as a person. In closing, I would like to thank the Ito Foundation USA and FUTI for giving me such a valuable opportunity to study at Princeton. 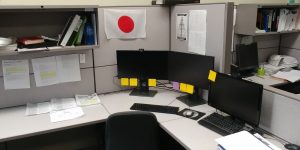 My desk. In our research lab, we hang the flag of our home country. (When a newcomer arrives, the professor gleefully brings a new flag). There are students from the U.S., China, India, Sweden, Canada, and South Korea.

My name is Kazuhide Okamoto and I am a Ph.D. candidate studying at Georgia Institute of Technology, School of Aerospace Engineering.
In 2014 I completed my master’s degree at the University of Tokyo, Department of Aeronautics and Astronautics, and in the same year started my studies at Georgia Tech. 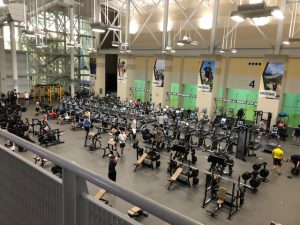 This the gym built around the pool used in the Atlanta Olympics. Beyond the white fabric in the back is where the pool is. This photo was taken in the morning but in the evening it is packed with students.

It is already nearing the end of my fourth year studying abroad and I have completed all the required Ph.D. courses, so my days currently consist of being absorbed in research. My focus is in control engineering in an unstable environment and my research involves using optimal control theory or machine learning to enable, for example, a self-autonomous vehicle to drive through a residential area where a person may suddenly jump out, or a drone to fly through areas with wind disturbance. The average number of years for the Ph.D. program is five years so I plan to graduate after one more year. 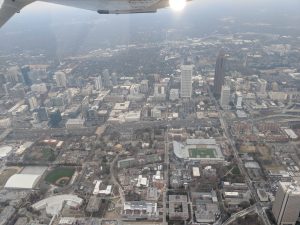 UTokyo and Georgia Tech are similar in that they host research of the highest level, but the expansive campus at Georgia Tech includes a renovated Olympic-size swimming pool which is now a gigantic five-story fitness center, and student housing which used to be the Olympic Village from the 1996 Atlanta Olympic Games. Another attractive feature is the school’s flight club where students can obtain their pilot’s license (I got one myself). UTokyo has renovated their general library and Georgia Tech is also currently renovating their library but supposedly they are going to digitize most of their collection, making it a “book-less library”. Those who are pro-paper however are not happy with this in that to obtain a paper book they must order it first and wait a day. The part where the UTokyo experience clearly outshines the Georgia Tech experience is the food. I often become nostalgic of the taste and affordability of the cafeteria or eateries near Hongo or Komaba. As a result, my home cooking skills have vastly improved. 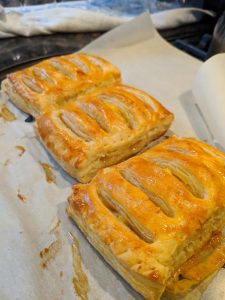 Apple pie which I made myself. The taste of American snacks don’t agree with me so I learned to make many things.

And finally, I would like to thank the Ito Foundation U.S.A. and FUTI for their support. I am grateful for the opportunity to place myself in a stimulating environment and will continue to work hard.