Receptions for GSP and UTRIP Students

This is a report of my participation in the reception parties held in mid-July at UTokyo for the GSP and UTRIP students, and a glimpse of both programs. I am glad to report that all FUTI scholarship awardees in both programs were found to be excellent, proactive and sociable students as we expected in the selection process.

The receptions were held for the undergraduate students from all over the world who are studying at UTokyo during the summer in the GSP and UTRIP programs, which are part of UTokyo’s globalization effort. Mid-July was a convenient time for all students to attend because the students in the first term were about to finish their stays and those in the second term had just started their lives at UTokyo.
GSP Reception:
The GSP welcome and farewell party, which was held on July 11 at the Sanjo Kaikan of UTokyo, started with an opening remark by Professor Kiichi Fujiwara of the International Center.

Ms. Sumiko Ito (far right in the photo) and myself (far left) represented FUTI. Two Yale students and FUTI scholarship awardees, Ms. Julie Chang and Mr. Kelvin Zhou (in the middle), were present. Both took the course on Nanoscience in the GSP program. They were found to be excellent proactive students as expected. Both showed up wearing the UTokyo school color.

One of the flagship activities of IARU is The Global Summer Program, (or “GSP” for short), whose purpose is “to cultivate a sense of global citizenship and leadership.” Each university offers a few courses during the summer. For example, in 2014 UTokyo offered four courses taught in English and attracted the following numbers of students: Japanese Language (9 students who must also take another course), Sustainable Urban Management (14), Japan in Today’s World (12), and Nanoscience (16). The first two courses took place from June 30 to July 11, and the rest began on July 10 and finished on July 18 or 23. For instance, “Japan in Today’s World” covered, after introductory classes on the Japanese political system, the post disaster relief after the great earthquake, and territorial disputes and nationalism, in which students were encouraged to discuss with the professors and among themselves. Each university in IARU sent three to six students to UTokyo. Scholarships were offered by IARU, FUTI and the sending and hosting universities. 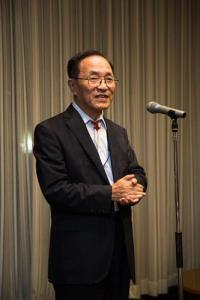 Dr. Emiko Gosho of the University-wide Student Exchange Program (USTEP) Office of UTokyo presided over the party in her fluent English. Although I was asked to speak, representing the FUTI scholarship selection committee, the time seemed pressing and I could only touch upon the following four important items: congratulations to the GSP students; FOTI is now FUTI; more applications for FUTI scholarships; and join FUTI’s Facebook. One student from each university gave a brief remark. Someone took a picture of me while I was talking.

The UTRIP (University of Tokyo Research Internship) Reception was held on July 15 on the top floor of the UTokyo Hospital. It began with an opening remark by Prof. Makoto Gonokami, Dean of the School of Science, UTokyo.

The University of Tokyo Research Internship Program, or UTRIP for short, is an original summer program of the School of Science, UTokyo. It is an introductory program to the research environment, for “internationalization of the School by inviting talented junior or senior students from abroad” for research guided by the faculty members of the School for familiarization with the Graduate School. Five departments, consisting of Physics, Astronomy, Chemistry, Earth & Planetary Science, and Biological Sciences, offer the internship programs.

Daiwa Securities Group Inc. donated a lump sum to establish a scholarship fund eight years ago. This year, five students were awarded the Daiwa scholarship. Daiwa’s Executive Director was invited to give an address. FUTI awarded the scholarship to four U.S. students this year, and Ms. Ito and myself gave talks, representing FUTI. Ms. Chie Sakuta of the International Liaison Office in the School of Science presided over the party in her excellent English and let every student give a one minute speech.

A superb joke had hit upon me, but unfortunately only after my speech. I should have said, “Do you know how FUTI selected the awardees? We selected in the order of difficulty of the names.” As I felt I could speak a little longer than at the GSP reception, I referred, in addition to the four items that I talked about at the GSP reception, to the life’s equation by Mr. Kazuo Inamori (in “A Passion for Success” Kazuo Inamori, McGraw-Hill), a 82-year-old businessman and Buddhist priest who founded the very successful Kyocera and recently rescued the bankrupted Japan Air Lines (JAL). The equation says;

According to him, one’s Ability is “on loan from heaven” to be used for the public good. This constitutes an important part of “Righteousness.” I thought this point was important for the 29 extremely talented students selected by UTokyo out of 495 applicants.

It was important for me, a novice member of the FUTI scholarship selection committee, to get acquainted with the GSP and UTRIP programs, and to meet and speak with the faculty members and students who were participating in the programs. In these two parties, I was impressed by the following points among others. All students, especially FUTI scholarship awardees, looked excellent, proactive and sociable as we had expected in the selection process. I felt I was seeing and talking with world leaders of decades from now.
The future leaders will be one half female and one half Orientals judging from the GSP party, or one third female and 60% Orientals in the case of UTRIP. And the future leaders will speak native or near-native English, regardless of their origins or nationalities. I noticed a certain level of gap in English proficiency between the adults and the students at the parties; all the students commanded fluent English.
Only 20 UTokyo students went abroad to participate in the GSP, while UTokyo accepted 42 foreign students. These numbers should roughly be the same. During the scholarship selection process of applicants from UTokyo, it was noted that many applicants are repeaters. It seems that studying abroad is not necessarily a general desire among UTokyo students. Globalization may need to be further promoted among UTokyo students.
Attending the two reception parties was a really stimulating experience for me.
(Read this article in Japanese)