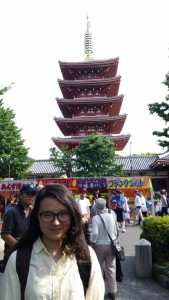 This past summer I interned at Professor Takeaki Ozawa’s laboratory at the University of Tokyo with the help of the generous scholarship offered by Friends of UTokyo, Inc. For someone who thinks of herself as a scientist-in-training, the experience proved to be immensely valuable in allowing me to form a sense of the conditions under which a professional scientist works. My time at the Ozawa lab was often accompanied by excitement at the thought of working to answer a question that has no answer yet—of approaching the unknown with novel tools. This was an endeavor that was made all the more rewarding by the patient guidance of my colleagues—particularly my immediate mentor, Toshimichi Yamada. 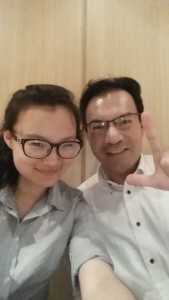 My task at the lab involved imaging the molecule, TERRA (a telomeric non-coding RNA), in its native functional state—that is, within the living cell—as an attempt to define its spatiotemporal properties as well as its interactions with other molecules, which are yet incompletely understood. To do so, we followed a single-molecule tracking method, using total internal reflection fluorescence (TIRF) microscopy. I was deeply impressed by the level of sophistication that the Ozawa lab had in conducting its research; I truly felt that I was surrounded by brilliant young scientists who had the drive and the discipline to pursue worthy scientific questions.
On top of my exposure to Todai laboratory culture, I was also immersed in Japanese culture during my time in Tokyo. I was constantly engaged with Japanese people, who made the interactions very pleasant—so much so that I was never made to feel aware that my foreignness was a shortcoming. On the contrary, I was warmly welcomed by my colleagues as well as by Professor Ozawa. What particularly stood out was the amiability of even strangers (who had no pressing reason to interact with me). I recall the occasion where a fellow diner at a restaurant presented a gift to me as a welcoming gesture as he realized that I was not Japanese. Such experiences of sincere Japanese hospitality left me with the sense that, should I return to Japan, I would never feel alien.
I left Japan with the understanding that in hard-work, patience and discipline, Japanese people are difficult to rival. I truly hope to come back to Japan for graduate studies to learn more from my Japanese colleagues.”