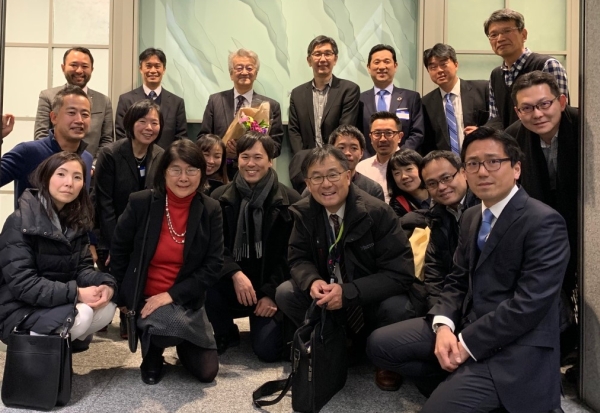 On January 30, 2020, Professor Ito gave the above referenced lecture in mid-Manhattan. The talk was hosted by Satsuki-kai America and co-hosted by Friends of UTokyo and New York Icho-kai.

The lecture was held in commemoration of the 62nd Nikkei Economic Book Culture Award given to “Managing Currency Risk” (Edward Elgar Publishing) which was co-authored by Prof. Ito with Professors Koibuchi, Chuo University; Kiyotaka Sato, Yokohama National University; and Junko Shimizu, Gakushuin University. This book summarizes the results of a research project at the Research Institute of Economy, Trade and Industry, IAA in which Professor Ito worked as a researcher for a number of years until 2015. This project deals with the central theme, “Why the use of Japanese yen does not spread in import and export transactions of Japanese companies?” This question was empirically researched using a method that is unconventional in economics, namely, interviews and questionnaire surveys with companies.

Despite being held on a weekday night, the event attracted more than 20 participants, mainly employees of finance and trading companies, manufacturers, and government officials. Several members of Josuikai, an alumni association of Hitotsubashi University, of which Prof. Ito is an alumnus, also participated.

First, Professor Ito explained the background of his research and the current situation in which “yen-denominated transactions are not widely used” even though “there is wide interest in using yen in international transactions.” In economics, it is common to use published data (including import-export data by the Ministry of Finance). However, available data is grossly insufficient in respect to detailed information by industry. Therefore, Professor Ito and his team decided to conduct a wide range of interviews and questionnaire surveys with Japanese companies.

Based on the answers from the companies and the historical trend of the yen exchange rate, he observed the following:

Participants actively shared their work experience supporting these points. The discussion further covered a variety of topics such as the Japanese government’s currency strategy; the Japanese export industry structure (which tends to be “reliant on the yen” because it cannot immediately reflect currency risk in product prices); Japan’s corporate culture with a weak pursuit of shareholder interests; the decline in competitiveness of Japanese companies; and the future of the Chinese yuan. It was a truly lively discussion reflecting the participants’ extensive involvement in international business.

In concluding the session, Mr. J. Asaki, Deputy President of the NY Ichokai, thanked Professor Ito and commented, “Let’s work together to strengthen Japan’s competitiveness.” Participants thanked Prof. Ito for the lecture and congratulated him for the Nikkei award.