by William Yarinsky
—
I arrived in Japan two days before my Summer Program was due to start. I decided to spend the night in a capsule hotel in Akihabara. It was a great experience as there is no comparable venue in the United States. I could immediately become immersed in Japanese culture and open my mind to whatever the next few weeks would bring.
On my first Monday in Japan I began working in Murayama-sensei’s “Giso Lab” on the Solar Boat project with a team of University of Tokyo students. The goal of the project is to build a composite boat that is solar powered and navigates based on GPS coordinates. 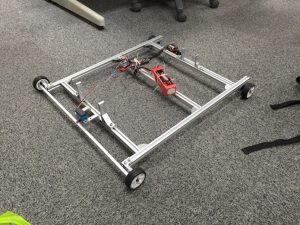 My first task was to design and construct a car module that would be large enough to house a solar panel. This module would give the navigation team of the Solar Boat project a venue with which they could test the navigation system on dry land rather than venturing to a lake for all tests.
To make the car module, we constructed a CAD model based off our sketches. From the model, we built the car out of extruded aluminum channel. This material enabled us to have a huge amount of flexibility with our design. We could fine tune the position of the motor and servo to ensure that they would contact the necessary points properly. This included ensuring that the gears meshed with each other and the servo arm contacted the tie bar. The CAD model was also used to print out schematics directly from the model and use them to fabricate the final parts of the car. To the finished car, a solar panel and voltage converter was added and it drove smoothly under the sun’s power. 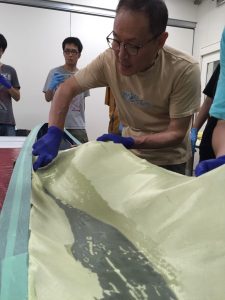 After the car was completed, I began to help the University of Tokyo students build the main hull of the new solar boat. We attended a seminar with a composite professional. He taught us how to change the direction of the fiber’s weave to obtain certain properties (flexibility and strength in different directions) and under his direction we fabricated both halves of the hull. We then stuck the halves together and removed them from the molds. In the end, a few holes were ripped in one half of the hull due to the resin failing to release fully from the mold. While disappointing, this gave us the opportunity to learn how to repair Kevlar fiber. 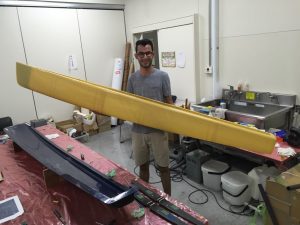 To finish off the hull we added bulkheads to strengthen the Kevlar (as the hull is less than one millimeter thick). These bulkheads were formed out of foam with resin-impregnated Kevlar fiber on each side. Following this, we made two long beams that would support the side hulls (the finished boat will be a trimaran) and the solar panels. These beams were formed of foam with plywood inserts where they will be screwed to the boat and the panels. We covered the foam with Kevlar to add strength and stiffness
That was the extent of our work in the laboratory. Sadly, our program is over before the annual competition in which this boat is used so we were not able to participate in the final construction or competition. 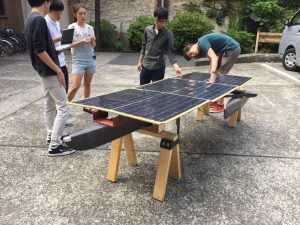 I am excited to see how this experience will benefit me in the future. I hope that the benefits will not only extend to my life as an engineer, but also to my life as a student, and as a person. I know that in addition to the obvious things that I learned (such as how to construct composite structures), the most valuable things will be the relationships that I have formed with the Japanese students and staff here at University of Tokyo. I also realized that I had to reevaluate how I learn when I arrived here. I knew that it was not possible to translate everything and that I would need to extend my academic capacity to wrap my head around solving problems that were foreign to me.
I hope that this experience will help me gain employment at companies both inside and outside of the United States, especially Japan. I hope that I will be seen as a student and engineer who can embrace cultural differences, solve problems, and become an asset to a project. I believe that I have done these things while working in Murayama-sensei’s laboratory. 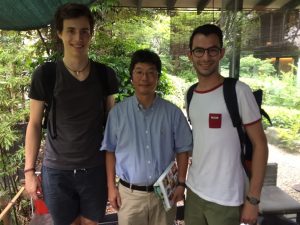 Myself, Professor Murayama, and Stefan Bonhof from TU Delft

In addition to my work in the laboratory, I also had time for some other amazing experiences around Japan. I was able to explore many neighborhoods of Tokyo. I ate delicious food and opened myself up to new experiences. I also was very pleased to be invited to dinner at Professor Murayama’s house. I greatly appreciated the opportunity to meet his family and have a home cooked meal. I also visited Hiroshima and Kyoto before leaving Japan. Both cities were very powerful in very different ways and I believe that they made my trip complete.
I’d like to thank FUTI for enabling me to have this amazing opportunity. I have wanted to visit Japan for years but I did not have a good reason to. I am excited to apply what I learned from Todai and what I gleaned from living in Japan in my life in America. I hope to return soon!
Facebook0
Twitter0
Google+0
LinkedIn0
Pinterest0
Subscribe to the FUTI Newsletter