Ms. Eri Furusawa was awarded the American Institute of Certified Planners Outstanding Student Award in May 2018.  It is granted to one student each year in the Urban Planning master’s program in Columbia University Graduate School of Architecture, Planning and Preservation (GSAPP), as in urban planning programs in other accredited universities, for “outstanding attainment in the study of Urban Planning”. This award was granted not only for high academic performance but also for leadership, teamwork, and the future prospects of contribution to the field of urban planning. This is the most prestigious award given to GSAPP Urban Planning program students. 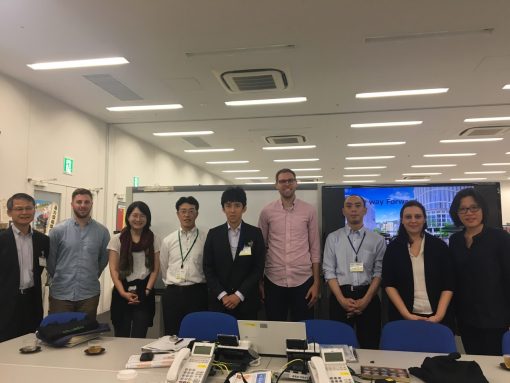 Visit to the Kobe municipal government office during the study tour to Japan. Ms. Furusawa is shown third from the left.

She is a recipient of Ito Foundation U.S.A.-FUTI scholarship in 2016 and 2017, and has finished the second and final year studying urban planning in the master’s course in Columbia University. Starting this June, she works as an urban designer in New York City government. Ms. Furusawa comments, “I hope to learn as much as possible about how planning is conducted in the U.S., then use my experience to contribute to the field of urban planning in Japan. I am deeply thankful to Ito Foundation U.S.A. and FUTI for their assistance and encouragement throughout my time at Columbia.” Dr. Shigenori Matsushita, chair of FUTI’s Scholarship Committee remarks, “we are very pleased that we could support her for two years of graduate work and are genuinely proud of her accomplishment.”
Her position at Columbia granted Ms. Furusawa the opportunity to connect the school and her home country; Professor Ebru Gencer of Columbia GSAPP recently led a team including Ms. Furusawa on a study trip to Japan to discuss disaster-resilient urban planning with Kobe City officials, experts working for non-profit organizations in Kobe City, and academics in the University of Tokyo, Keio University, and Ritsumeikan University. The photo shows the group with Kobe City officials.
Facebook0
Twitter0
Google+0
LinkedIn0
Pinterest0
FUTI 奨学金