One Small Step at NY

by Yuki Haba
—
The Graduate School of Arts and Sciences, University of Tokyo & The Department of Ecology, Evolution and Environmental Biology, Columbia University. 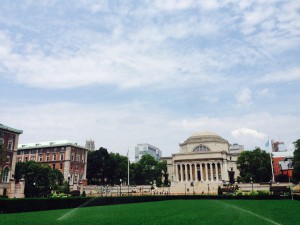 The Beautiful campus of Columbia University 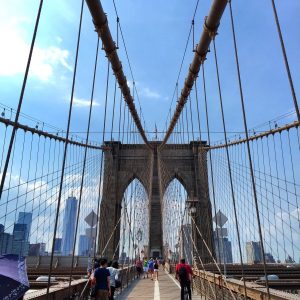 Brooklyn Bridge. In the 1950s, the region under this bridge there were many immigrants who worked on ship container loading.

With a generous support by FUTI, I spent an unforgettable summer at Columbia University, in New York. I just graduated from University of Tokyo this April, and am going to start the graduate school of Biology, at Columbia University from this fall. So, at first, I wanted to learn English in a language school at Columbia University, before starting Master course. I was just concerned about my English speaking and writing skill for surviving the graduate school life, so I applied to the FUTI scholarship, which provides us with great support for summer study. Actually, I had much more precious experiences in the English course, than I’ve expected.
I have to say this summer was not straightforward. When I left Japan, I was too excited to take a bit of sleep in the flight to New York, which I had dreamed for a long time. But just a week after arriving there, I was overwhelmed by the culture, food, people which were totally different from the place where I had lived for more than 20 years. First of all, I had a bad diarrhea (!) in the first five days because of drinking hard water. I could not take any sleep at nights (again). The subways are always late and smell awful. Above all, I could not figure out even 50% of what people are saying. Before coming here, I had been studying English for long, but I realized that was not sufficient. To tell the truth, I almost hated the city of my dream. It was totally different from my hometown. However, as I studied its culture with my friends and teachers, I’m getting to love this city little by little. Here, I’d like to report this precious summer with colorful cultures and people at Columbia University in the City of New York. 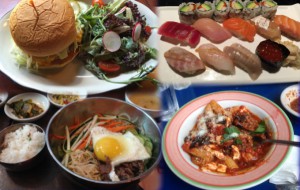 Various food of NYC. American, Japanese, Korean, Italian.. You can get all of these by five minutes’ walk from Columbia. 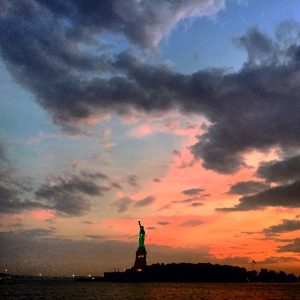 NY Water Taxi 1: The Statue of Liberty in the sunset

First of all, Columbia’s English course is not only about English as a language. Its aim is to let us learn American culture using English. In the Columbia American Language Program we considered and discussed the problems that American people had been and is facing. For example, we studied the American immigrants history, using a play called A View from The Bridge written by Arthur Miller, a very famous playwright. This play draws the tragedy of the poor Italian immigrants family in NY in 1950s. In this age, there were many immigrants from Italy to NY because of sheer recession. During this course, the whole class including teacher went to the Red Hook, where once so many Italian immigrants lived, in order to deepen our understandings of cultural transition in the NY city. These experiences inspired me strongly because I have scarcely studied the culture of America, which is far from my major, Biology. Throughout this session, I became more interested in the culture of America and NY than ever. With this experience, I came to think that I would have to be more interested in other studies. 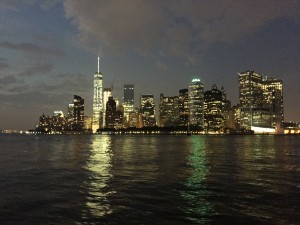 Second, outside the class, there were so many activities for summer school participants. NY city is like a small universe – there is all kinds of foods, museums, musicals, pubs, and anything else. A month is definitely short for us to explore all over the city, but carefully elaborated activities took us the most fascinating places in NYC. For instance, we rode a NY Water Taxi, which took us to a magical trip on the Hudson River. We were able to see all the city in the night from the river! With a glass of wine, I enjoyed the city lights reflecting on the river. At the last of the trip, the Statue of Liberty herself welcomed us. It was such an amazing time ever. 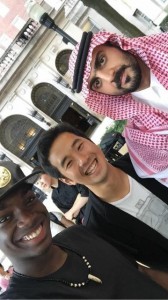 At the end of Ramadan party.

Furthermore, those activities gave us great chances to know other students from different countries all over the world. I was able to make many foreign friends who came from Kenya, Saudi Arabia, Italy, Brazil, Korea, Taiwan and China. Additionally, there were some cultural events. In the middle of session, there was the end period of Ramadan, which is a month of fasting to commemorate the first revelation of Quran to Muhammad according to Islamic belief. So, every Muslims gathered and had a big party to celebrate the end of Ramadan. At Columbia, Muslims shared their joy with every other people!
By knowing other’s religion, I’ve got to understand others’ ways of thinking which were sometimes difficult to accept for me. To understand others is completely different from to know them. It gave me great opportunities to feel the diversity of the world that Columbia University attracts many students from all over the world, mainly owing to the location and its fame in various fields. 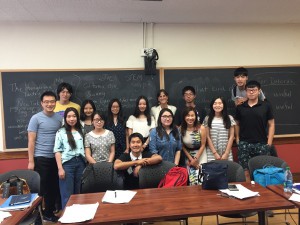 The classmates and the teacher.

Finally, I would like to say that the most important part of this summer was to meet my classmates. Actually, all of the classmates came from Asian countries (China, Japan, Korea and Taiwan), so at first I thought there must be relatively homogenous ways of thinking. However, as our relationship got deeper, I found so many differences between our thoughts. After every class, we discuss many issues surrounding our countries, and sometimes the discussion was lasting to midnight. Of course, we talked about more casual topics like “how do you get a girl/boyfriend in China!?”, which were maybe more important to us…(cough). Thus, throughout the days of the session, we built a strong friendship together, and it’ll definitely last for long in the future. 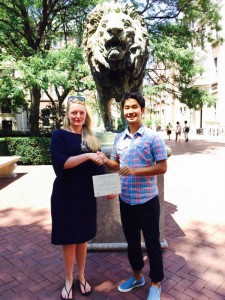 Finally I got the certification in front of the symbol of Columbia, a Lion! With my teacher.

Now, I‘m preparing for the Masters of Biology program at Columbia University from this fall. Of course, English learning is the first step toward my dream of becoming a world-leading scientist. But “that was one small step for a man, one giant leap for me.” Without FUTI’s help, I would not have experienced such great things, which dramatically changed my life. I would like to express my appreciation to FUTI for providing me with the excellent opportunity.
Facebook0
Twitter0
Google+0
LinkedIn0
Pinterest0
FUTI 奨学金