by Yurika Doi
(University of Tokyo, School of Engineering)
— 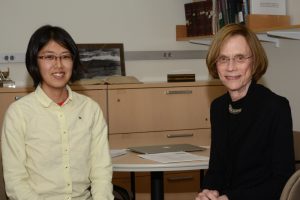 I spent this fall doing research on neuroscience as a visiting student at Graybiel Lab at Massachusetts Institute of Technology. I personally visited Dr. Graybiel and she offered me a position as a visiting student. This was not a university program but FUTI was flexible and supported me with this research internship. I want to thank FUTI for giving me this wonderful opportunity. 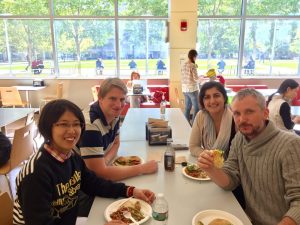 In Graybiel Lab, people study the brain region known as the striatum. The striatum has been known for being in charge of movement control and cognition. I became interested in this brain region because my major is robotics and wanted to know how animals control their movements compared to robots. During my stay, I learned two main things. One is a technique called voltammetry. Voltammetry is an electro-chemical method of measuring the concentration of dopamine, which is a key neurotransmitter in the striatum. How dopamine works in the striatum is important for devising methods to cure movement disorders such as Parkinson’s disease and Huntington’s disease. However the entire mechanism is not known. In the lab, I helped the project that is trying to use voltammetry and chronically measure dopamine levels in the striatum in behaving animals. I learned how hard it is to get clean data from behaving animals and how scientists need to engineer their own devices to do that. The other thing I learned was how to train animals to do behavioral tasks. I had experiences training animals before but the tasks that people use in Graybiel Lab were more complicated and I needed to train animals for longer durations with more caution. I was scared and not comfortable handling them at first but I got used to it day by day. 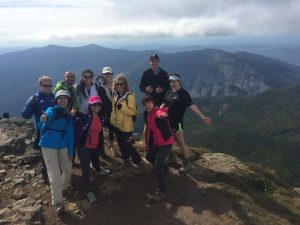 I joined the lab meetings as well. There were two kinds of meetings. One is called a seminar and the other is called the journal club. In a seminar, one lab member reports the progress on their research. I was impressed by how all the lab members were involved in the seminar and try to help the presenter by asking questions and commenting on their research methods and analysis. It was way more interactive and constructive compared to my home lab’s seminars. The lab is very international and more than half people were not native English speakers but they try hard to convey their thoughts accurately and passionately. I learned a lot of new scientific terminology and also how to convey thoughts logically in English. In a journal club, one lab member introduces an academic paper to the rest of the members. Sometimes, the paper is contradictory to what Graybiel Lab has discovered and people get into heated discussion. I was moved by how everyone was serious about science and how everyone has their own perspective. I was also moved by Dr. Graybiel’s curiosity and passion on science. When doing research, I sometimes feel lost because each step of research is so painstaking that I forget my original question and passion. However, Dr. Graybiel always pointed out the original questions and seemed to be enjoying science. Her attitude toward science was quite inspiring for me.
On the weekends, I got to enjoy the majestic nature of the White Mountains with MIT outing club members. The White Mountains are in New Hampshire, which is north of Massachusetts. The MIT outing club has their own cabins and they hold camps once in a while. It was fun to talk with students with different majors while climbing the mountains and I learned that the love of nature is borderless.
Once again, I want to show my deepest gratitude to FUTI for supporting me and I hope to keep the connections that I made this time and go back to MIT again.
Facebook0
Twitter0
Google+0
LinkedIn0
Pinterest0
FUTI 奨学金