My UTRIP 2018 Experience in a Nutshell 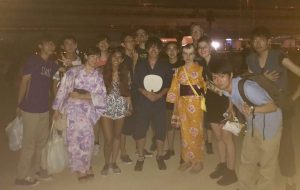 Fireworks with my group

Thanks to the generosity of Friends of UTokyo, Inc, I was able to participate in a six-week internship at the University of Tokyo over this summer. As an intern at the University, I was fortunate enough to be placed in Professor Suto’s group.

As an Astrophysics major at the University of California, Berkeley, I research starspots with Professor Gibor Basri. I have known for a while that I want to do Astronomy research as a career, but I am still not sure which subfield I would like to specialize in. I applied to UTRIP so that I could experience a new subfield of research and gain more insight into what kind of research I would like to focus on.

Though the Suto group resides in the Physics department, my specific project dealt mostly with Astrophysics topics. I worked on developing a method that would accurately determine the rotation period of Kepler stars based solely upon photometric data. I worked primarily in Python, a language I was not very familiar with since the research I do at UC Berkeley is in IDL. Luckily, Kamiaka san, the PhD student I was working with, helped me a lot in getting used to Python syntax. I am very thankful for his patience and help. The work I was doing was complementary to Kamiaka san’s work and is going to be used to help him publish his next paper. 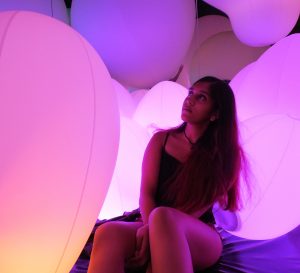 In addition to conducting research at the university, I was also able to explore Japan in my free time. I visited shrines at Nikko, the Cup Noodle museum in Yokohama, Onjuku’s lovely beach, and many more places in and around Tokyo. My fondest memories are of eating Okonomiyaki for the first time at the welcome party my group threw for me, going to karaoke with the other UTRIP interns (as well as a couple honorary interns from Hakusan House), and watching the Adachi fireworks while eating delicious Japanese desserts and drinking unique Japanese wines. I was also able to experience traditional Japanese culture by participating in a tea ceremony while wearing a yukata, a summer kimono. 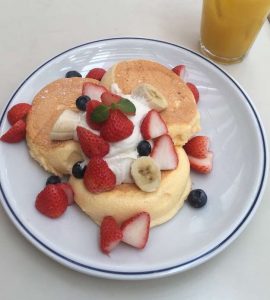 The Most Amazing Pancakes Ever

One of my favorite things about living Japan is the crazy amount of delicious food I was able to eat. I tried sushi, ramen, okonomiyaki, takoyaki, and even Japanese fluffy pancakes. Out of all the food I ate, ramen is my most favorite. I made it a goal of mine to try as many different types of ramen as I could. I tried ramen with a seafood-based broth, ramen with fried chicken in it, the local ramen around my dormitory, and even Michelin Star ramen. I miss Japanese ramen so much that I have actually been craving it ever since I returned to the States.

Overall, UTRIP was by far the best internship experience I have had. I enjoyed every minute of exploring Tokyo and also working on my research project. I am also incredibly lucky to have met the most amazing people during my time in Japan. Not only did become friends with all the other UTRIP interns, I was also able to become close with the other researchers in my group. I am extremely thankful to FUTI for helping me to subsidize some of the costs of attending the UTRIP program and would recommend this program to anyone who loves doing research and enjoys exploring.