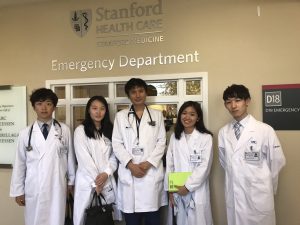 Shadowing with Dr. Mitarai at Stanford Emergency Medicine (Me on the left)

The three weeks at Stanford was full of hands-on experiences and first-hand exposure to US healthcare. In this report, I would like to summarize my studies there, but before that I would like to express my sincerest gratitude for giving me this opportunity. Without FUTI Summer Scholarship, this would not have been possible.

Through the MED program at Stanford, I saw and talked with a lot of medical professionals in the US, activists or caregivers, lovely Stanford undergrads fellows, and Asian medical students who have various interests and their own stories. In the US, there are patients from way more diverse backgrounds, and approaches to each healthcare issue were also unique. For example, LGBTQ+ equality has become a hot topic for me since I attended several events and lectures during the program. One unforgettable program was a talking session with John & Stuart from Marriage Equality and Shirley & Jay – wonderful two mothers of our Stanford program fellow Joriene! They passionately and sometimes quietly talked about their story. Behind them I could see their life and love, which were accomplished after having had a very hard time. I was inspired by John’s words “You’re great just the way as you are. You don’t have to change.” – will I be able to say something like this to my patients? LGBTQ+ issue should be tackled to move public health forward, for they are vulnerable to certain diseases including depression, STIs, HIV etc. Suicide is prevalent among school age sexual minorities. Despite the fact that LGBTQ+ population needs better healthcare, they are underserved in most cases, or they can even be target of discrimination. We also had an opportunity to visit Strut in Castro, which is an innovative community center for everyone more than a mere clinic for sexual minorities. There I could discuss how they address health issues that are common among LGBTQ+. 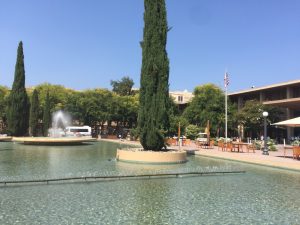 Another topic we focused on was mental health. In the Mental Health Panel, 5 speakers shared their story with us, all of which are full of reality. People become mentally ill for various reasons such as solitude, drug abuse, working too much, losing loved ones etc. Through the session, I learned that keeping asking questions and listening will be the key to cope with these mental illness – just listening sounds easy, but is important skill that we have to consciously working on in our life. They also introduced NAMI (National alliance on Mental Illness)’s care team and family-to-family classes, which I found to be more evidence-based and well-structured.
One more memorable program was the visit to the Mission Hospice. I talked with a physician there, and she told us that since the End of Life Option Act went into effect in 2016, there has been an explosion of discussion on palliative medicine. Heartwarming terminal care for both patients and their families is thought to be important because it contributes to better distribution of healthcare resources as well as peaceful ending of one’s life. If you spend your last days in ICU, you may be charged thousands of dollars only to find yourself connected to a bunch of tubes at the last minutes of your life. In the Mission hospice, patients can participate funding according to their means. They are also offering a bridge program, which is to help low-income people access hospice care. All these facts are reflecting the features of US healthcare but at the same time had a lot of implication for terminal care in Japan. Beside these topics, MED program also covered numerous topics including organ transplantation, US health insurance, healthcare for undocumented migrants, social aid for the unhoused and so forth. 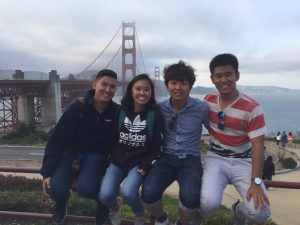 With Stanford fellow students at the Golden Gate Bridge (from left Joriene, Allison, me, and William)

I used to think that it’s important for public health studies to find patterns or rules that people have in common, but now I think it’s also very important to carefully listen to and dig into differences among people such as religion, belief, sexual orientation, ethnicity, value etc. because I now better understand that these differences have a profound impact on one’s health. I want to be a public health physician with this attitude, otherwise I might come up with ideas or theories that look good on paper but won’t work. What ‘socioeconomic status’ means to me has become even broader.
Physician shadowing in Stanford Medical Center was also one of the highlights during this program. Though I don’t know much about Japanese healthcare facilities, I could find a lot of features of streamlined emergency care in Stanford. I think this experience will be more and more meaningful once I start my clinical training because I can then compare US and Japan. In addition to shadowing, we also had lectures on Clinical English, physical examination, medical education in US etc.
Understanding the importance of what is not visible, I think, is really difficult without any first-hand experience on our own. Sometimes its importance tends to be overlooked, but ideal healthcare should be realized by combining both scientific evidences and deep understanding of human being. In this meaning, my view on public health and medicine has become more wholistic, comprehensive one by this program. Also, through the program I got many friends and lecturers who will be staying touch with each other. They will be my future comrades who will work together to make the world healthier place.
Facebook0
Twitter0
Google+0
LinkedIn0
Pinterest0
FUTI 奨学金