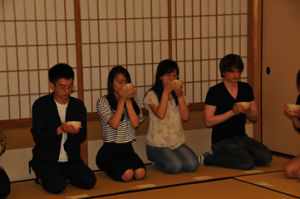 I’m extremely grateful to FUTI for their generous scholarship that allowed me to participate in the Global Summer Program at the University of Tokyo. It’s impossible to overstate my excitement of finally visiting Tokyo where so much history that I have learned in class actually took place. There is so much satisfaction just wandering along the streets of a city that lives with history. Each period left its mark: the exquisite Edo, the turbulent Meiji, the prosperous late Showa and the uncertain Heisei which we are now living through. At the university, I took a course titled “Japan in Today’s World” directed by renowned professor Fujiwara Kiichi. The faculty and staff at the University of Tokyo carefully put together a two-week-long program that properly guided our effort to comprehend this historical process, not only as aspiring historians and political scientists, but also as global citizens that will take it upon ourselves to promote a peaceful and just world, and, of course, as friends of Japan. 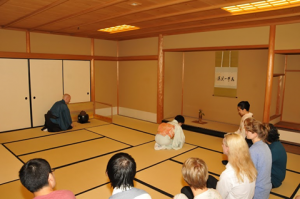 Heterogeneity was what impressed me the most: the traditional spirit of harmony of the tea ceremony, the corporate and political culture in reform, the stunning soft power of anime (which was particularly prominent on a weekend when the world was obsessed with Pokémon Go), as well as young people’s street speeches on the election day coexist in today’s Japan. The diverse background represented in the classroom provided us with a perfect gateway to look into this complexity.
As we were discussing about youth subculture and student action in class, I got to know a UTokyo doctoral student who was in fact a member of the Students Emergency Action for Liberal Democracy (SEALDs), a person highly passionate for her literary study but also dedicated to public life, democracy, equality. Listening to her vision for the future Japan was a great inspiration for me: it does not suffice to just analyze and talk about problems and solutions — which is usually the preoccupation of someone aiming for the academia – we need to be the agent of change ourselves.
In the last class, we debated on the Senkaku/Diaoyu island dispute, with Japanese students playing the Chinese government and all other students playing the Japanese counterpart. We all were able to look at the issue from other perspectives and become more critical of each government’s claim on the territorial dispute. It is also the culmination of a series of lectures discussing the interplay between Japan’s domestic politics, economic development, and foreign policies, particularly in terms of its relations with China, which, to be frank, have not been particularly amicable. Therefore, this is also the chance for me to really ask myself how the two countries could overcome historical enmity. 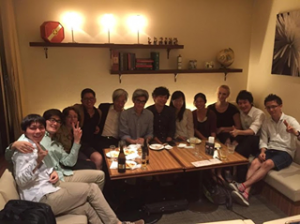 The answer, in my opinion, is the necessity to cooperate in order to figure out the best and most just way to solve the global challenge we are facing together. Neither the Cold War alignment, the winning-losing alignment, nor East-West alignment would help. The week when we were in Tokyo was an eventful one, perhaps the most violent one that many of us have ever experienced. Therefore, I found our discussion on the future of the Peace Clause in Japanese constitution even more significant. Hearing about how Japanese understand peace in the international community, which was mostly missed from both Chinese and American media, was really illuminating. I traveled to Hiroshima after the course ended, and I was left further in awe by a city that makes peace as its motto. I sincerely hope that Japan’s experience in democratization, modernization and pacification could contribute more to contemporary global challenges.
However, as much as I am impressed by the commitment of Japanese people to peace, I know words alone do not bring peace. As I left Japan, I will return to my study of history, but my experience in Japan will never leave me. It has reaffirmed my decision to study the history of Sino-Japanese relation, and, with proper historical understanding, to facilitate the cross-cultural cooperation among China, Japan, and the US in the international arena. It is important to understand history and deal with its facts and significance, but it is also imperative to learn to put it behind and look ahead.
Last but not least, I would like to thank FUTI again for giving me the opportunity to have such a rewarding experience. I’m really looking forward to coming back to Tokyo again.